Fine particles (those smaller than 2.5 microns) penetrate more deeply into the lungs than coarse particles those between (2.5 and 10 microns). Health studies indicate a link between fine particle concentrations in outdoor air and certain health effects. These include premature death in people with heart or lung disease, nonfatal heart attacks, aggravated asthma, decreased lung function, and increased respiratory symptoms, such as irritation of the airways, coughing or difficulty breathing.

Particulate matter pollution can cause reduced visibility (haze) in parts of the United States, including many of our treasured national parks.

Particles can be carried over long distances by wind and settle on the ground or water. This can make lakes and streams acidic, change the nutrient balance in coastal waters and large river basins, deplete the nutrients in soil, damage sensitive forests and farm crops, and affect the diversity of ecosystems.

Particle pollution can also stain and damage stone and other materials, including culturally important objects such as statues and monuments.

Where it Comes From

Fine particles are directly released from construction sites, unpaved roads, fields, smokestacks or fires. Others form in the atmosphere by complicated reactions of chemicals such as sulfur dioxides and nitrogen oxides that are released from power plants, industries and automobiles. These particles, known as secondary particles, make up most of the fine particulate in the country. 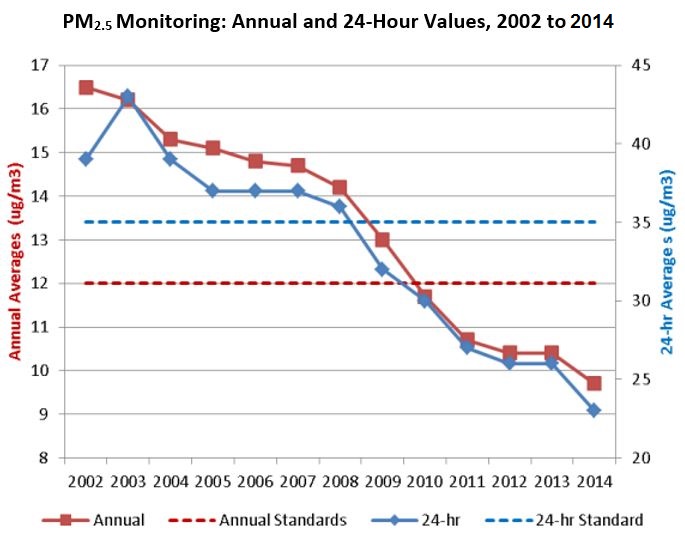 Delaware has permanent air quality monitors in all three Delaware counties which measure a variety of pollutants and other factors. The state uses data from these sites, and from portable monitors used for special studies, to measure Delaware’s air quality against the national standard, assist in developing air pollution controls, detecting trends, and providing a rich database for the next review of the National Ambient Air Quality Standards (NAAQS).

As of summer, 2014, Delaware has met the national air quality standards for particulate matter in all three counties.

Delaware’s dramatic air quality improvement since 2001 is a direct result of the stringent federal and Delaware-specific control measures put into place over the years. The federal and state measures have had the combined effect of reducing post-2002 emissions of ammonia by 52 percent, sulfur dioxide by 95 percent, oxides of nitrogen by 47 percent, organic compounds by 17 percent, as and particulate matter by 17 percent.

A micron (the abbreviated for of “micrometer) is a unit of measurement that equals a millionth of a meter. This equal to about 0.00004 inches. A human red blood cell is about 5 microns in width.