American kestrel populations in Delaware have declined. Once commonly seen perched along telephone wires and fence posts, this falcon is now a rare sight across our state. The DNREC Division of Fish and Wildlife works to study and manage the state’s population of American kestrels.

According to the USGS Breeding Bird Survey, populations of American kestrels have declined more than 88% in the Mid-Atlantic region over the last 50 years. These declines are what led DNREC to list the American kestrel as state endangered in 2013 and as a Tier 1 Species of Greatest Conservation Need in the 2015 Delaware Wildlife Action Plan.

The DNREC Division of Fish and Wildlife and its partners in the Delaware Kestrel Partnership are working to study this raptor and find ways to reverse that decline. They offer volunteer opportunities for citizen scientists.

Read more about the American kestrel, and the Partnership, in a story in Outdoor Delaware.

About the American Kestrel 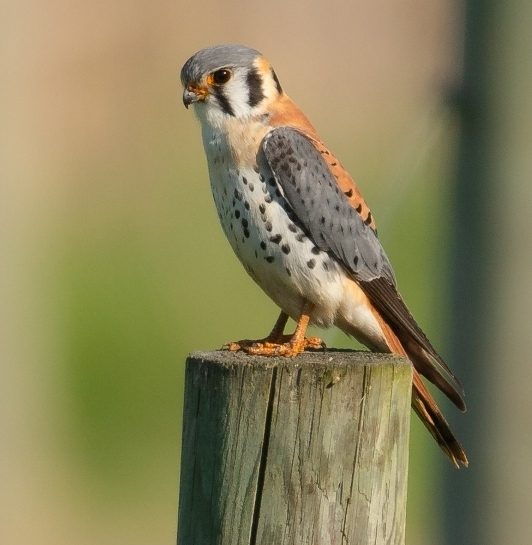 American kestrels are found across North and South America. They prefer open habitats such as meadows, grasslands, open parkland, agricultural fields and even deserts. These habitats usually feature short ground vegetation with sparse woody vegetation, trees with cavities to nest in and plenty of perches.

American kestrels are often seen hunting from a perch in a “sit-and-wait” fashion or hovering over prey in a field before striking.

American kestrels are obligate secondary cavity nesters, meaning they must use natural cavities or those created by woodpeckers to nest. They prefer cavities that do not have vegetation or branches covering the hole. Kestrels will not use nesting material and instead create a scrape or depression in the cavity floor.

In 2016, the DNREC Division of Fish and Wildlife joined Delaware State Parks’ Brandywine Zoo to create what is now the Delaware Kestrel Partnership. The Partnership was created to study North America’s smallest falcon, the American kestrel, to investigate their declining population.

The Delaware Kestrel Partnership has installed more than 70 nest boxes on public and private lands — in open areas such as meadows, grasslands, pastures and other agricultural fields.

The nest boxes are installed on 4×4 poles or on existing structures such as fencerows or barns. Ideally, kestrel nest boxes are not within 50 yards of a tree line, to reduce predator access, but are within 100 yards of perching opportunities such as power lines, fencerows and snags (dead trees).

The Partnership thanks all the landowners who allow use of their property for this research. A few of the largest landowner partners include Delaware State Parks, The Delaware Nature Society, Delaware Wild Lands, Mount Cuba Center, The University of Delaware and Winterthur Museum, Garden and Library.

If you are interested in building a nest box for the program, hosting a nest box on your property, or if you know of a location that may provide good habitat, please contact Jordan.Brown@delaware.gov. 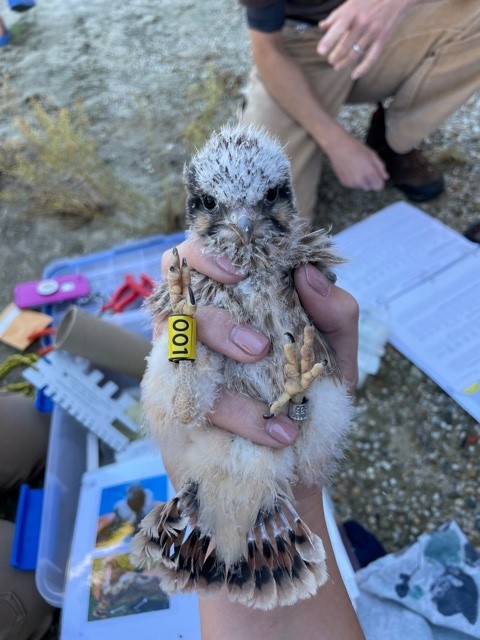 Biologists and other researchers sometimes outfit birds with unique markers to help identify individuals and track their movements.

Since the start of the Partnership, researchers have put USGS aluminum leg bands on adult kestrels and their chicks. However, these bands are small and difficult to read from far away.

As of 2021, the Partnership has begun applying colored bands on kestrels, making them easier to read and making it easier to identify individuals. These bands are bright yellow with black letters and have a three-digit number on them (e.g. “001” or “025”).

If you see this band (likely through binoculars, spotting scope, or camera) please report it to the USGS Banding Bird Lab. The lab creates sighting reports for the state.

In 2022, the Delaware Kestrel Partnership monitored 69 nest boxes across the state from March through July.

Volunteers observed American kestrels at 19 of these nest boxes and breeding pairs at ten. A total of 35 eggs were laid, producing 27 chicks, all of which were banded with both USGS and yellow legs bands.

Three individuals were previously banded — two were banded previously as nestlings in Hunterdon County, New Jersey. Information on the third bird is pending.

In 2021, the Partnership monitored 58 nest boxes and found American kestrels at 18, with breeding pairs at seven. There were 35 eggs in 2021, producing 24 chicks. 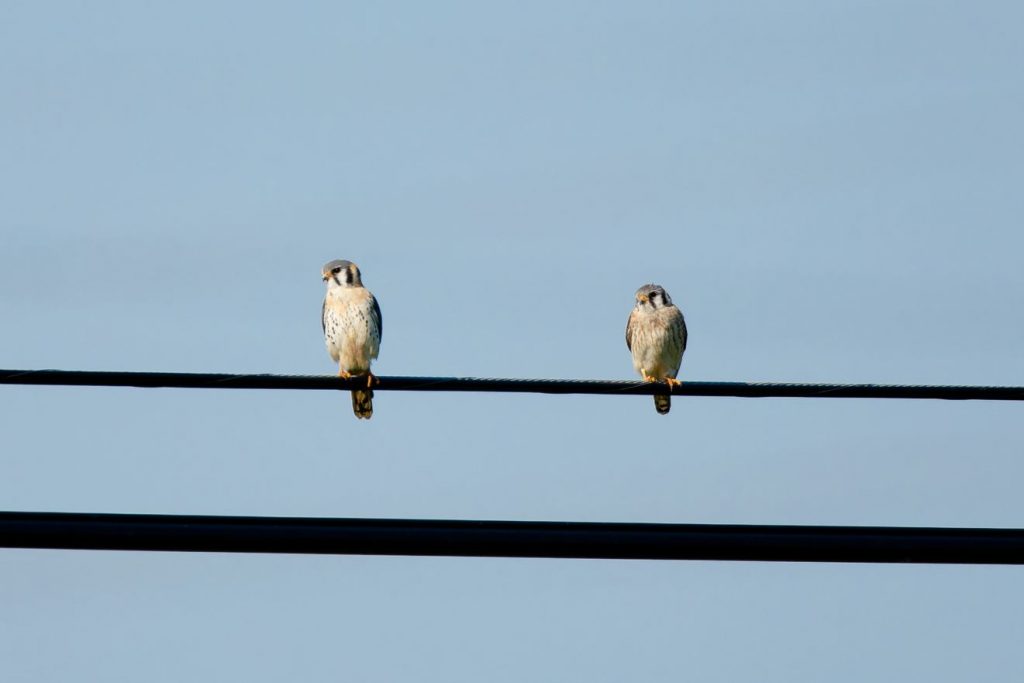 Kestrels are often found perched on utility wires and fencerows where they have a better view to hunt. Look for their signature “bobbing tail” while they stabilize themselves on their perch.

If you see a kestrel, please log your sightings at www.eBird.org and include as many details as you can (sex, location, behavior, etc.) from your observations.

You can report both USGS aluminum leg bands and colored bands to the Banding Bird Lab.

To read an aluminum USGS band, you will need to physically have the bird in hand. If you find a dead kestrel with a leg band, please make every effort to report it. If you find an injured kestrel, please call Tri-State Bird Rescue at 302-737-9543. They will report the band.

To report a color band, select “Color Marker Only” on the Banding Bird Lab site and answer the questions on that site.

The colored bands on Delaware birds are placed on the bird’s right leg with a yellow marker. The color code is black. Please also enter the number.