You can help DNREC research and manage the local population of Atlantic sturgeon, a rare and endangered fish. Simply use our reporting form to let us know of any interactions you have with this fish.

You may see live or dead Atlantic sturgeon while you are out on the ocean or any of the state’s bays. When this happens, we want to know about it.

Atlantic sturgeon date back more than 70 million years. They are found in coastal rivers and waters along the Atlantic Coast from Labrador, in Canada to the St. Johns River, in Florida.

Sturgeon have five rows of bony “scutes” running the length of their body. They have four sensory barbels in front of an extendable mouth with no teeth.

Atlantic Sturgeon are anadromous, meaning they use freshwater rivers for spawning and marine environments for growth and migration. Males usually mature in 12 to 14 years. Females tend to mature in 18 to 20 years.

Adults ascend large coastal rivers for spawning in April and May and spawn at water temperatures from 55 to 65 degrees.

After hatching, juvenile sturgeon remain in estuarine waters for several years before moving into coastal waters.

The Delaware River once supported the largest and most profitable Atlantic sturgeon fishery along the Atlantic Coast. However, overfishing of spawning adults, poor water quality and by-catch of juveniles in other fisheries caused the population to collapse by the end of the 1800s.

The population stayed low and in 1998 a coast-wide moratorium on the fishery was put in place to restore Atlantic sturgeon spawning stocks. The goal is to restore the population to levels which will provide sustainable fisheries and ensure viable spawning populations.

In 2012, Atlantic sturgeon were added to the Endangered Species List. Portions of the Delaware River were determined to be critical habitat in 2017. 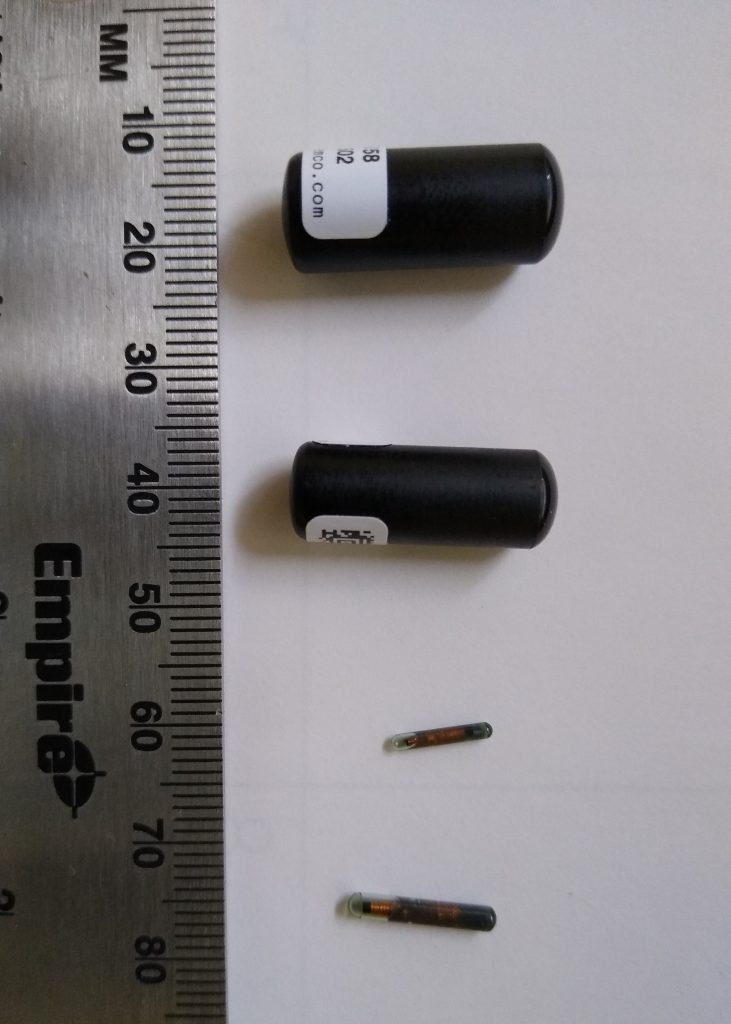 The DNREC Division of Fish and Wildlife is part of a multi-state collaborative project to study and manage the fishery.

The Division conducts juvenile abundance surveys of Atlantic Sturgeon in the Delaware River to monitor population levels and evaluate spawning success. The survey uses small-mesh gill nets to capture fish that hatched over the past two years. The number of fish caught is used to estimate the population size for these young year classes.

Telemetry tags (pictured) and a network of acoustic receivers in the Delaware Estuary allow biologists to track the movement of tagged fish from initial release through the life of the tag, usually one to two years but up to ten years for larger fish.

Data from the tags let biologists identify areas of high concentrations of juvenile sturgeon and important nursery grounds in the Delaware River.

This information helps environmental programs protect the habitat needed for survival and recovery of the sturgeon population.

DNREC staff also conduct research in the Nanticoke River watershed in cooperation with the Maryland Department of Natural Resources. It is believed that there is a very small spawning population in the watershed and any reports of sturgeon in this area would be very helpful.

Your Help Is Valuable

You can help scientists learn more about this species by reporting any sturgeon sightings (dead or alive) or interactions with the fish in Delaware waters. All reports are strictly confidential.

Interactions may include seeing a sturgeon washed up on a beach, or even watching a swimming sturgeon.

All interaction information is valuable. Please take note of the location, the length of the fish, and the presence of any tags. If you find a sturgeon with a tag, please write down the tag number and call the number printed on the tag. Tag returns provide important information about the species.

If possible, take a photo of the whole fish and one of its mouth (juvenile Shortnose and Atlantic sturgeon appear very similar, the shape of the mouth is the easiest way to determine the species at younger life stages). Photos are also helpful for determining what may have happened to the fish.

Your reports provide valuable data about the population needed to make informed decisions on actions that may impact Atlantic sturgeon in Delaware.

For assistance with the form, please e-mail the DNREC Fisheries Section, at Sturgeon@delaware.gov or call 302-735-8663.