While Delaware’s coyote population remains relatively low, coyotes have been documented in each of the state’s three counties. Coyotes (Canis latrans) have been expanding across the continental United States since the mid-1900s and are now found in 49 of the 50 states, with only Hawaii not having a coyote population. Delaware is recognized as the 49th state populated by the species. 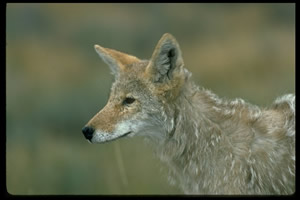 Though Delaware’s coyote population is small compared to the state’s more commonly-found species such as red fox and raccoon, coyotes have been confirmed here by trail camera photographs, occasional animals struck and killed by vehicles, sightings from the public and hunter- and trapper-reported harvests.

Anyone who harvests a coyote in Delaware must report it to DNREC’s Division of Fish and Wildlife within one business day (not including weekends and state holidays) by calling 302-735-3600 (ext 2). Harvest data is used by state wildlife biologists to help monitor and manage the coyote population.

In 2014, a statewide hunting and trapping season was established for coyotes as well as a year-round Coyote Depredation Order that allows landowners to harvest coyotes when there is an imminent threat of them causing injury to humans, livestock or domestic animals. Annually, fewer than five coyotes are harvested in Delaware.

What You Should Know

If you enjoy seeing coyotes and want a closer look at them, use binoculars! Never put food out to lure them closer. Nearly all bites or attacks occur when people attempt to feed wild animals or to treat them like domestic animals. Enjoy watching wild animals, but don’t lead them into temptation. Remember, all wild animals are unpredictable and caution is the watchword when they are around.

With an exception for vehicular contact, taking the steps below may decrease coyote encounters in areas where they have been sighted. However, coyotes are adaptable to change and quick to learn new ways of survival. But by making life less endurable for coyotes in your area, you can increase the likelihood that they will go somewhere else.

Do not feed coyotes, and eliminate standing sources of water for them.

Elevate bird feeders so that coyotes can’t get at them. Coyotes are attracted by bread, table scraps, and even seed. They may also be attracted by birds and rodents that come to the feeders.

Do not discard edible garbage where coyotes can get to it. Also: secure garbage containers.

Discourage coyotes from cohabitating with humans. If you see them around your home or property, chase them away by shouting, making loud noises, or by throwing rocks at them. 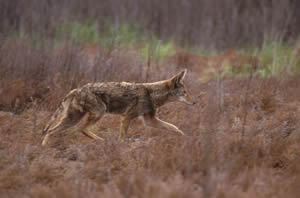 Most coyote sightings occur around sunrise and sunset. Adult coyotes weigh from 20 to 45 pounds, with females generally smaller than males. Coyotes look somewhat like small collie dogs. They have erect pointed ears, a slender muzzle, and a bushy tail usually held low to the ground. Most coyotes are brownish gray in color with a light gray to cream-colored belly.

While coyotes have reached Delaware, and been here for at least 10 years, many reported sightings in the last year are thought to have been the misidentifying of dogs and red foxes as coyotes.

Historically, coyotes were most common on the Great Plains. Their range now extends from Central America to the Arctic. Except for Hawaii, coyotes live in all U.S. states, Canada, and Mexico. Coyotes have only recently began to inhabit Delaware and Maryland. Due to Delaware’s geography (a peninsula), coyotes have been slow to range into the state from the North. But Delaware definitely has a share of the coyote population; whether it’s a proportionate share to surrounding states remains to be determined.

In spite of being hunted and trapped for more than 200 years, more coyotes exist today than when U.S. Constitution was signed. Hardly any animal in America is more adaptable to changing conditions–the coyote can live in deserts, swamps, tundra, grasslands and dense forests, from below sea level to high mountains. They have now learned to live in suburbs and cities.

One of the keys to the coyote’s expanding existence is its diet. A true scavenger, the coyote will eat just about anything. Identified as a killer of sheep, poultry and deer, the coyote will also eat snakes and foxes, rodents and rabbits, fruits and vegetables, birds, frogs, grass and grasshoppers, pet cats and cat food, pet dogs and dog food, carrion, and just plain garbage.

Coyotes are active mainly during the nighttime, but they may move about at any time during the day.

A high reproductive rate and rapid growth of offspring aid in the coyote’s success. Coyotes breed in February and March and pups are born about 60 days later. An average coyote litter contains four or five pups. Pups are born in dens. In urban environments, dens can be in storm drains, under storage sheds, in holes dug in vacant lots, parks, or golf courses, or any other dark, dry place.

Pups are cared for by both parents and can eat meat and move about well by the time they are a month old. Because food requirements increase dramatically during pup rearing, this is a period when conflicts between humans and urban coyotes are common. By the age of 6 months, coyote pups have permanent teeth and are nearly fully grown. This is when mother coyotes train their offspring to search for food, so it’s not unusual to see a family group traveling together. If people provide food, intentionally or by accident, the youngsters quickly learn not to fear humans and will develop a dependency on easy food sources.

Usually in October and November most young disperse and find their own breeding territory, but one or two pups may stay with the parents and become part of the family group. Although coyotes tend to travel and hunt singly or in pairs, they may form groups as population densities increase or because they have found abundant food, such as in urban areas.

In areas where they are hunted or trapped, coyotes are extremely wary of human beings. However, in urban areas, where they are less likely to be harmed and more likely to associate people with an easy and dependable source for food, they can become very bold. They will come up to the door of a house if food is regularly present.

Coyotes have learned that small dogs and cats are easy prey. There have been numerous incidents across the country (but none reported in Delaware) of coyotes harassing leashed dogs on walks with their owners near parks and golf courses within city limits.