There are five species of tick commonly found in Delaware. Identifying which tick has bitten you can help you take steps to protect yourself. There are also a handful of arthropods that are sometimes mistaken for ticks.

Most ticks of medical importance are called “3-host ticks” because they need to find and feed on three hosts to complete their life cycle: once as a larva, once as a nymph, and once as an adult.

The five most common tick species found in Delaware are the Lone Star Tick, the Deer/Blacklegged Tick, the American Dog Tick, the Gulf Coast Tick and the Asian Longhorned Tick. Different ticks can carry or cause different health issues for humans.

Tick species can be identified by looking closely at their mouthparts and scutum (the shield that forms their back).

Lone star ticks are the most common tick species in Delaware, especially in Kent and Sussex Counties.

They are found in spring, summer, and early fall in a variety of habitats.

They are vectors of the pathogens that cause ehrlichiosis and are also associated with a condition called alpha-gal syndrome (mammalian meat allergy). 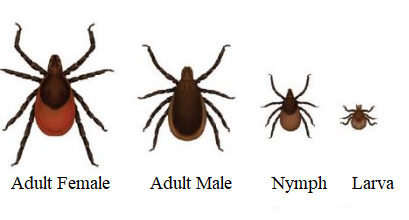 They are vectors of the pathogens that cause Lyme disease, anaplasmosis, and babesiosis.

American dog ticks are common in meadows and other areas with tall grasses. Only adult dog ticks bite humans; larvae and nymphs feed only on wildlife hosts.

They are usually encountered in late spring and summer.

They can vector the bacteria that cause spotted fever.

American dog ticks can be identified by this combination of features: 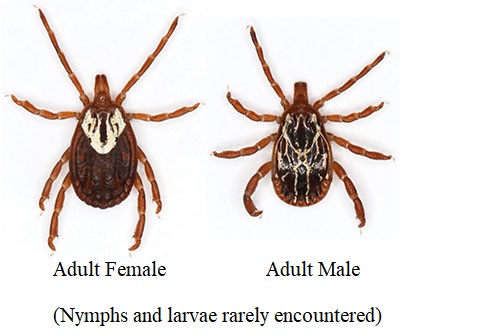 Gulf Coast ticks are found in meadows and wetland areas in late spring and summer.

They can transmit bacteria that cause spotted fever.

Asian longhorned ticks are found in a variety of habitats in New Castle and Kent Counties during the spring and summer. They infrequently bite humans and are more likely to be seen on pets or livestock. 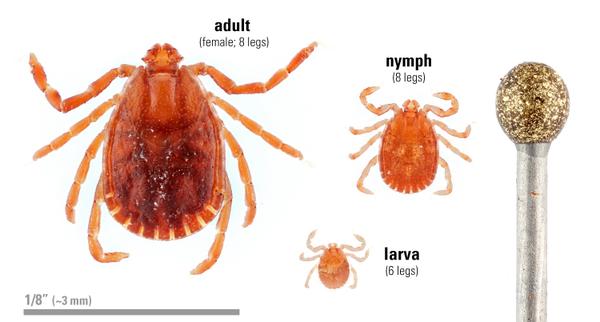 To date, they are not associated with any medical conditions in the United States.

In addition to the 5 commonly seen species listed above, Delaware is home to the following species which rarely bite humans:

These arthropods are sometimes mistaken for ticks, but you can use the following features to tell them apart. Keep in mind that ticks are wingless, have eight legs, and do not have antennae. (Thanks to photographer Matt Bertone for the photos in this section) 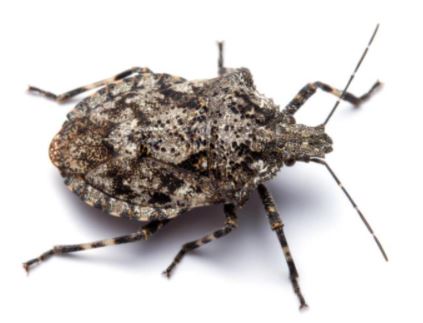 Stink bugs are insects, so they have six legs, wings, and antennae. 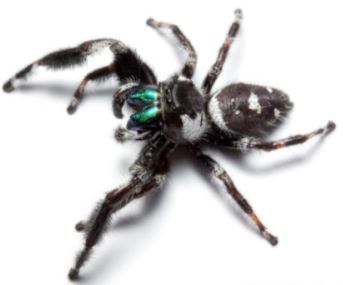 Like ticks, spiders are arachnids and have eight legs. Spiders are usually larger and are often associated with webs (ticks are not found in webs). 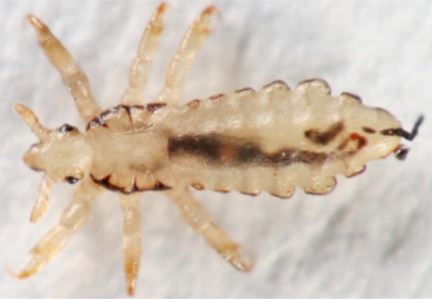 Both ticks and lice are flat and wingless, but lice have a longer body shape and only six legs. And lice have and antennae, which ticks lack. 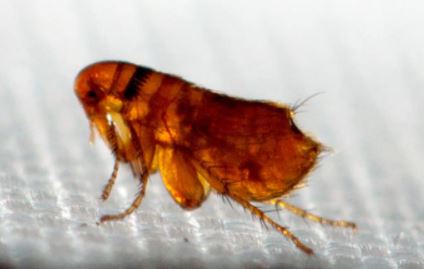 Both ticks and fleas are flat and wingless, but fleas are powerful jumpers. Ticks cannot jump. Fleas are insects and have only six legs. 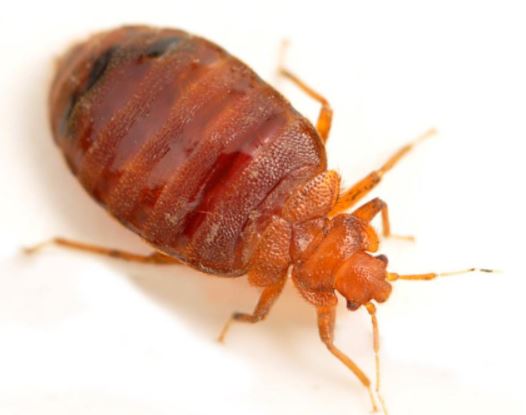 Both ticks and bed bugs are flat and wingless but bed bugs are insects, so they have six legs and antennae. Ticks are encountered outdoors whereas bed bugs are found indoors, typically on or behind furniture.

Weevils and Other Beetles 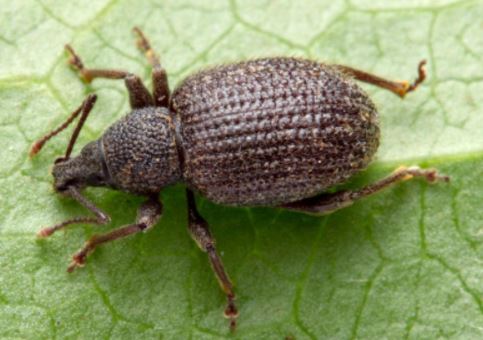 Some small beetles can be mistaken for ticks. Beetles are insects, so they have six legs and antennae. They also have wings. Ticks are wingless. 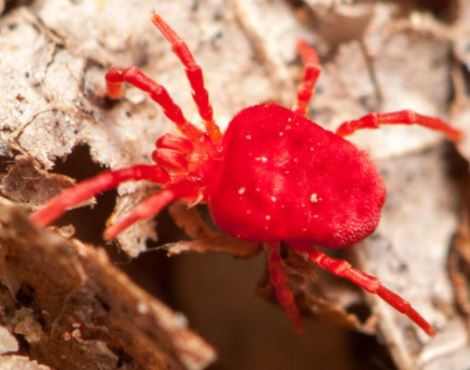 Ticks and mites are both arachnids and share many features such as eight legs and small body size.

In fact, technically speaking, ticks are mites, but there are thousands of species of harmless mites that are not ticks.

Most of these other mites are smaller than ticks (usually too small to see without a microscope). The larger ones that are visible to the naked eye, such as this velvet mite, can be distinguished from ticks because they are soft. Ticks are protected by a hard exoskeleton.

Mites belonging to the family Trombiculidae are commonly called “chiggers.” Chiggers in their larval stage can bite humans, causing itching and skin irritation. Nymphal and adult chiggers do not bite humans, feeding instead on plant matter. 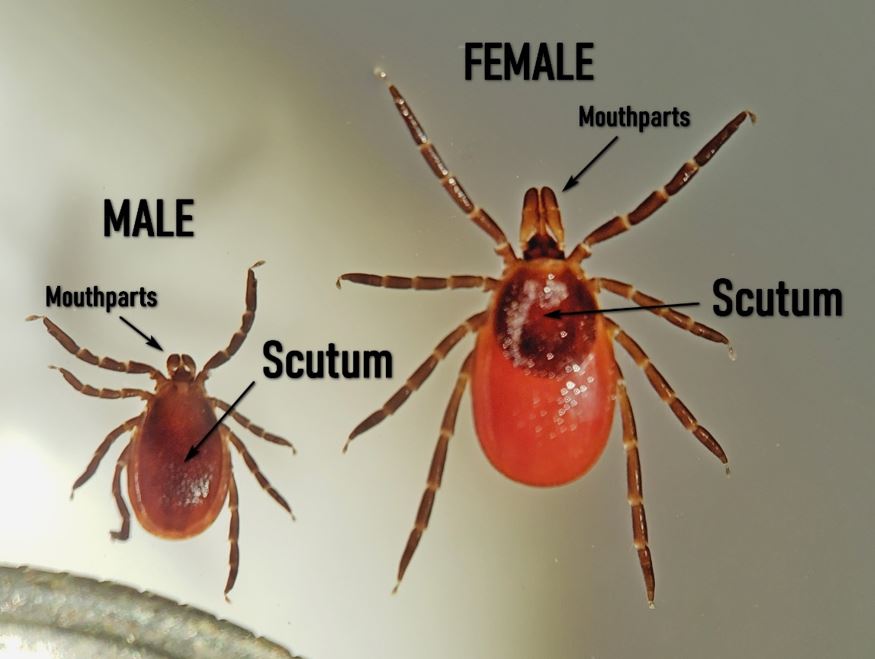