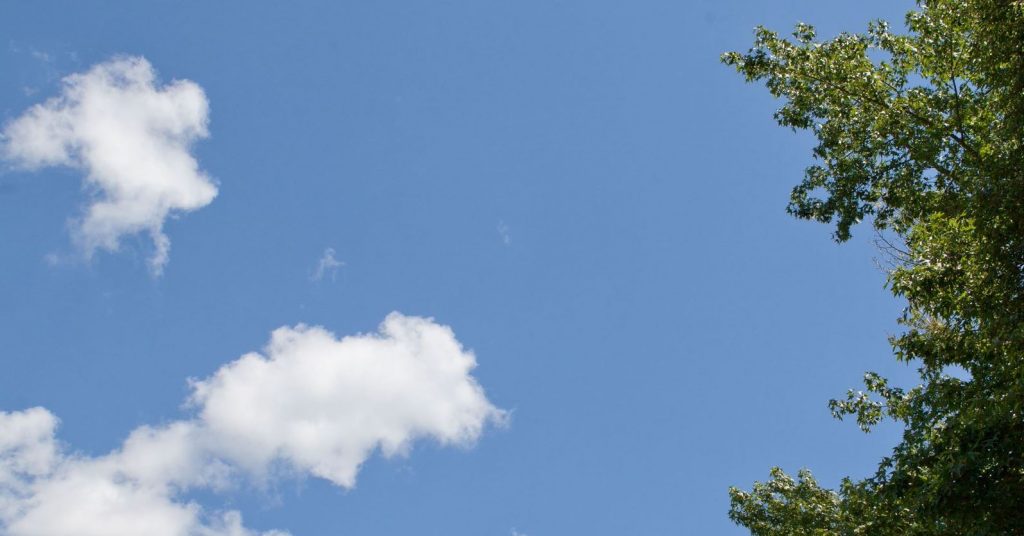 Along with warmer weather comes ozone season in Delaware, and the U.S. Environmental Protection Agency (EPA) and its partner agencies host an Air Quality Awareness Week during the first week of May.

Interest in air quality has been increasing since at least the turn of the 20th century. If you’ve ever watched Netflix’s “The Crown,” episode four centers on England’s London Smog event of 1952 which was a deadly example that kicked off the creation of laws to improve air quality. In the U.S., as noted in the show, the 1948 toxic smog event in Donora, Pennsylvania also turned lethal.

Public advocacy in the wake of events like Donora and London led to the passage of the Clean Air Act (CAA) of 1963 and major changes to it in 1970. Learn More

As a result, air pollution monitoring in Delaware began in the 1950s. In 1970, the same year the EPA was established, Governor Russell Peterson created the Delaware Department of Natural Resources and Environmental Control which consolidated previous monitoring efforts under its umbrella.

Ozone in the 21st Century

It goes without saying why our air quality is important, but what role does ozone play in the equation? Ozone is a colorless, naturally-occurring gas found in two layers of the atmosphere. In the upper layers, ozone protects life on Earth by absorbing some of the sun’s ultraviolet rays. 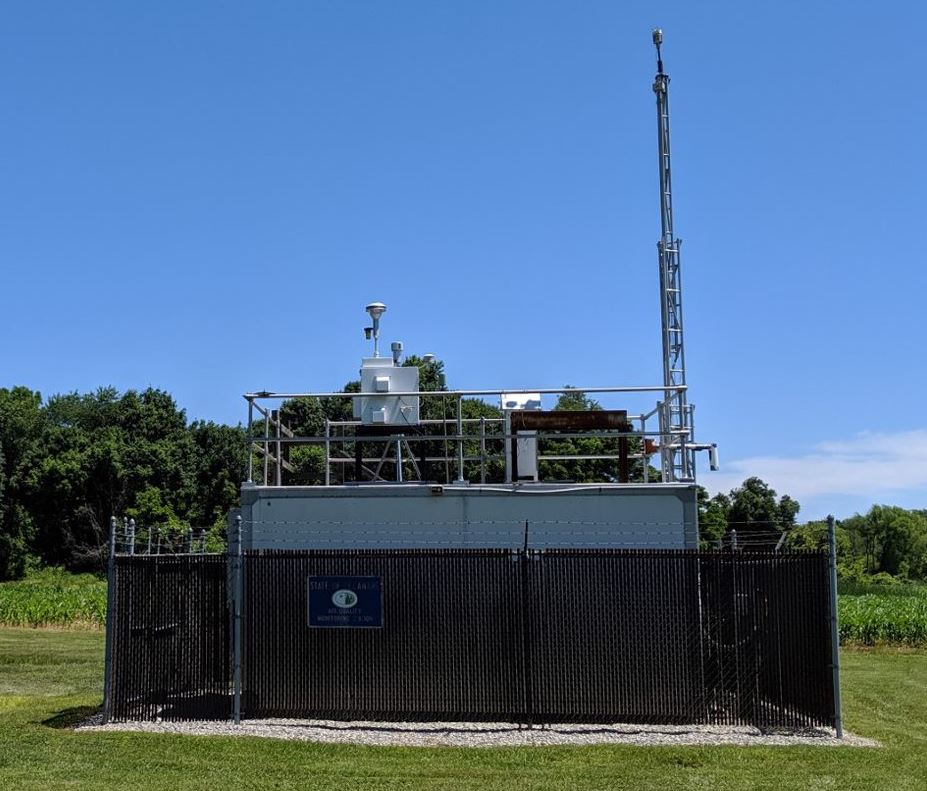 But in the layer closest to the ground, ozone is an air pollutant that is a key ingredient of smog and damages lung tissue, aggravates respiratory conditions and makes people more susceptible to respiratory infections. Children are especially vulnerable to ozone’s harmful effects.

For this reason – and to monitor other pollutants in the air we breathe – DNREC maintains an air monitoring network, made up of 11 permanent sites throughout the state.

The monitoring stations are climate-controlled trailers or shelters that house and protect the analytical instruments which staff from the DNREC Division of Air Quality maintain and operate. Computers allow for continuous monitoring 24/7, and help improve both the quantity and quality of data. The network is evaluated annually to address changing monitoring rules, improvements in technology and trends in air quality. 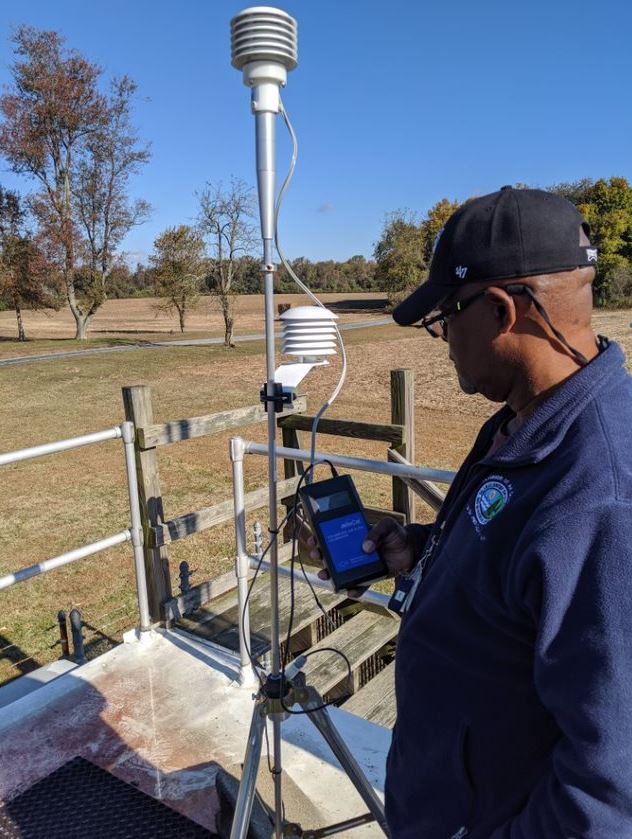 In addition to monitoring ozone levels, the stations measure other pollutants identified by the EPA. The EPA has standards for six major pollutants including carbon monoxide, sulfur dioxide, nitrogen dioxide, small and large particulate matter, and lead.

Delaware monitors for these and other pollutants and releases an annual report tracking changes.

New Castle County has the most monitoring stations – seven. That’s mainly because it has the largest population and number of pollution sources.

In addition, three sites have been added in areas with fewer sources of pollution to establish background levels and help measure pollution that is transported from outside of Delaware.

Not all pollutants are monitored at every site. What is monitored depends on nearby pollution sources and monitoring objectives. Ozone is the most common pollutant measured, followed by fine inhalable particulates and sulfur dioxide. 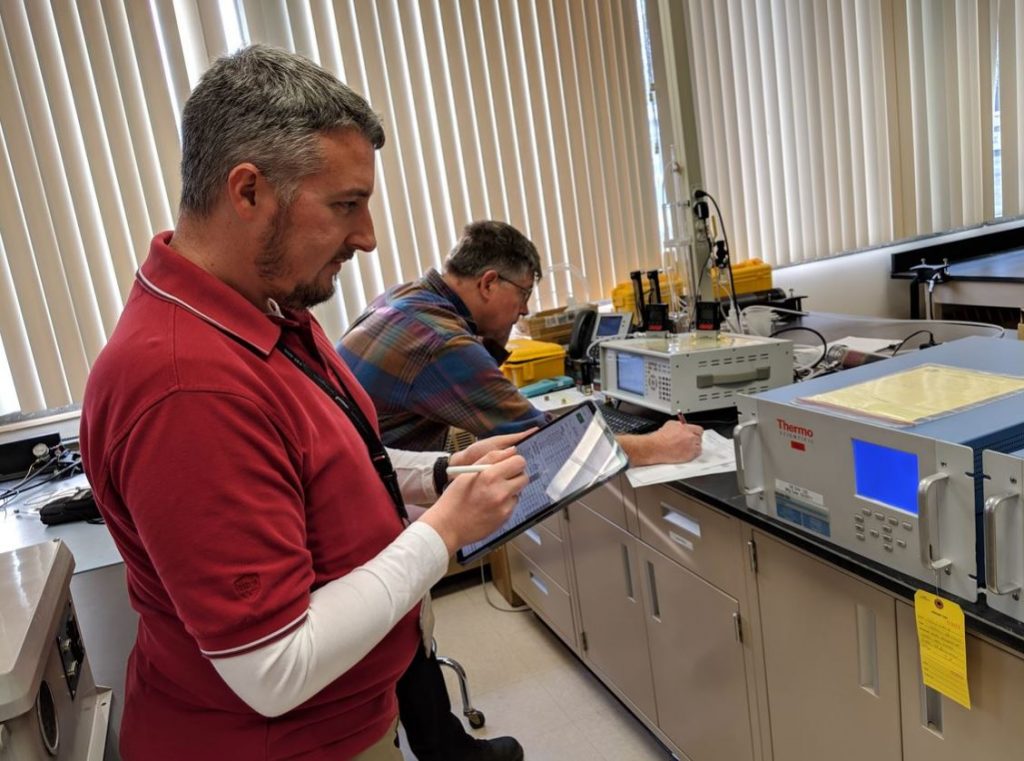 Our National Core (NCore) site in Wilmington monitors every major pollutant and many additional ones. The NCore site is part of a national network that integrates several advanced measurement systems for pollution monitoring and meteorology. The purpose of the NCore network is to enhance monitoring to better track changes over time as pollution controls are implemented and to support future monitoring needs.

As an urban site, NCore often records the highest levels of air pollution in the state. Hourly monitoring data is available on the DNREC website and through the EPA’s AirNow.gov for ozone and particulates. You can also sign up to receive air quality alerts or ozone forecasts in the summer season.

The various control measures put in place by federal and state governments since the 1970s have resulted in major improvements in air quality, particularly regarding major industrial sources. Pollutants of concern today come from many sources including large and small industrial facilities, mobile sources and businesses.

Monitoring technology is improving with remote sensing from satellites and more portable monitors that are robust and accurate. So monitoring networks will evolve further. Delaware has conducted special studies to address local concerns and to test new monitors and the network. We will continue to use our monitoring network to track changes in air quality across the state and evaluate whether our air quality meets outdoor air quality standards.

Keith Hoffman is an environmental scientist, data analyst and EPA-designated Quality Assurance Coordinator with the DNREC Division of Air Quality.

Public advocacy in the wake of events like Donora and London, along with data from monitoring efforts like Delaware’s, eventually led to the passage of the Clean Air Act (CAA) of 1963 and major changes to it in 1970.

An important piece of the 1970 Clean Air Act created standards for air pollution which set goals for pollution reduction to maximize the protection of public health and the environment. Monitoring is essential to know when those goals are achieved.

Over the years, with advances in science and health studies, these standards are reviewed. The goals are adjusted and major pollutants are targeted.