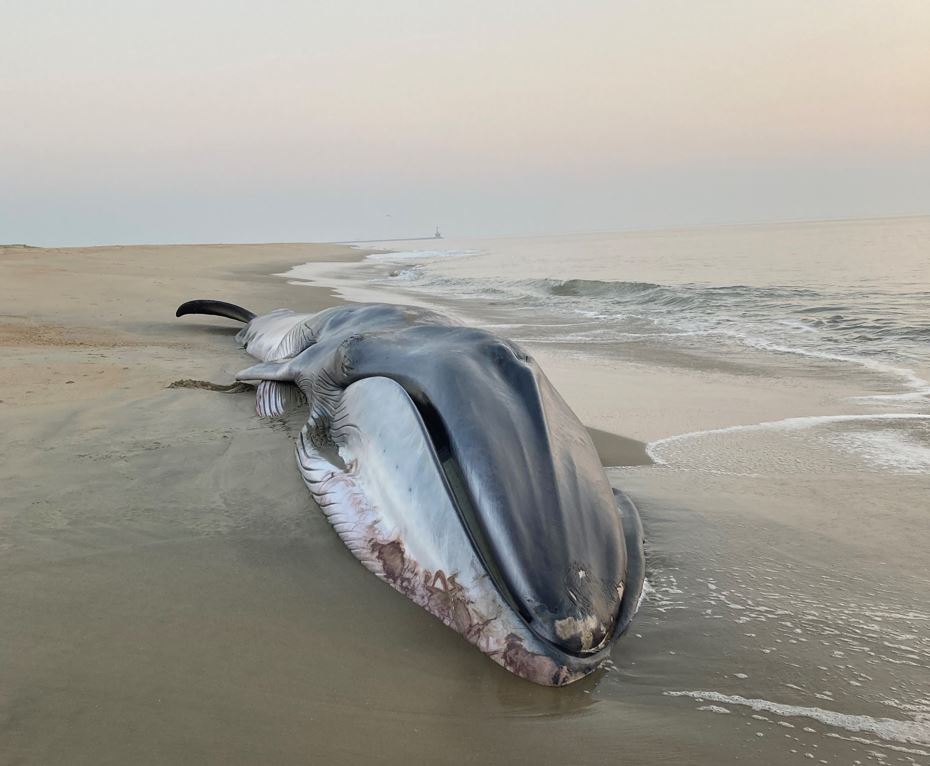 In August, a 57-foot-long fin whale was struggling near the beach in Cape Henlopen State Park. Calls went out to the Delaware Natural Resources Police (DNRP) and to MERR, the Marine Education Research and Rehabilitation Institute in Lewes. The calls typically go out when a marine mammal is in trouble in Delaware’s waters.

While the DNRP set up a perimeter around the animal to keep curious boaters and other onlookers away, MERR sent its responders in to provide aid. Unfortunately, the whale died on its own the following morning. MERR performed a necropsy, or animal autopsy, determining that it suffered from significant parasitic infections in numerous organs. The whale was buried on the nearby beach after a trench was dug by the DNREC Shoreline and Waterway Management section with heavy machinery.

DNREC and MERR are partners when marine animals strand or beach themselves, working together to help not just whales, but far more frequently seals, sea turtles, dolphins and other marine animals in danger. It’s part of the mission of both agencies.

Why Do Marine Animals Strand?

Stranded animals are usually in a debilitated state due to:

The Most Common Calls

MERR responded to 202 strandings in Delaware in 2020, which is lower than the more typical number of 250 to 300. The lower number may have been due in part to the beach closures in Sussex County during the height of the pandemic, when some strandings were not observed and therefore not reported. MERR has responded to 216 strandings so far this year.

By far, most of MERRs’ calls are about seals. MERRs’ team responds to as many as 175 seal calls per season – from November through April – because seals naturally haul out of the water onto the beach and other land areas to rest, but are not necessarily stranded. MERR responds to every single report, however, so that the seal can be assessed and monitored while it is on the beach. This response allows MERR to note any changes in its condition, It also helps MERR responders and volunteers to educate the public about keeping a safe distance from the seal and keeping dogs on a leash. The goal is to allow the seal to be undisturbed so that it can get the rest it needs. MERR is also able to educate members of the public about seals in Delaware and how to be a good wildlife steward.

Seals are protected species under the Marine Mammal Protection Act, the federal law that protects seals and other marine mammals from harm and harassment, and people need to keep a minimum distance of 150 feet from a resting seal to comply with the law. MERR maintains a live presence at seal haul-out areas because there is such a prevalence of human and seal overlap areas along Delaware beaches, even in the winter months. Signs don’t suffice, so MERR trains its volunteers to help watch over resting seals.

From Call to Action

When a call comes in, MERR first sends out an alert to responders to get someone on scene as soon as possible. That person will then provide additional information such as photos and a description of the animal and the scene, so that MERR can determine if it is safe for responders.

If the animal is alive, MERR will start readying its rescue and veterinary equipment at the Lewes facility. MERR immediately apprises the National Oceanic and Atmospheric Administration (NOAA) of the stranding, particularly in the case of an endangered species. NOAA and the U.S. Fish and Wildlife Service (USFWS) enforce the Marine Mammal Protection Act passed by Congress in 1972. MERR also sends a notification to the Delaware Natural Resources Police, part of the Department of Natural Resources and Environmental Control, so the units are aware of the stranding in case they receive reports or inquiries. Finally, MERR notifies the land managers, such as the DNREC Division of Parks and Recreation, and MERR veterinarian, Dr. Dee Holm.

Sometimes, the public calls the Delaware Natural Resources Police first to report sick, injured or dead marine animals. In this case, an officer will arrive on scene to determine as best they can whether the animal is alive. The officer will, either way, contact MERR to relay what they are seeing, exactly where the animal is, whether it should be moved and any other details MERR might need.

DNRP will set up a perimeter of between 50 and 100 yards in the water and/or land to keep the animal and the public safe, depending on the location of the stranding, size of the beach and other factors. They will also provide crowd control if needed. Federal law requires the public to stay 500 yards away from North Atlantic right whales, 100 to 600 feet from other whales, and 150 feet from seals, dolphins and sea turtles. Since MERR doesn’t have its own boat because water rescues are so rare, DNRP is always at the ready to take MERR responders to the scene by boat, providing an indispensable component of the response. While enforcement issues are rare in the case of strandings, DNRP handle those as well, helping protect the welfare of the animal, the MERR team and the public.

Once MERR is on the scene, responders identify and assess the animal and document and collect data. Blood work may be done to determine if the animal is strong enough to endure the stress of rescue and treatment. The size and weight of the animal also dictates MERR’s ability to rescue it and provide triage services. Seals, small dolphins and sea turtles are of a manageable size, but a multi-ton whale is not. In those cases, or when an animal is in the process of dying and beyond MERR’s help, responders will provide palliative care and possibly euthanasia. 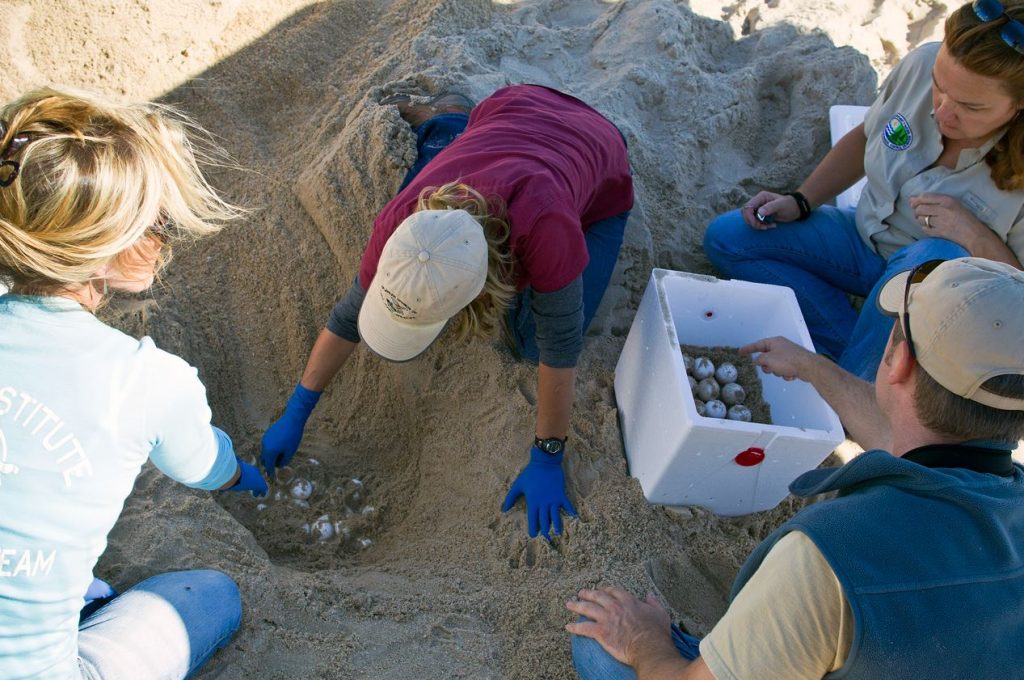 If rescued, the animal will be taken back to the MERR facility where additional assessment and diagnostics are performed, along with veterinary treatment and stabilization through hydration and nutritional therapy. MERR is able to care for the animal for a couple days to one week. From there, the animal is transported to a long-term rehabilitation center for the remainder of its recovery and will hopefully be released back to the ocean after it is rehabilitated. One issue is that there are a limited number of rehab centers in the region.

If the animal is dead, the initial protocol is the same as that for a live animal. If it is a non-endangered species, MERR will collect data, photo documentation, life history and possibly perform a necropsy. In the case of an endangered species, like the fin whale that died, the process is more involved. NOAA is notified immediately and continually updated in many steps of the response, and they may assign a necropsy team leader from another organization that has a high level of expertise with that species.

If it is a smaller animal (less than 1,000 pounds), MERR may take the carcass back to its lab. In the case of larger animals, a necropsy in the field may be performed. Samples will be collected for genetics, different pathologies, parasites, toxins, heavy metals and more. Sometimes the cause of death can be determined by the gross necropsy observations, which provides a fairly quick determination. Samples are collected and processed at MERR, but all samples are sent out to pathology labs. It takes time for certain samples to cure, and from there samples will be processed at the lab in the order in which they are received, so there can be a waiting process. Samples will be sent to the lab that correspond with suspect diagnosis, so certain labs specialize in specific diagnoses, and sometimes the lab we send to is dictated by NOAA. 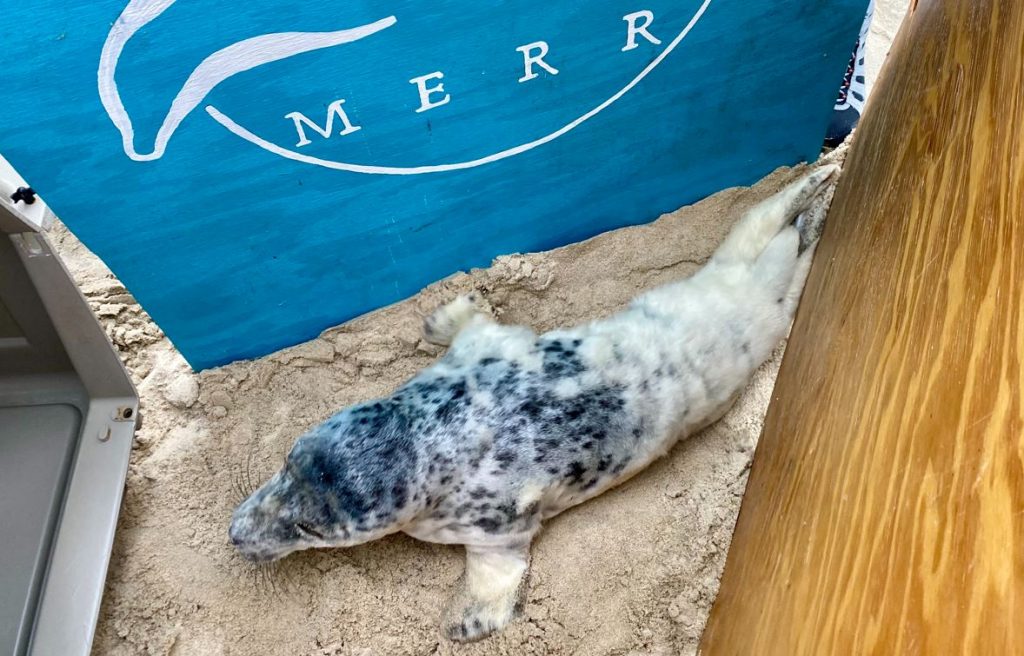 MERR has had many success stories with seals. Five of its rescues were treated and released this year, including Eloise – a three-week-old dependent pup that somehow got washed away from her seal colony and mother, and ended up on the beach by the Great Dune. She was too little to swim back out, and an impending storm surge would have washed her out to sea where she would have drowned. Luckily, MERR rescued and cared for her, after which she went to the National Aquarium in Baltimore for the remainder of her treatment.

“Rocky,” the Risso’s dolphin, is probably the rescue that is most memorable. He was a young male dolphin that stranded near the Navy jetty near Herring Point in Cape Henlopen State Park on a hot Saturday in July. He was underweight, and since he is a deep-water species, should not have been near shore. MERR was able to rescue him and outfit a large truck with a generator and air conditioner for his long ride. The closest facility that was capable of rehabilitating dolphins was on Long Island, N.Y., so MERR had to provide life support, including temperature control, intravenous fluids, and a truck big enough to accommodate a 10-foot dolphin and the support stretcher he was in.

Happily, after nine months of care at the Riverhead Foundation, Rocky had made a full recovery and was released off Port Jefferson, N.Y. He was the first Risso’s dolphin ever to be successfully rehabilitated and released, which paved the way for others to be successfully treated and released. Rocky had been equipped with a satellite tracking device upon his release, and after a few adventures he came back to the Delaware area and stayed for quite a while. We all like to hope he was able to locate his family and is living a good life.

The Hardest Part of a Rescue

It’s always difficult if an animal doesn’t make it. That takes an emotional toll on the rescuers. In addition, the sheer weight of these animals makes rescue difficult. Exposure to the elements such as extreme cold or heat are also difficult for the rescue team.

What happens to the animals when they die?

When an animal dies or is already dead, MERR may conduct a necropsy. This step tends to be taken when the animal is fairly fresh so that samples are viable. Deceased animals and those that are necropsied are buried on the beach when possible so that they become part of the beach ecosystem and nourishment for organisms living in the sand. Carcasses that are taken back to the MERR lab will be composted after a necropsy. To ensure public safety, carcasses on the beach are buried by state parks maintenance staff using heavy equipment. Or, as in the case of the fin whale that stranded in summer 2021, if the carcass is extremely heavy, large equipment is required and is provided by the DNREC Shoreline and Waterways Management section.