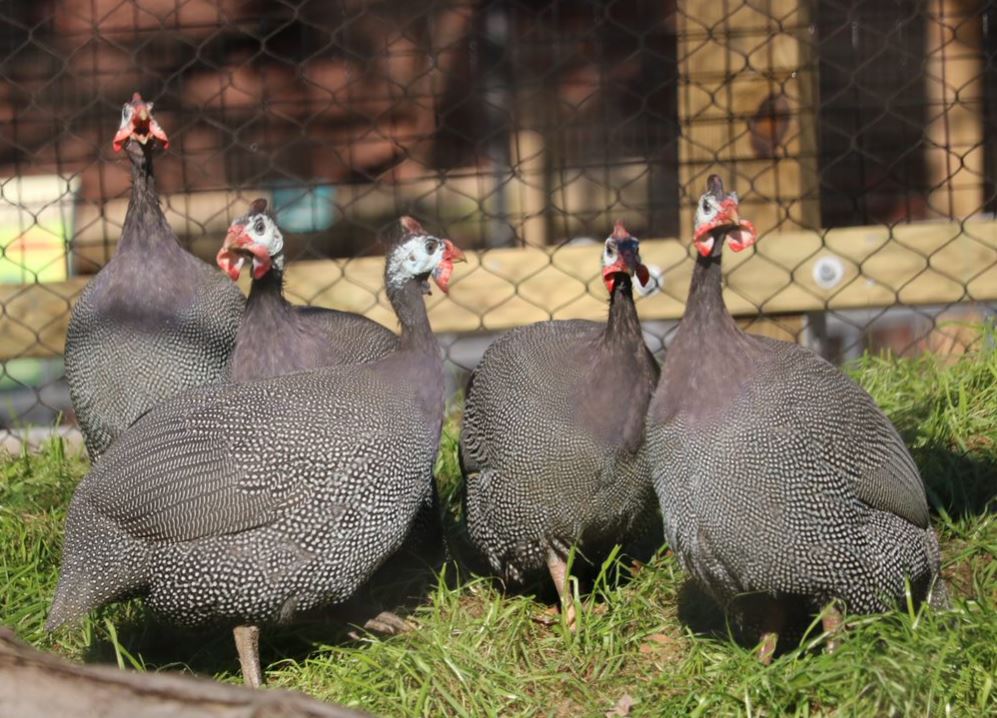 Four helmeted guinea fowl graze the grass of their new home, seemingly unaware of passersby. That is, until the door to the holding area opens. Their heads snap toward it in anticipation. It’s time for their cohabitants, the lemurs, to sunbathe. Well, some of them anyway.

A.J., a male black and white ruffed lemur, walks to the center of the Brandywine Zoo’s new Madagascar exhibit space, stands on his back paws, raises his front arms and looks up toward the sun.

That’s the pose. It’s a common behavior from the sun-loving species native to the island country off the coast of East Africa who now inhabits the zoo’s newest habitat.

Inside the exhibit’s holding area, a pair of crowned lemurs, along with four ring-tailed lemurs, navigate a series of fire hoses and branches hung like party streamers, topped off with mini swings.

Mixed-species exhibits are part of the Brandywine Zoo’s new master plan and the lemurs, guinea fowl and radiated tortoises who live in the Madagascar habitat will have rich social lives together. Three radiated tortoises, also an endangered species, round out the habitat, but it’s the lemurs who steal the show. 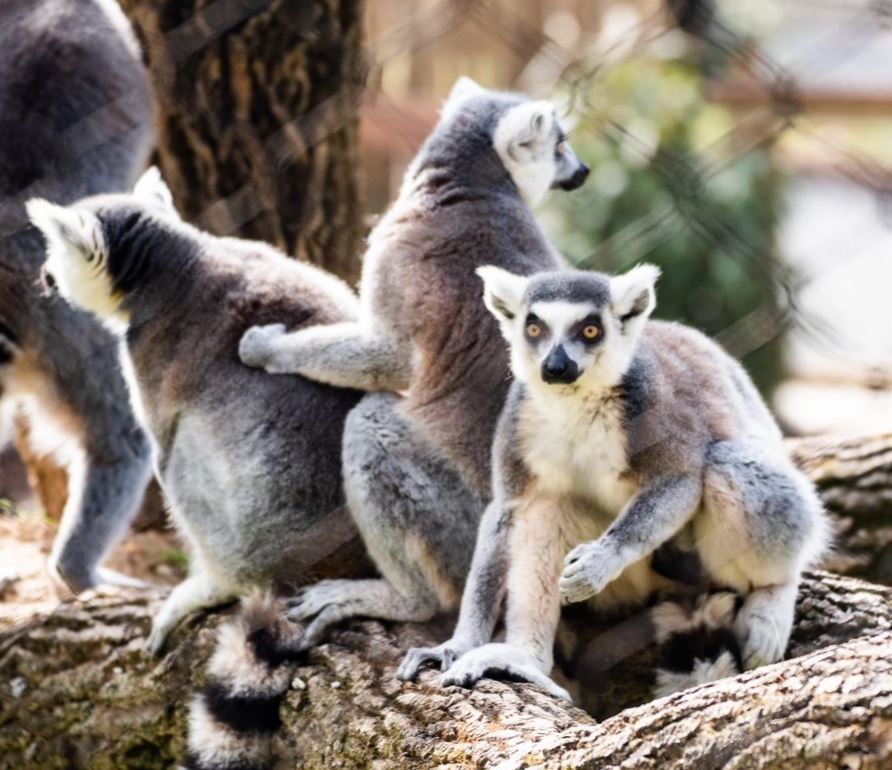 According to Mandy Fischer, who was integral in planning the exhibit and served as assistant curator, each lemur species has a similar, yet different “locomotion.”

Ring-tailed lemurs travel in groups, and like to run on the ground and jump into branches to browse the leaves. Ruffed lemurs, who are very loud when vocal, often hang upside down by their back feet to reach the best fruits and leaves. Crowned lemurs are prone to grooming and are very vocal. They are paired for breeding in the hopes that the zoo will welcome a lemur baby soon.

“It has been a priority to grow a healthy crowned lemur population in human care while the fate of their wild counterparts remains grim,” Fischer says. “With only 30 individual crowned lemurs within all of North America, every infant that will be born to the couple is critically important to the survival of the species as a whole.” 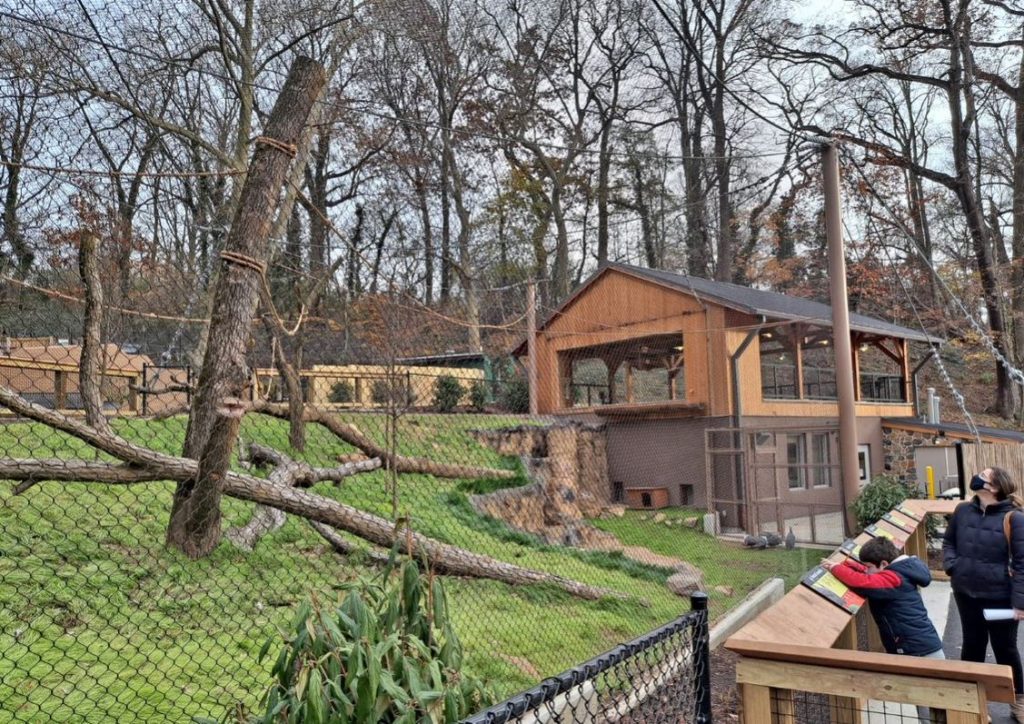 Fischer, who holds a special interest and background in lemurs, says the goal was to create a dynamic and beautiful habitat that will bring the story of Madagascar to Delaware.

According to the International Union for Conservation of Nature (IUCN), 95% of the 112 lemur species are threatened or endangered, making them the most endangered group of mammals on the planet.

“Madagascar is a biodiversity hotspot that has great importance to animals and humans,” Fischer says. “The wildlife is disappearing at an alarming rate and we feel it has an important story to tell. We can also draw connections of deforestation, climate change and water quality back here to Delaware as we are affected by these same things.”

How humans can help

Fischer says we use Madagascar’s dwindling resources to power our cell phones, and for medicines, hardwoods and other products from its forests. 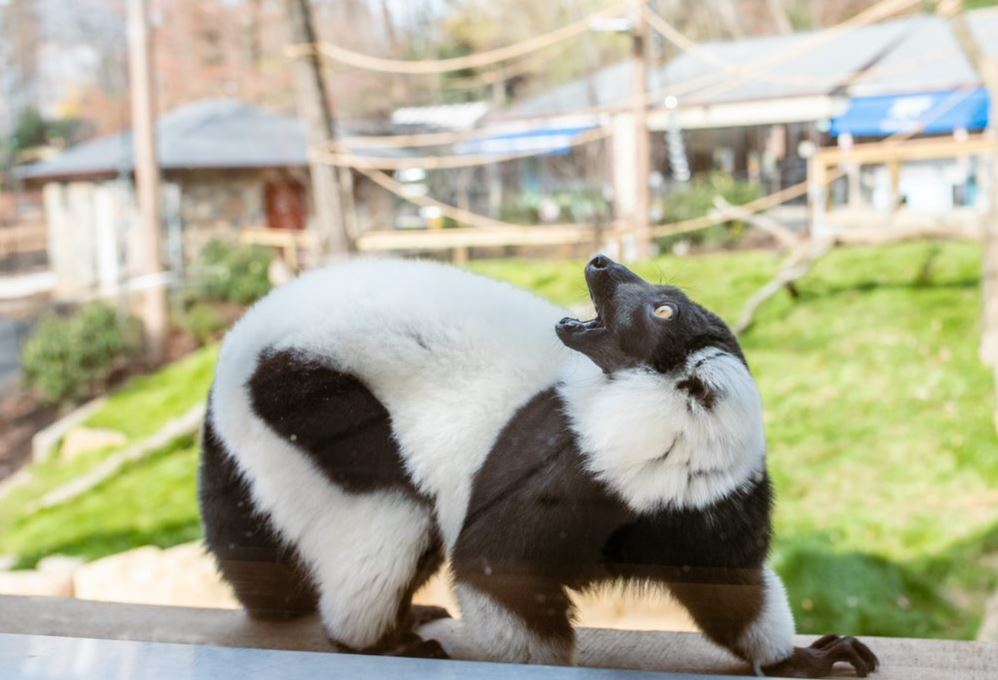 In Madagascar, deforestation is also a local issue; to provide fuel for cooking. However, other issues have a global reach, like the illegal collecting of lemurs and radiated tortoises for the pet and meat trade, or deforestation for vanilla production.

Wayside boards along the new exhibit’s edge explain the dire conditions for Madagascar wildlife and how humans can help, including making environmentally conscious purchases by choosing sustainably produced products.

Almost every conservation issue has a human cause. We hope the Madagascar exhibit teaches our visitors how they, too, can help protect these rare species of animals in the wild.

To see the lemurs for yourself, go to branydwinezoo.org and reserve your spot and ticket.

Brint Spencer is the director of the Brandywine Zoo, managed by the DNREC Division of Parks and Recreation with the support of the Delaware Zoological Society.