You probably don’t think of squirrels as rare; you see them all over the place. Darting back and forth across the road, nabbing acorns, stealing bird seed and jumping from tree to tree.

But for all those squirrels and all those antics, you have probably never seen a Delmarva fox squirrel in Delaware. That’s because they are rare here and only occur in a couple locations in the southern part of the state.

Delmarva fox squirrels have silver-gray coats, short rounded ears and long, fluffy tails (longer and fluffier than the more common eastern gray squirrel). They can weigh up to three pounds and grow up to 30 inches long, including their bushy tail, which can reach 15 inches. They are one of the 10 recognized subspecies of fox squirrels – the largest tree squirrels in North America – and this subspecies only occurs on the Delmarva Peninsula. 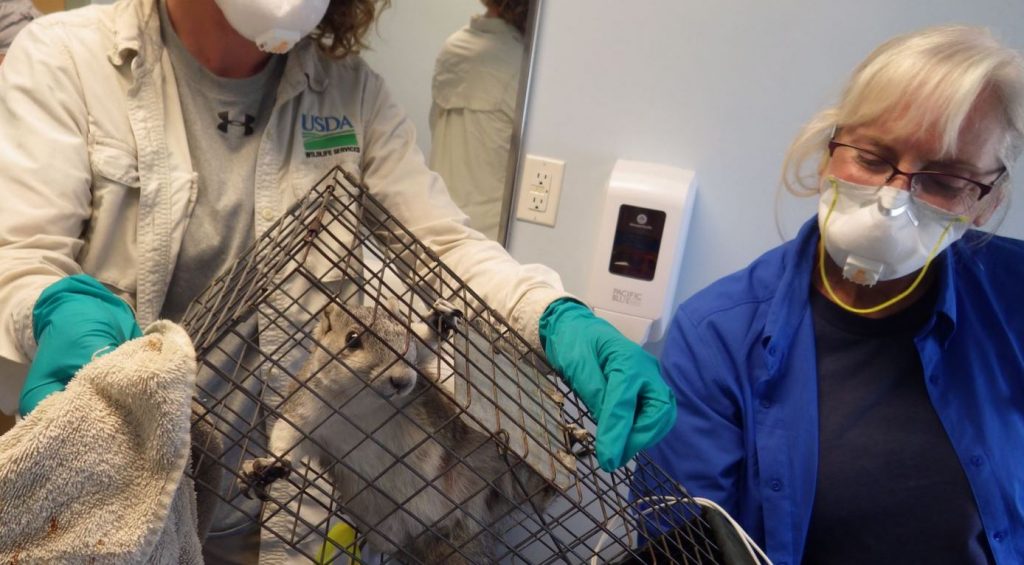 But just because you haven’t seen one yet doesn’t mean you won’t in the future, especially if you live in Sussex County. The Delaware Department of Natural Resources and Environmental Control (DNREC) and its state and federal partners are bringing more Delmarva fox squirrels into the state. The DNREC Division of Fish and Wildlife translocated 15 squirrels in September and another 15 in May to Assawoman Wildlife Area. More translocations are planned in the next couple years.

All the squirrels came from robust populations on private and public lands in Dorchester County, Maryland. Great care was taken to make their transition to the First State as smooth as possible. 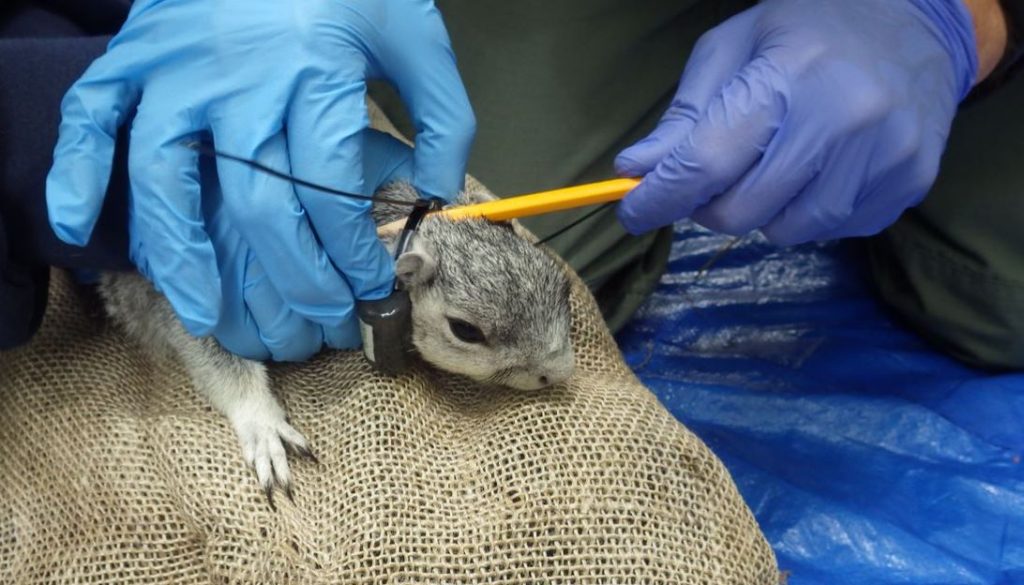 The charismatic Delmarva fox squirrel was once a federally-listed endangered species, but translocations like these, habitat management and land protection have helped regional populations to recover, resulting in the species being removed from the federal endangered species list in 2015.

Delmarva fox squirrels are now abundant on Maryland’s Eastern Shore. But they remain rare in Delaware, with only two known populations before the translocations. Unlike its relatives, the Delmarva fox squirrel is very slow to expand its range and colonize new territories.

In 2014, the Division developed a Delmarva Fox Squirrel Conservation Plan in collaboration with stakeholders to increase the number of Delmarva fox squirrels in Delaware. Translocations are the backbone of the plan but habitat management will also play a role.

How Are Our New Residents Doing?

Our research on the first 15 released last fall shows that they’re holding their own. As is fairly common, some of the new recruits managed to get out of the collars we put on them to study their movements. Some of the collars broke, and some slipped over the squirrels’ heads. Unfortunately, at least five are presumed dead, but this level of mortality is normal and expected. Resident as well as translocated squirrels are on the dinner menu for many predatory species. 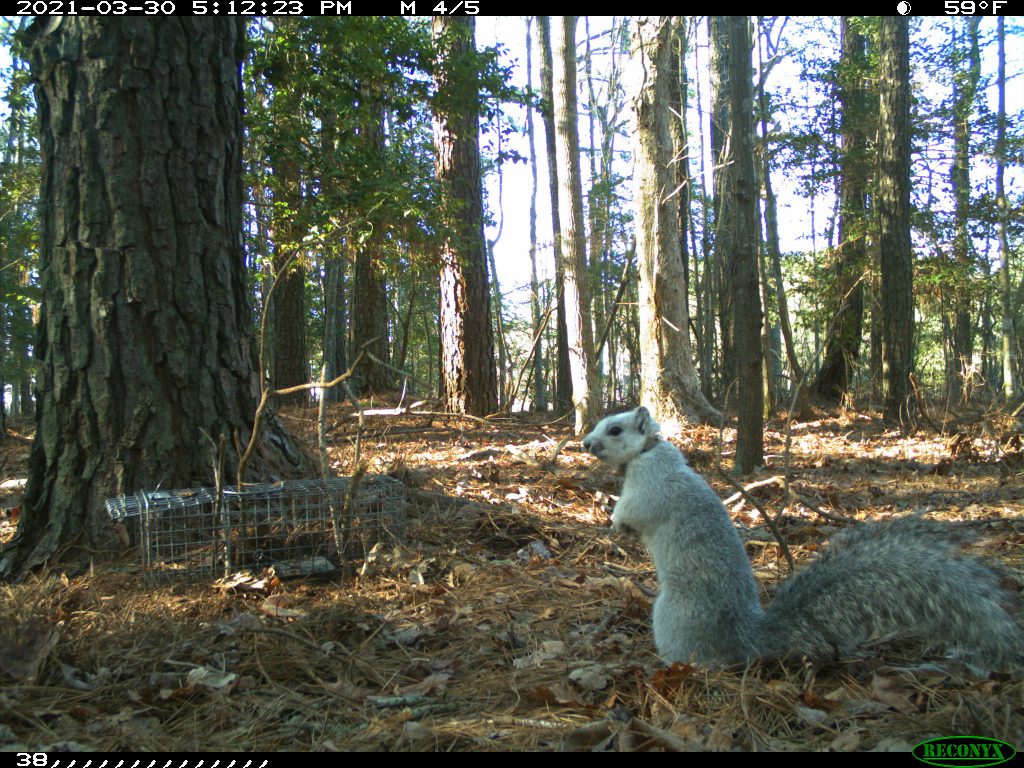 We have also captured some squirrels without collars on camera, so we know that some of those who slipped or broke their collars in the fall are alive and well – and still in the wildlife area.

All 15 of the May group have retained their collars and seem to be doing well. Only two have left the wildlife area and nearby woodlands. They have not gone far and we hope they will both come back to the release site so they can find females this summer or fall. Although we want them to disperse throughout the county, it would be better for them to stay close long enough to mate and make more Delmarva fox squirrels.

Long term success will be measured four to ten years from now, when Delmarva fox squirrels are documented continuing to breed and the survival of new unmarked adults can be confirmed. We will study that with a combination of trapping and photo monitoring. Reproduction is documented either by capturing lactating (milk-producing) females or young.

Have you Seen One? Let us know!

Report your sightings. And get answers to frequently asked questions or call 302-735-3600.

Keeping Track of the Newbies

The Delmarva fox squirrels captured for translocation were fitted with radio collars – attached with special zip ties designed to lie flat when fastened. A pencil is used as a spacer to make sure the zip tie is not too tight around the squirrel’s neck.

We manually track the squirrels with specialized receivers. Once squirrels are detected, we use a program called Survey123 to enter the data from our phones, which automatically saves into spreadsheet and GIS formats, allowing us to monitor their movements using a sophisticated mapping system. 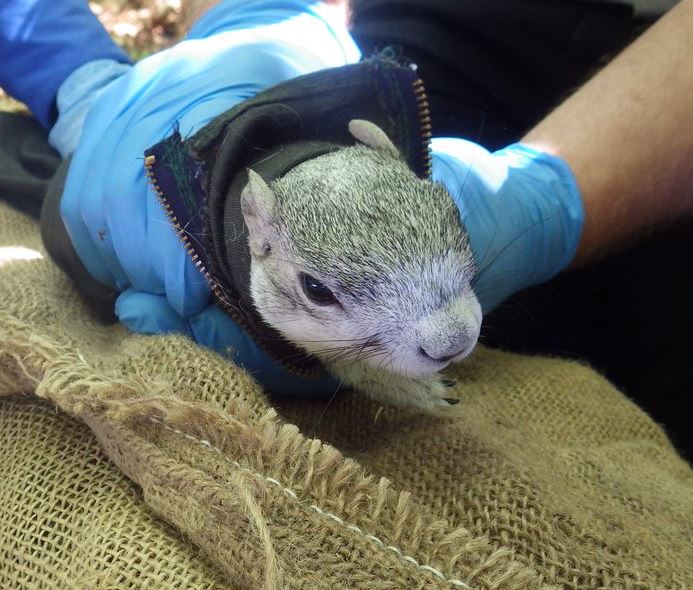 What’s Ahead for the Program?

We plan to introduce new Delmarva fox squirrels into three different locations in Sussex County by 2024.

Translocations have proven to be an important and effective tool for increasing the distribution of the squirrels and are the cornerstone of the Delmarva Fox Squirrel Conservation Plan.

Since they are no longer a federally-listed endangered species, landowners should not be concerned if they start seeing Delmarva fox squirrels on their property.

Hunting of Delmarva fox squirrels is prohibited, so it is important that hunters note the differences between them and our more commonly seen eastern gray squirrels.

Holly Niederriter is a wildlife biologist with the DNREC Division of Fish and Wildlife.