By Henrietta Bellman and Christina Whiteman 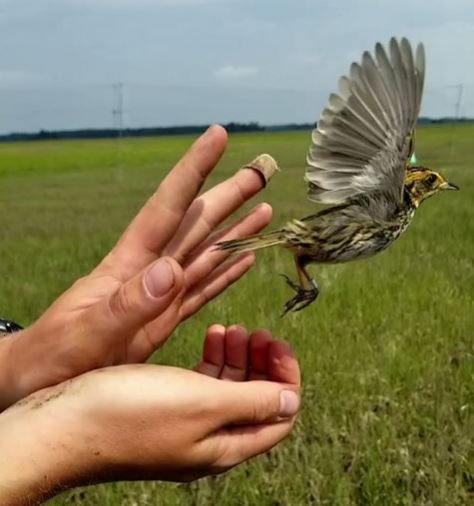 Marsh birds can be hard to detect and they exhibit secretive behaviors quietly – like hiding in marsh grasses or creeping along creek edges. In fact, the majority of studies of rely on sound alone since these birds, including clapper rails and saltmarsh sparrows, are so difficult to see. Given their secretive nature, it can be easy to overlook them. And marsh birds are vulnerable to slight changes in tidal salt marsh habitats which face threats such as sea-level rise, changing weather patterns and saltwater inundation.

Within the Delaware Department of Natural Resources and Environmental Control, scientists are working to find out how the various species of marsh birds are faring in the First State. The Delaware National Estuarine Research Reserve (DNERR), part of the DNREC Division of Climate, Coastal and Energy, and the Division of Fish and Wildlife collaborate with the University of Delaware (UD) to conduct annual surveys from May to July. The purpose of this work is to learn about long-term trends, estimate distribution of marsh birds and document habitat conditions that influence abundance and species diversity.

Staff at the DNERR St. Jones Reserve have been conducting marsh bird surveys since 2012. In 2017, the Division of Fish and Wildlife identified the need for increased monitoring of saltmarsh species throughout the state and approached Dr. Greg Shriver at UD to establish a research partnership. Dr. Shriver and his team have conducted tidal marsh bird surveys in Delaware since 2011 and throughout the Atlantic flyway, so the partnership has been a natural fit. The division has been funding UD to conduct avian surveys across tidal marshes and impoundments in Delaware since 2018.

Marsh bird species of particular interest are saltmarsh and seaside sparrows, willet, the American and least bittern, sora, the clapper rail, Virginia and king rail, and the black rail, which is a state-listed endangered and federally-listed threatened species. 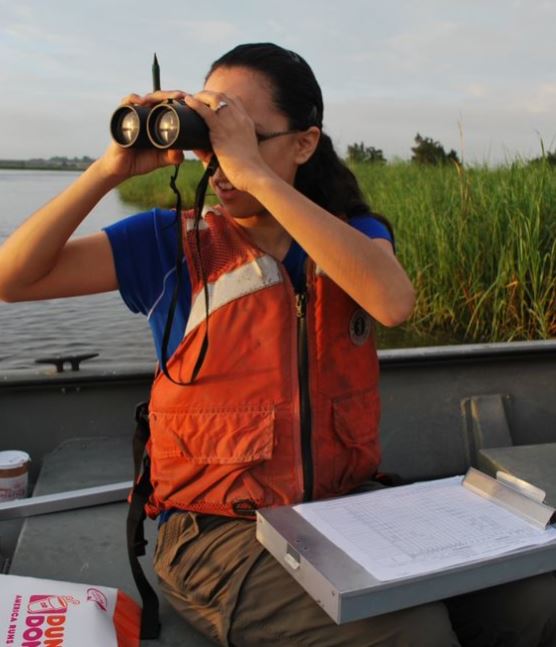 DNERR and UD follow the Saltmarsh Habitat and Avian Research Protocol (SHARP) to collect data and improve our understanding of the birds’ ecology and population demographics in the state. Researchers use a combination of passive (listening) and playback (playing audio bird calls) methods to record bird species within a fixed distance of a sample point. Each point is visited numerous times during the breeding season, and one additional time to survey the plant communities at that location. Survey sites range across the state from Woodland Beach to Rehoboth Bay.

Once they identify breeding clapper rail adults, they locate and monitor nests and chicks until the chicks can fly. They trap and attach a small metal leg band to adults and chicks and fit some individuals with tracking devices that allow us to monitor the birds’ movements in Delaware and during migration.

Since 2011, our marsh bird populations overall have remained relatively stable statewide. During 2019 to 2020, UD monitored 113 clapper rail nests, and fitted 27 adult and 15 fledgling – birds which hatched that season – with tracking devices. These tracking devices have provided information about migration routes to southern states during the non-breeding season. The data is still being analyzed to establish trends. 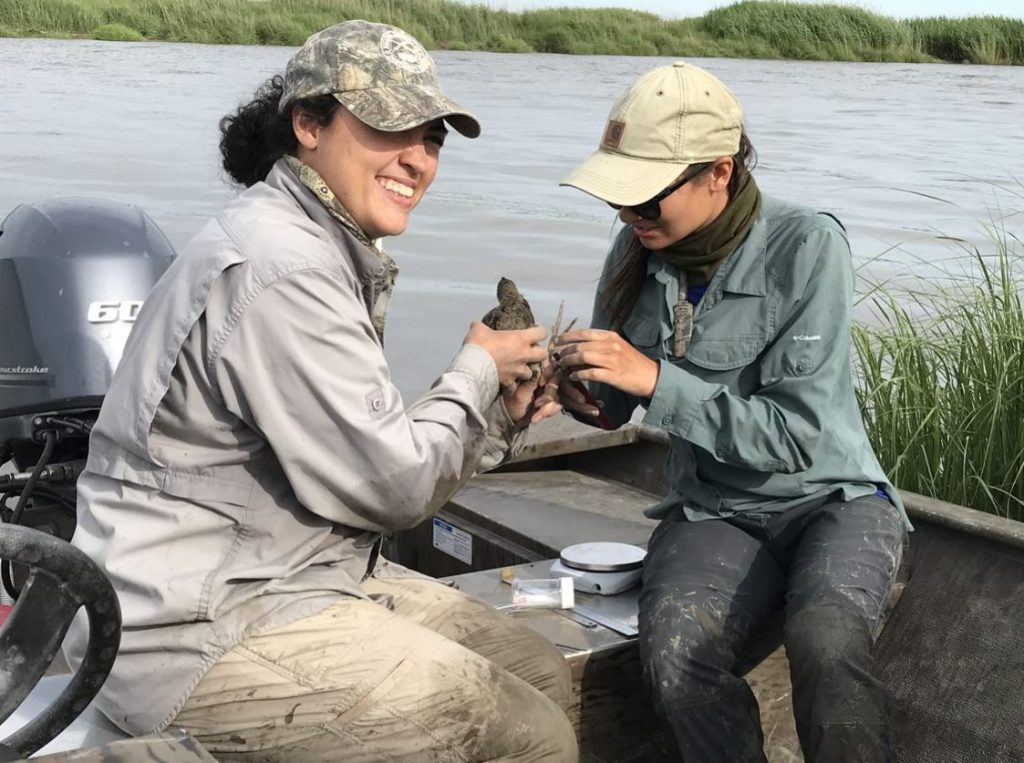 Species diversity appears to vary among different sites. For example, UD has recorded more saltmarsh sparrows at Prime Hook National Wildlife Refuge in Sussex County than other survey locations. This may be due to the connected areas of suitable breeding habitat at this site. At the DNERR St. Jones River study site, seaside sparrows have been the most abundant species from 2013 to 2019. Over the study period, clapper rail and salt marsh sparrow numbers have declined at the St. Jones Reserve. The reasons are unclear, so annual data collection continues to be necessary.

The data we collect provides estimates of populations and trends for marsh bird species in Delaware. This helps inform species monitoring and land management plans by the Division of Fish and Wildlife.

DNREC works with other partners in addition to UD, including the Atlantic Coast Joint Venture which identified three focal species – saltmarsh sparrow, black rail, and American black duck – to monitor and manage. The data collected during our tidal marsh surveys and rail monitoring will contribute to this region-wide effort. 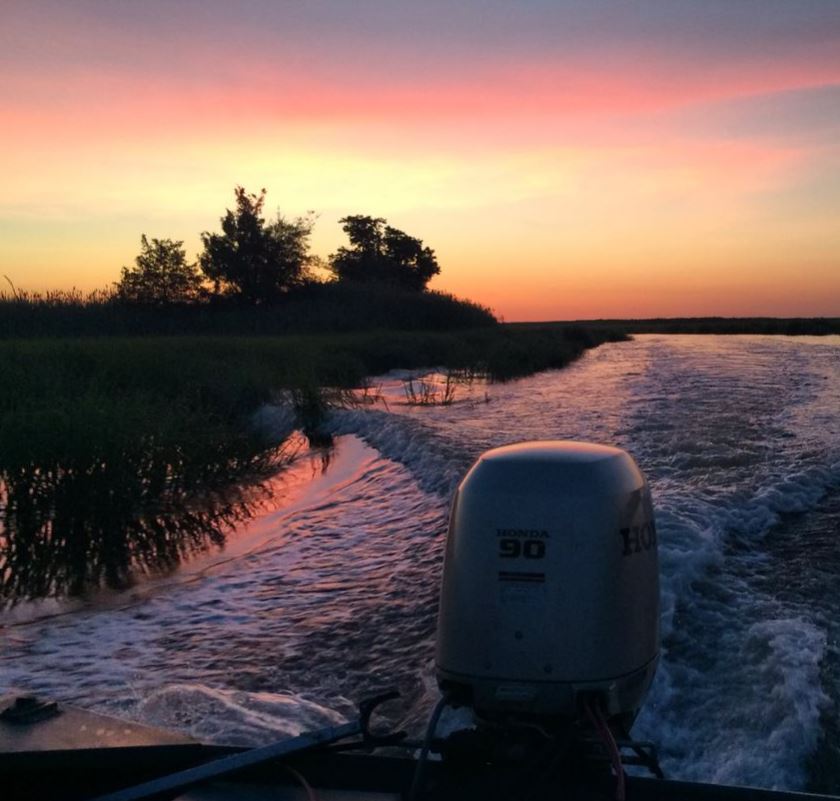 Since many of the surveys are completed via boat, seeing the sun rise on the water with the marsh in the background and wetland creatures awaken – including river otters – is a beautiful start to the day.

However, working in the saltmarsh is not an easy task! Surveys are done during the hottest part of the year and when insects are most abundant. But the early mornings and bug bites are worth it when we experience sightings of marsh birds such as saltmarsh sparrows at first light. This species has experienced dramatic declines across their range, so we recognize the privilege of seeing them in the saltmarsh and the need to continue to monitor them.

Both the Division of Fish and Wildlife and DNERR surveys are critical in determining the health of these important saltmarsh bird populations in Delaware. We study their secretive nature so we can help ensure that these species persevere.

Christina Whiteman is an Environmental Scientist for the DNREC Delaware Coastal Programs, and Stewardship Coordinator at the Delaware National Estuarine Research Reserve.