By Brint Spencer and Katlyn Muse 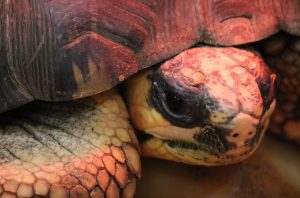 His name is Toliara and he lives at the Brandywine Zoo.

He’s what’s called a radiated tortoise. Why the unusual name? It has nothing to do with exposure to radiation. The name comes from the pattern on his shell, which radiates from the top like the spokes of a bicycle.

Radiated tortoises are reptiles and considered among the most beautiful in the world. His ancestors emerged on land shortly after dinosaurs became extinct some 65 million years ago.

Radiated tortoises can live 40 to 50 years in the wild. In captivity, they can live more than 50 years. Toliara is 26 years old and is covered in scales – watertight skin – and boney plates called scutes. His shell measures about 16 inches and he weighs about 16 pounds.

Is a Tortoise a Turtle?

While all tortoises are turtles, not all turtles are tortoises. Tortoises live exclusively on land and have thick elephant-like limbs. Turtles can live on land and in the water depending on the species, and typically have flippers or webbed feet. Although Toliara is a tortoise, you can sometimes see him sit in a large bowl of water. If you see him doing this, he is either drinking or soaking himself.

Many turtles are omnivores and can eat most anything, while tortoises are vegetarians. Toliara eats greens like kale, lettuce and grass. He also likes fruits including bananas, melons and oranges. And he eats vegetables such as squash, yams and carrots. One of his favorite foods is prickly pear. 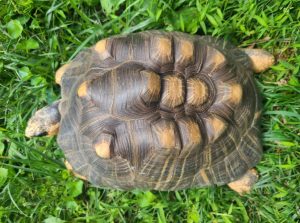 Toliara’s days at the Brandywine Zoo are spent basing in the sun, sleeping with his legs sprawled out behind him and eating the grass in his yard. While he doesn’t have teeth, he does have a sharp beak that can break skin. If a tortoise bites, it’s usually either an accident like mistaking your finger for food, or it feels threatened. When startled, Toliara will pull his head and legs into his shell.

It’s easy to tell whether Toliara likes us. He will approach, telling us he wants to be around us and doesn’t feel threatened. When he comes near, we will scratch his shell. He will wiggle his rear, showing us that he likes the scratches. If he doesn’t want to be scratched he will just walk away. Tortoises have blood vessels and nerves in their shells, so they can feel when their shells are touched. But no one except his keepers should touch him without special permission; you should never pet wild animals.

Toliara is put in an enclosure at night to protect him from predators. In the wild, radiated tortoises must watch out for birds of prey, snakes, cat-like mammals called fossa and other animals. But their main predators are humans. Radiated tortoises are endangered due to poaching and habitat loss. 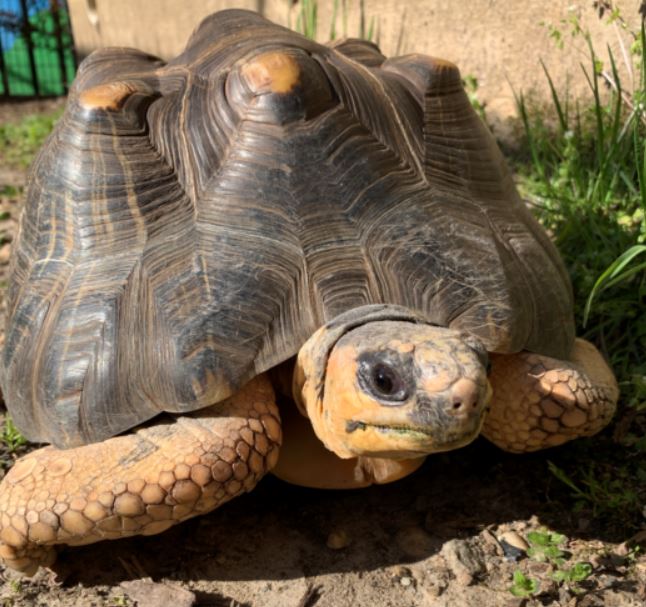 They come from the nation of Madagascar, the world’s fourth largest island, located off the southeast coast of Africa. Toliara is named after a city in that country where, in 2018, 10,000 radiated tortoises were confiscated from poachers.

Radiated tortoises are listed as critically endangered by the International Union for the Conservation of Nature. They are hunted for food and their beautiful shells. Small ones are also collected for the pet trade.

Toliara was confiscated by the U.S. Fish and Wildlife Service and came to us in November 2019 from another zoo that, like ours, is accredited by the Association of Zoos and Aquariums, a national organization dedicated to conservation, education, science and recreation.

The habitat of radiated tortoises has decreased by 20% over the last 25 years. Wild habitat in Madagascar is being lost to human population growth, deforestation, vanilla and coffee plantations, illegal rosewood harvesting and mining operations.

Estimates of how many radiated tortoises are left in the wild vary broadly, from 1.6 to 6 million. Their population has decreased by as much as 80% over the last 30 years. They could be extinct in the wild in 20 years.

Fortunately for Toliara, he’s at the Brandywine Zoo where he will soon be joined by two more male tortoises. In the very near future he will be moving to the zoo’s brand-new Madagascar exhibit. Toliara and his new neighbors will have a waterfall and pool, tons of plants to hide under, and lots of grass to graze on. Joining him will be three species of lemurs, helmeted guineafowl and other animals from Madagascar.

One of the goals of the new Madagascar exhibit is to showcase the endangered animal life found there. While you may never have the chance to go to Madagascar, the choices we all make here can make a difference. By buying sustainably sourced, fair-trade vanilla, coffee and sapphires, you will help protect habitat in Madagascar and provide the people there with sustainable sources of income.

For more information about what’s being done in Madagascar to help radiated tortoises and other wildlife species, we work with two conservation partners, the Madagascar Biodiversity Partnership and Conservation Fusion.

To make sure you can visit Toliara and the rest of the animals at the Brandywine Zoo, be sure to check days and hours of operation at the Zoo.