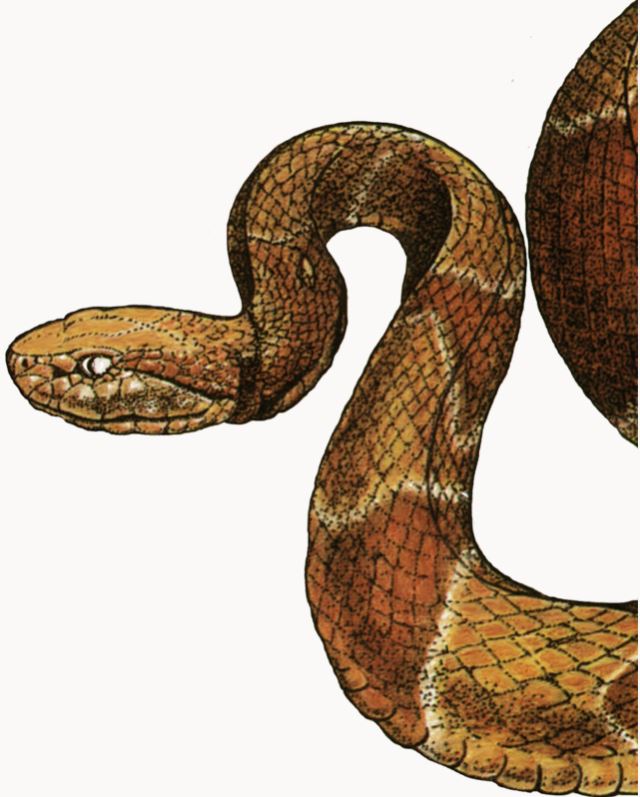 Love them or not, there are all kinds of snakes slithering around Delaware.

Despite its small size, there are 19 species of snakes in the First State. But there are just a few species that you may encounter, identified by the Delaware Department of Natural Resources and Environmental Control. The four most common species are the Eastern rat snake, black racer, common garter snake and common watersnake.

As for the others, DNREC’s Division of Fish and Wildlife has found that many are uncommon or secretive. The red corn snake and plain-bellied watersnake are state-listed as endangered due to limited habitat. Several, like the ring-necked snake and Dekay’s brownsnake are small — reaching no more than 15 inches in length as adults. And others, such as the Eastern hog-nosed snake and smooth earthsnake are burrowers and spend much of their time concealed in loose soil or leaf litter. 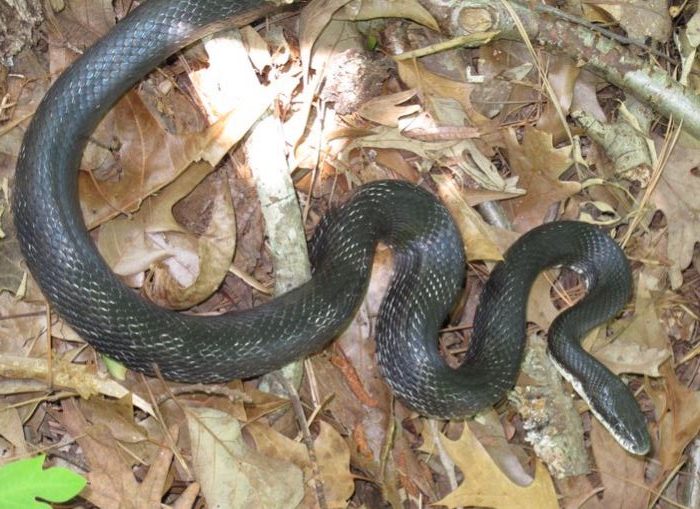 This snake will grow to be about five feet long as an adult. It’s mostly black with white around its mouth and chin, which continues down the throat and onto the belly. Juveniles look considerably different — they are gray to grayish-white with dark, square-ish blotches down the back.

They feed primarily on warm-blooded prey including mice, small birds and bird eggs.

Rat snakes are excellent climbers and can scale trees or poles to access bird nests, or even climb a brick wall of a house. They are harmless, although they will rear back in a strike position and may vibrate their tails if they feel threatened. When the tail vibrates in dry leaf litter, it may produce a sound similar to a rattlesnake’s rattle. 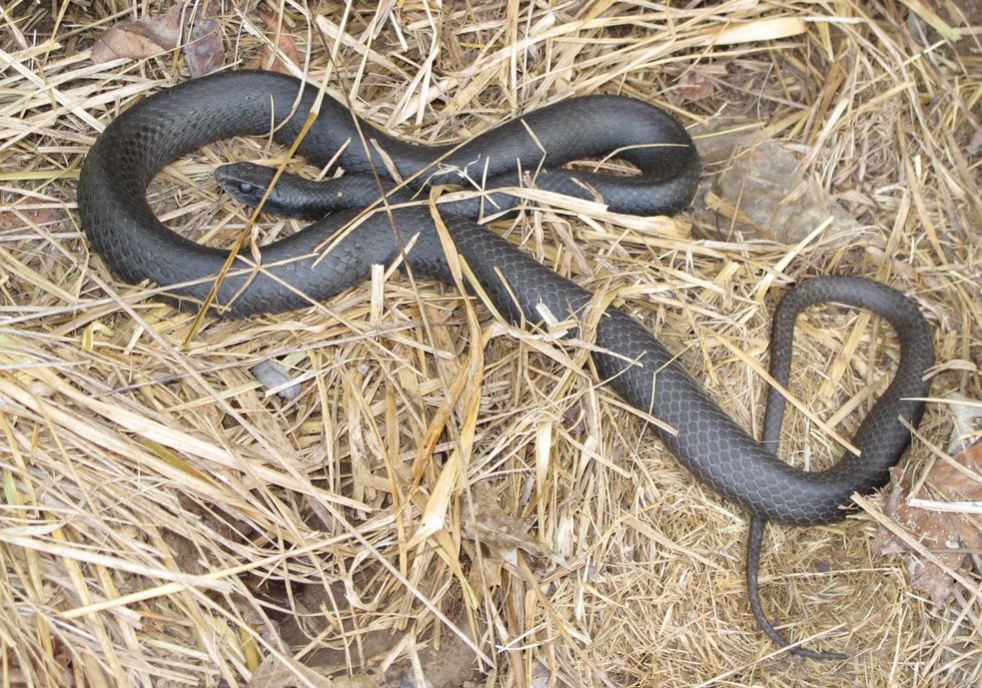 The black racer resembles the rat snake both in size and coloration. They are jet black with white on their chins. Hatchlings and yearlings are grayish with dark blotches on their backs, but they turn solid black in their second year of life.

Racers feed on a variety of prey, including small mammals and birds, frogs, and even other snakes!

As the name “racer” implies, they can move fast, slithering away at great speeds when startled. However, a cold or threatened racer may rear back in a striking position, strike aggressively and vigorously vibrate its tail. 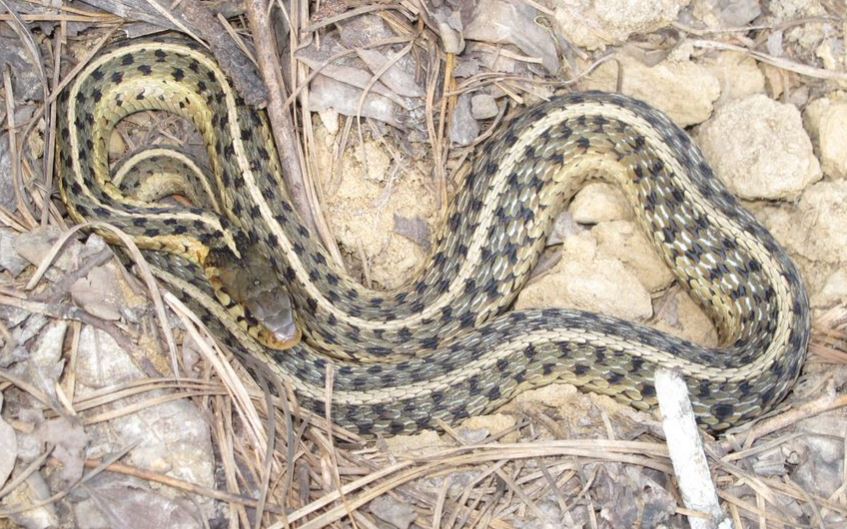 The common garter snake is greenish-brown, usually with a central yellow stripe flanked by a checkered pattern on the back. Adults are about 2.5 feet long. Although they are associated with aquatic habitats, they may also be found far from water.

This species is harmless and typically flees when encountered, but will aggressively bite if handled. 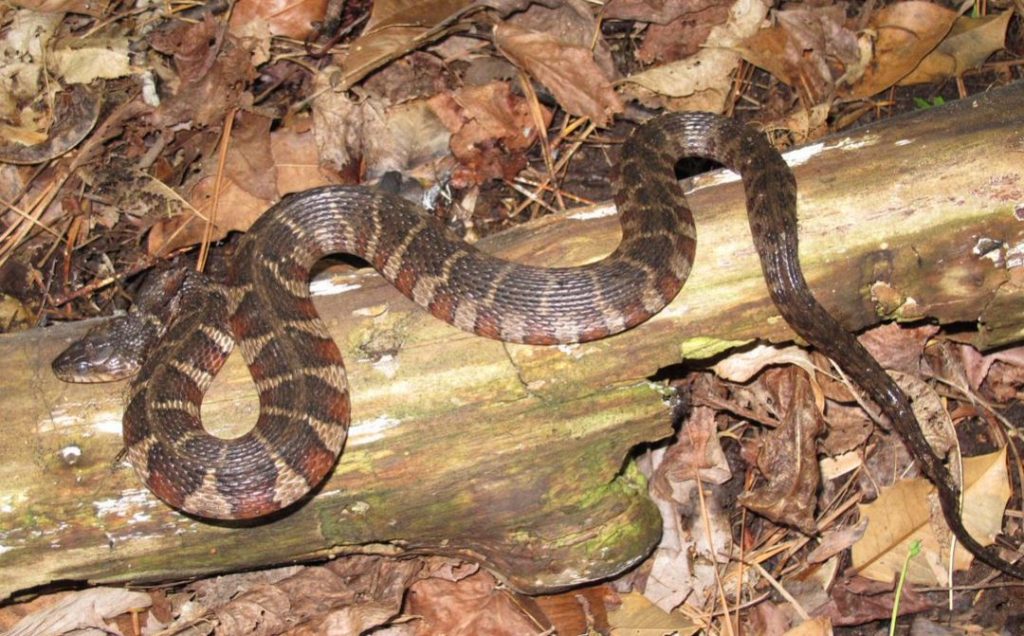 The common watersnake is about three feet long. It’s a brownish snake with dark crossbands across the back. These bands are widest along their backs and taper somewhat closer to the belly. They are usually found near water including ponds, streams, rivers, ditches and other wetlands.

They are also harmless and flee into water or a nearby hole when encountered, but will bite aggressively when captured.

Delaware only has one species of snake that is venomous – the Eastern copperhead. Although often reported throughout the state, this species is found only in southern Sussex County and near Wilmington. Reports from other localities, when supported with photographs, have turned out to be misidentifications most often of young rat snakes, watersnakes, and eastern hog-nosed snakes. 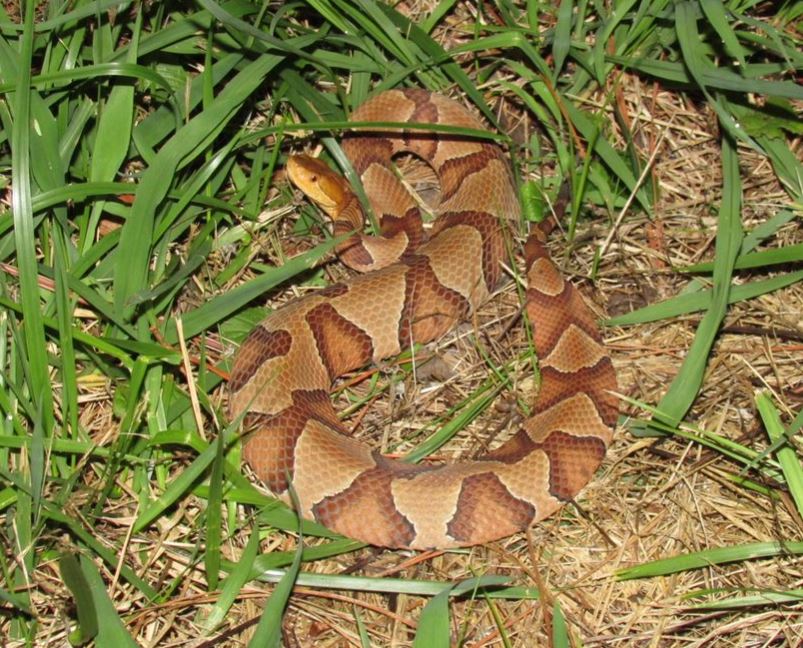 Despite people’s common identification errors, copperheads are one of the easiest snakes to identify in Delaware. In addition to their copper-colored head and cat-like vertical pupils, the copperhead is the only species of snake in Delaware that has dark hourglass shaped crossbands that are narrowest at the center of the back and wider at the belly.

Copperheads rely on their venom to capture prey and as a defense. Because their venom is essential to feeding, a snake may choose not to use its venom on a defensive bite. A bite from a venomous species that does not inject any venom is referred to as a “dry bite.” Dry bites represent about 25% of defensive bites.

Bites from copperheads are uncommon, and although the venom can cause severe tissue damage to the bite area, death from a copperhead bite is extremely rare. Regardless, anyone who suspects they were bitten by a copperhead should seek medical attention immediately.

If you are bitten by any snake, we recommend you try to get a photo of the snake so that proper treatment can be administered.

How to Avoid Snakes

Snakes are found in areas that provide food, shelter and areas where they find it easy to regulate their body temperatures. If you have noticed a snake hanging around your house, then your yard is likely providing these resources for the snake. The best way to keep snakes away is to eliminate these opportunities to make your yard less habitable for both snakes and their prey.

Keep your lawn and yard tidy — mow the grass low and frequently and do not allow weeds to take over flowerbeds. Snakes are less likely to move through low grass or sparsely vegetated areas because they feel exposed to avian predators, including hawks and owls.

Quick Tips to Keep Snakes Away

Nate Nazdrowicz is the state’s herpetologist within the DNREC Division of Fish and Wildlife.