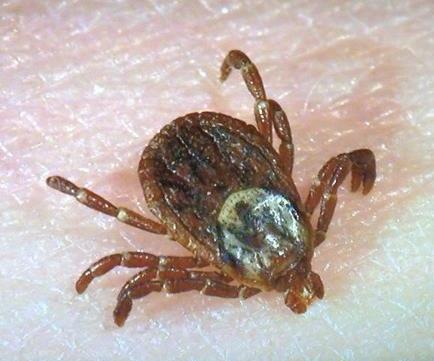 Last April, returning home after a day of work outdoors, I loosened my hair out of my ponytail and felt a familiar but unwelcome bump on my scalp. Based on the size and location, I immediately guessed what it could be – an adult American dog tick which often bites people on the head. I removed it immediately to get a closer look and confirmed my suspicions.

Tick bites are never fun, but I felt reassured by two things: I knew that the bump had not been there in the morning and a short attachment time means a lower risk of the tick causing a disease. I also knew that American dog ticks are not as likely to cause disease as other local tick species. Knowing which species bit you is important because each species carries different disease risks.

I often tell people that there are no “good” ticks per se, but if I had to choose, I’d rather be bitten by an American dog tick than the other common human-biting ticks in our area. The former carry only a low chance estimated at less than 1% of infecting you with a disease-causing organism, whereas the risk is much higher with blacklegged ticks (also known as “deer” ticks) and with lone star ticks.

What You May Not Know About Ticks

Knowing the life cycle stage of a biting tick is important, too: a larval (baby) tick is far less dangerous than a nymph (young) or an adult tick. That’s because nymphs and adults have already fed on an animal host and thus have had opportunity to pick up and transmit organisms that cause diseases. Larval ticks, in contrast, are just hatched out of their eggs and looking for their first blood meal so they are relatively safe. 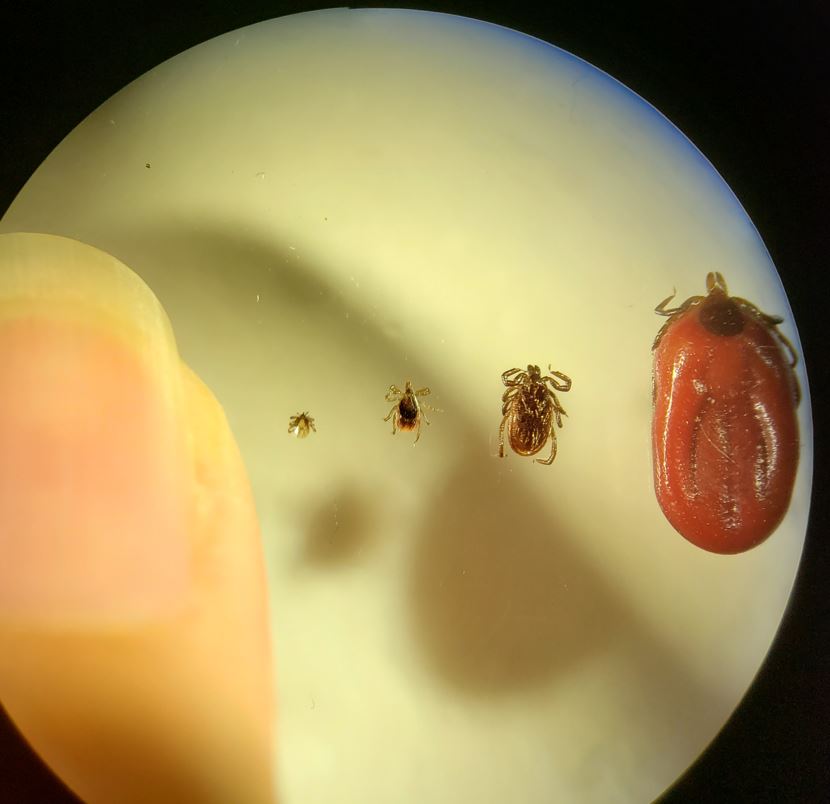 Given that the odds were in my favor, I decided to take a “wait and see” approach. I wouldn’t seek medical attention unless I developed typical tick-borne disease symptoms over the next few weeks. Luckily, the next month passed without any telltale signs such as fevers, aches or rashes.

If it had been a blacklegged tick bite, I probably would have decided on a more proactive approach visiting a healthcare provider to seek their opinion. A doctor may choose to prescribe preventive antibiotics in some circumstances, depending on risk (for example, if the patient lives in an area where tick-borne diseases are common or if the tick is a blacklegged tick). Blacklegged ticks are our local vector for the bacteria that causes Lyme disease as well as other serious illnesses. I have had Lyme disease in the past and I am not anxious to repeat the experience! Unfortunately, prior infection does not result in immunity, so you can get infected with Lyme disease again and again if you are bitten by infected blacklegged ticks.

New Castle County holds the dubious distinction of ranking 6th in the nation for per capita incidence of Lyme disease, according to the Centers for Disease Control (CDC). Our climate and landscapes in the northern part of the state provide ideal blacklegged tick habitat.

Even though the tick that bit me wasn’t carrying any disease-causing organisms, it left a nasty bite that was swollen, red and itchy. My scalp still itches now almost a year later! The good news is that the itchiness of a tick bite has no relation to disease transmission. The itchiness and swelling come from compounds in tick saliva that trigger a localized immune reaction even if the tick was “clean.” Just like with mosquito bites some people are more sensitive to tick bites than others.

Ticks in the Grass 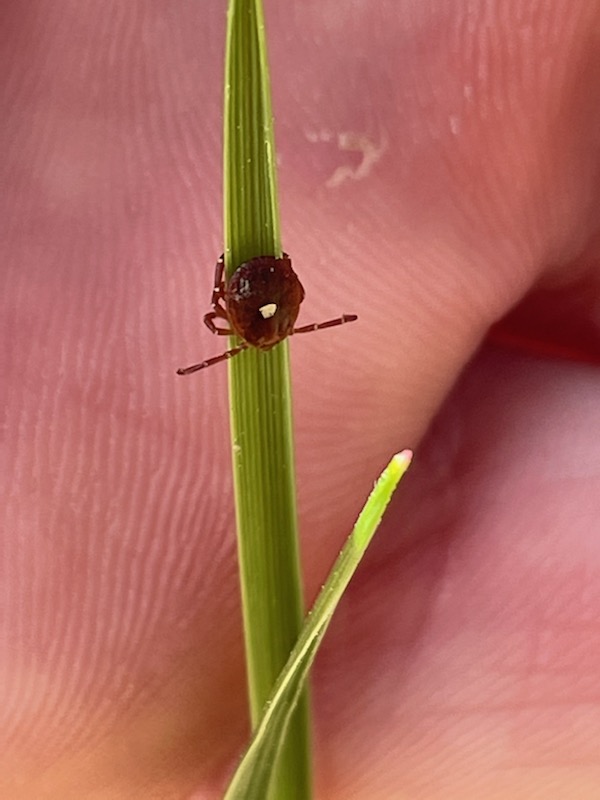 You might imagine that finding a tick on your head means that the tick fell on you from the trees above. Actually, ticks don’t climb trees and don’t jump or fall onto their hosts. Instead, they climb up grasses or other low-lying vegetation, typically no higher than knee-height, and wait for an animal host to walk by latching on when the host accidentally makes contact. This means that as long as you stick to the center of trails or short, mowed grasses when you are outdoors, ticks will not be able to grab onto you. Ticks need high humidity to survive, so they stick close to the ground in order to easily return to the leaf litter to regain body moisture as needed.

Ticks are found everywhere in Delaware and most bites happen in our own backyards. They are active year-round, not just in late spring/early summer which is prime “tick season.” They don’t spare children or pets, either.

Tick abundance and density are much higher in Kent and Sussex counties than in New Castle County, but New Castle County has a larger human population that may vacation or recreate downstate.

To keep your yard tick-safe you can keep grass short and trim tree branches to allow more sunlight to hit the ground making it uncomfortably warm and dry for ticks. You can also remove brush and any debris that might be attractive to rodents which are popular hosts for ticks. 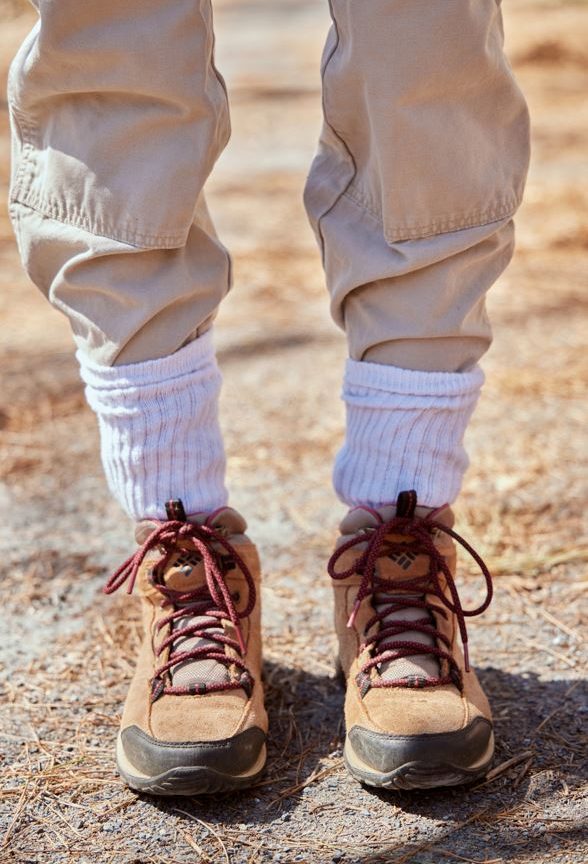 When you are in areas with high tick populations, stick to the center of trails and wear long pants tucked into socks to reduce the chance of picking up a tick. Use repellents and be sure to follow the directions on the label. When you return from outdoor activities, check for ticks and remove them from your skin as soon as possible to reduce the chance of disease transmission. For added security, you can put your clothes in the dryer at high heat for 5 minutes before washing them to kill ticks.

Remember to check your entire body because ticks can crawl unnoticed to areas that were not directly exposed. Taking a shower soon after coming indoors gives you the opportunity to check all your “nooks and crannies” but keep in mind that the running water won’t be strong enough to remove an attached tick.

The best way to remove a tick is to use tweezers and grab the tick as close to the skin as possible, then pull slowly and steadily away from the skin. Try to avoid jerking or twisting the tick, which may result in the mouthparts being left in the skin like a splinter. Wash the bite area with alcohol or soap and water afterwards, saving the tick for medical reference. You can keep it in a zip-sealed plastic bag or in a small, sealed container with rubbing alcohol. 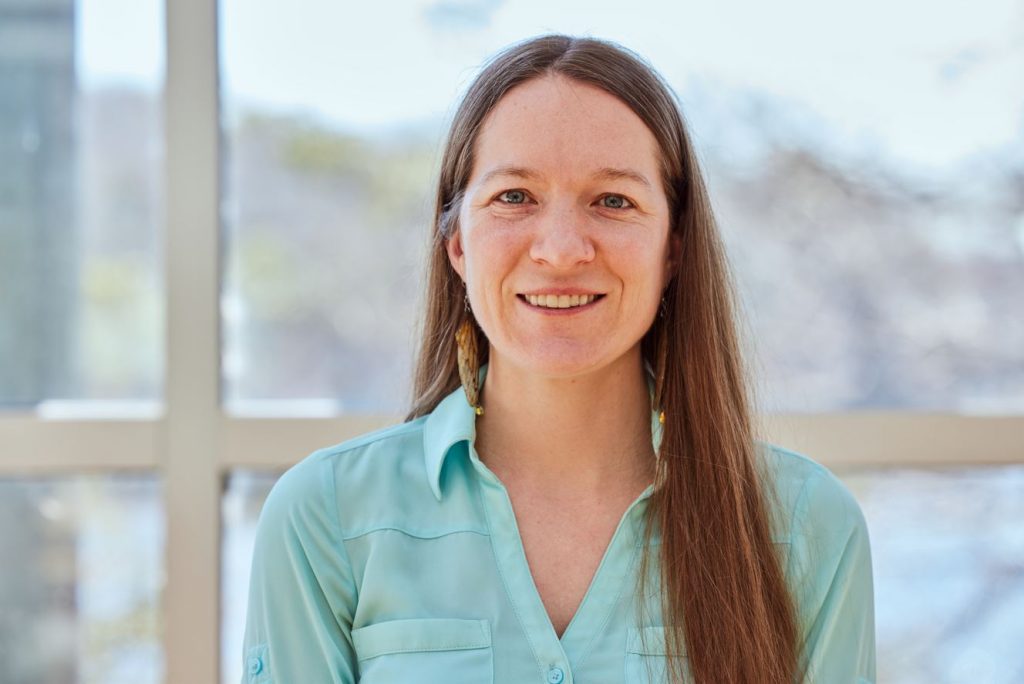 What to Watch For

If you’ve been in tick-prone areas or have been bitten by a tick, watch for symptoms of common illnesses caused by tick bites such as fevers, aches and rashes. But keep in mind that not everyone experiences all of these symptoms. Seek medical attention if any symptoms arise in the month following the bite.

For more information, visit de.gov/ticks and the Division of Public Health website at de.gov/lyme. You can also report tick interactions to the Division of Fish and Wildlife.

Dr. Ashley Kennedy is the state tick biologist in the Mosquito Control Section of the DNREC Division of Fish and Wildlife.

What You May Not Know About Ticks

To learn which tick species live in Delaware and where and when they are present, DNREC’s tick program actively conducts surveillance at 15 sites statewide twice monthly to record tick counts and types, along with a second set of sites monitored monthly. Here are some observations:

Ticks can be found throughout the state from northern woodlands to Bayshore wetlands.

Year-round tick monitoring shows tick activity even in winter months. While some species are not active in the winter, blacklegged (“deer”) ticks will be out and about looking for their next meal anytime temperatures are above freezing.

Basic tick biology makes populations highly resistant to control measures; low humidity and dryness are among the few conditions to which ticks are sensitive.

Black-legged (“deer”) ticks are the primary carrier of bacteria that cause the tick-transmitted illness Lyme disease in Delaware, with the peak season for ticks and Lyme transmission occurring in May and June. They also carry disease-causing organisms that cause the flu-like illnesses anaplasmosis and babesiosis.

Lone star ticks accounted for 96% percent of ticks collected in the past year by DNREC’s tick program and can also carry disease-causing organisms. They are associated with causing ehrlichiosis, a flu-like illness, and alpha-gal syndrome, an allergic reaction to eating beef, pork, lamb, venison and sometimes products containing dairy and gelatin.

American dog ticks are common in Delaware, especially during the spring and early summer. Despite the name, they will readily bite people as well as dogs. They carry a small probability of infection with the bacteria that causes spotted fever that results in fever, aches and a distinctive rash.

The invasive Asian longhorned tick is becoming increasingly common in Delaware since it was first detected here in 2019. It does not frequently bite people and its status as a disease vector needs further investigation.