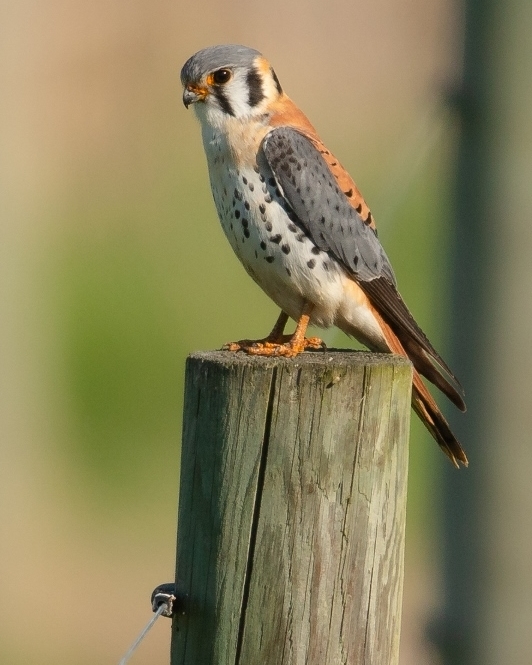 The American kestrel is a pint-sized yet ferocious aerial predator notorious for taking out tree swallows or bluebirds in mid-air. About the size of a mourning dove, this raptor is the smallest and most colorful falcon in North America.

Kestrel populations have been falling across the continent with the Mid-Atlantic having experienced a decline of more than 93%. From their levels in the 1960s, this is the greatest decline of any region in North America. In 2013, it was listed as endangered in Delaware.

Why Are Kestrels Declining?

The suspected culprits causing the kestrel decline are loss of nesting habitat, invasive species, pesticide accumulation, climate change and disease. The Brandywine Zoo’s goal of long-term monitoring in Delaware is to provide a reliable picture of population trends and influence conservation planning.

How the Brandywine Zoo is Helping

To understand more about the kestrel decline, the Brandywine Zoo has installed and monitored nest boxes around the state since 2014. 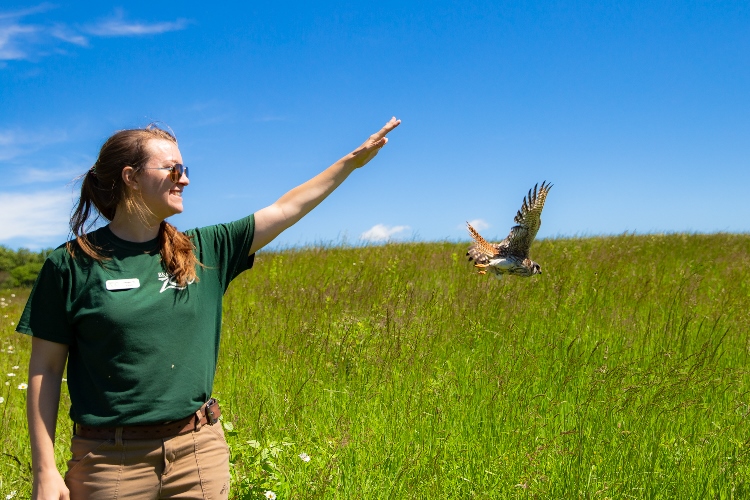 The Brandywine Zoo has 79 nest boxes installed on both private and public lands. The boxes are located from parks to conservation tracts as part of a cooperative program among the zoo, DNREC’s Division of Fish and Wildlife, and other organizations. The zoo’s education department coordinates the data collection for the project and shares this information with the Delaware Kestrel Partnership, a group of state conservation organizations researching the causes of the kestrel’s decline.

The project is the zoo’s first time studying animals in the wild and it provides many opportunities to contribute to national research projects while also studying a local endangered species. 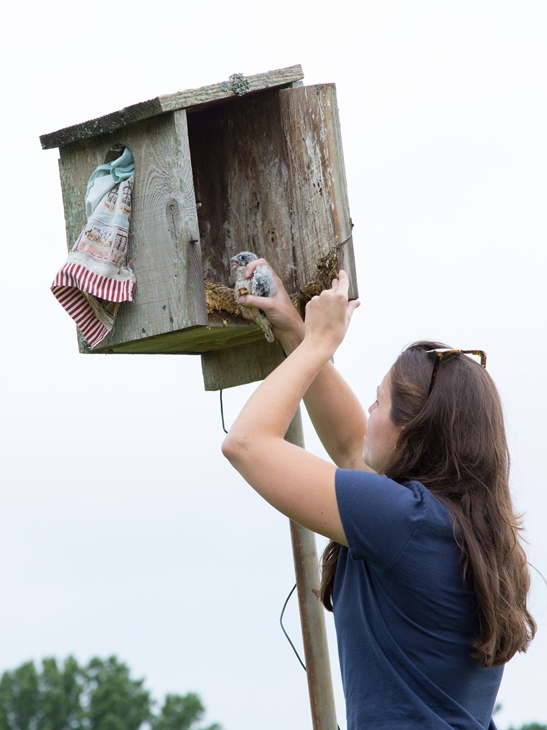 Banding kestrels is our best way to learn about their demographics and population. Our season begins in February with cleaning out and checking nest boxes. In 2019, our research apprentice and a team of volunteers monitored 74 boxes across all three counties. Our apprentices visit each box to clean out any debris and refresh them with pine shavings.

Beginning in March, we visit each nest box once every seven to 10 days, to survey the area for kestrels before approaching a box. Monitors use a GoPro-style camera on a telescoping pole to check inside the nest box for evidence of a “scrape.” A scrape tells us that a kestrel is preparing the box for nesting, since the wells they form in the shavings create a perfect bowl to keep their eggs from rolling around.

When a kestrel is sighted near a nest box, our monitoring changes to twice per week so that we can determine the date of the first egg laid. From that date we can estimate a time to return and confirm clutch completion.

Then it becomes a waiting game. We schedule 30 days from clutch completion to return to check for chicks hatching. Once that is confirmed we schedule chick banding windows of between 14 to 23 days. 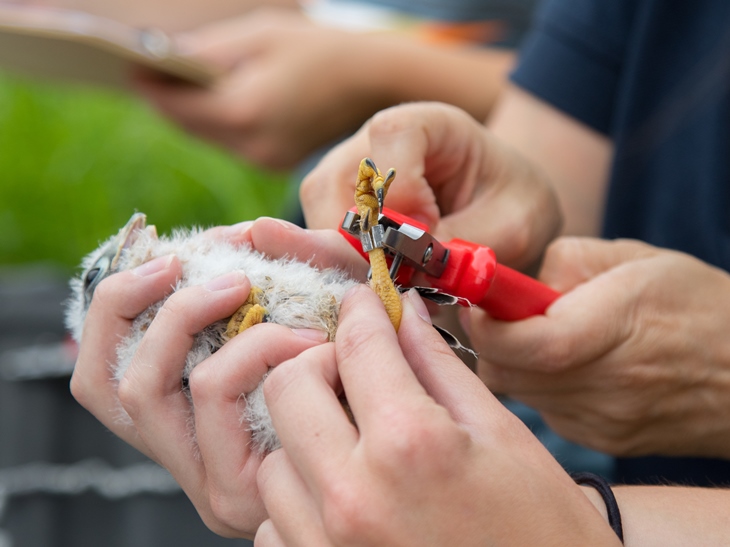 Incubation begins once kestrels complete their clutch of about five eggs. This is when we can return to the box after a week or two and trap the adult in the nest box to band it. Trapping is done using a net on a long pole, with half the net covered by a plastic board zip-tied in place. We use the board side of the net to cover the nest box entrance hole to secure the bird inside while we get a ladder in place. Then we can climb the ladder and carefully open the nest box, reach in and pull the bird out.

Chicks are easier to retrieve from the box, since we band them before they can fly. We put a ladder up to the box and stuff a cloth into the cavity. Then we open the box and remove each chick. Chicks are placed into individual bags for safety and holding.

We use the same banding process for adults and chicks, and we start by weighing the bird in its holding bag. We later subtract the weight of the bag to determine how much the bird itself weighs. We measure its “shin” length – the talon on the back toe. Then we measure the beak length from the flesh of the kestrel’s nose to the tip of its beak and from the “wrist” to the tip of the longest primary feather. Finally, we measure tail feather length. We also check for “crop fullness,” which tells us how recently they’ve eaten, and if there are any parasites.

When it’s time for the banding itself, we measure the width of the bird’s “shin” with a special tool to check which band size we should use. Then the band gets opened with a pair of special pliers and crimped around the bird’s leg. We record and double check the band number, and the banding is done. If it’s an adult, we simply let it fly away. If it’s a chick, we process the rest of the clutch and put them all back when we are done. Chicks will fledge from the nest between 28 to 32 days of age and continue to linger in the nest box area for several weeks after fledging.

As the cause of the kestrel’s decline is still unknown, banding and feather sampling are just two ways of understanding where kestrels are going, whether they return to the same areas for nesting annually and how the species’ dispersal may impact their long-term survival.

Jacque Williamson is Curator of Education & Conservation at the Brandywine Zoo. Photos © 2020 by Doug Norton

A version of this article appeared in the fall 2019 issue of Outdoor Delaware and as been updated.