The Inland Bays Pollution Control Strategy (PCS) and accompanying regulations were finalized in Nov. 2008. This strategy is designed to improve the water quality of the bays (Rehoboth Bay, Indian River Bay, and Little Assawoman Bay), as well as the rivers, streams, and ponds that drain to the bays.

ADVISORY: A legal challenge to the Inland Bays Pollution Control Strategy regulations led to a 2011 Delaware Superior Court decision that declared the buffer portions void and unenforceable (Section 4 and those portions of Section 5 adopting the buffer requirements under Section 4). The Delaware Supreme Court affirmed that decision.

The Strategy still contains other regulatory components that remain in effect as well as numerous voluntary actions.

In response to the federal Clean Water Act, DNREC prepares and submits a combined Watershed Assessment Report and list of impaired waters (305(b) Report and 303(d) List) to the Environmental Protection Agency (EPA) every other year. 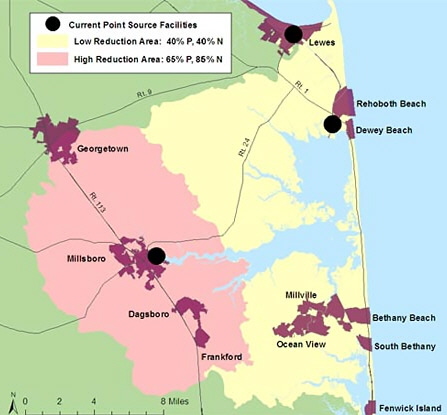 Through this work, DNREC has determined that the water quality of the Indian River, Indian River Bay, Rehoboth Bay, Little Assawoman Bay, and their tributaries is impaired by elevated nutrient levels and low dissolved oxygen concentrations. These impairments cause macroalgae and phytoplankton blooms, large daily swings in dissolved oxygen, habitat loss, reduced populations of aquatic life, and fish kills.

These symptoms threaten the future of the Inland Bays and their significant natural, ecological, and recreational resources.

The environmental degradation and habitat loss may also result in adverse impacts to local and state economies through reduced tourism, a decline in property values, lost revenues, and a diminished quality of life. Therefore, the excessive nutrient levels pose a significant threat to the health and wellbeing of people, animals, and plants living within the watershed.

A Total Maximum Daily Load (TMDL), or the maximum amount of a pollutant that can enter surface waters from point and nonpoint sources and still meet water quality standards, must be determined for each impaired water body. Point sources include any facility with a National Pollutant Discharge Elimination System (NPDES) permit. Nonpoint sources are spread across the landscape and are most often associated with agriculture and the wastewater and stormwater from developed lands.

DNREC established TMDLs for nitrogen and phosphorus in the Indian River, Indian River Bay, and Rehoboth Bay in 1998, and in the Little Assawoman Bay and the tributaries of these waterways in 2005.

The TMDLs call for the systematic elimination of all point sources of nutrient loading, a 40 to 65 percent reduction in nonpoint phosphorus loading, and a 40 to 85 percent reduction of nonpoint nitrogen loading. The nonpoint source reductions required in the Inland Bays Watershed, a dynamic home to agriculture, development, and tourism, are among the highest in the State.

The TMDLs also call for implementation through a Pollution Control Strategy.

To identify nutrient reducing actions that could be implemented in the Inland Bays Watershed, DNREC worked with a diverse group of stakeholders, called a Tributary Action Team, for several years. Beginning in 1998, the team developed a set of recommendations, including voluntary and regulatory actions, to reduce nutrients entering the streams, ponds, and bays of the watershed.

The resulting Pollution Control Strategy (PCS) focuses on pollution caused by the activities of people and is based on the premise that since we all contribute to the sources of pollution, we all need to act to improve water quality. The PCS actions focus on four main areas of pollution: agriculture, urban land use, stormwater, and wastewater.

The draft of the Inland Bays PCS, including draft regulations, was initially presented at a public workshop in February 2005, and then again at  several other public feedback events over a three year period.

Although changes have been made to address public comments received between 2005 and 2008, the Inland Bays PCS is based upon the recommendations offered by the Inland Bays Tributary Action Team.

During the summer of 2008, DNREC formally proposed a regulation that includes provisions requiring riparian buffers, improved stormwater management, and additional standards and measures for onsite wastewater treatment and disposal systems (septics) in the Inland Bays Watershed. These regulations, designed to reduce nonpoint source pollution with certainty, are the first of their kind.

The regulations were proposed in the June 1, 2008 Delaware Register of Regulations, opening a month-long public comment period.

A public hearing, attended by more than 400 interested individuals, was held on June 23, 2008 at the CHEER Center in Georgetown. A wide range of comments were received, with some in opposition to the proposed regulations, some in support of the regulations as written, and some requesting additional regulatory actions.

The majority of comments focused on the proposed buffer and onsite wastewater treatment and disposal system provisions.

The hearing officer reviewed all comments received on the proposed regulation, and the Department’s response to comments, and reported to the Secretary, who then signed an order to adopt the regulation.

The adopted regulation was published in the Delaware Register of Regulations on November 1, 2008.

Please feel free to download the following files for detailed information on the voluntary and regulatory actions of the Inland Bays Pollution Control Strategy. Please note the ADVISORY above when reviewing these documents as any references contained within these documents to regulatory buffers are currently void and unenforceable.

The documents are made available to provide background information on the Inland Bays PCS process, those regulatory actions that are still in effect, and the numerous voluntary actions that are needed to achieve water quality goals.