The State of Delaware and New Castle County have dedicated funding to remediate old debris pits. If you believe you have a debris pit, both can assist you in determining the best course of action.

Debris Pits and Sinkholes Are a Problem

In areas where land was cleared in the 1960s, 70s and 80s, sinkholes have begun appearing where wood debris was buried. Commonly known as debris pits, these sinkholes pose several threats to human health.

First, they can literally open up, creating voids in the ground that can drop many feet down. These voids are sometimes narrow and devoid of oxygen, making them difficult to escape and potentially lethal.

If structures have been built over debris pits, the settling of debris under structures can lead to significant and sometimes severe structural damage. 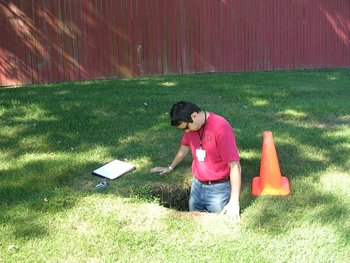 There are three indicators to look for if you suspect a debris pit on your property: subsidence, distressed vegetation, and sinkholes.

An area of the yard has settled and is lower than surrounding land. The difference in elevation can be a few inches to a couple of feet, depending on the amount of settlement that has occurred. Cracks in the soil at the edge of the subsided area may be visible. The natural settlement and decomposition of the waste mass cause subsidence. Subsidence can also occur in areas where soils used for fill have not been properly compacted.

Plants and grass will not grow, or else grow poorly in a specific area, as a result of gases produced by decomposing debris. While this is one possible indication of a debris pit, distressed vegetation can be caused by other many factors.

An open hole or holes that suddenly appear in your yard. Sinkholes may appear small at the surface but can be cavernous immediately below the ground’s surface and should be approached with caution. As a safety precaution, sinkholes should be covered with plywood or a suitable substitute and children should be kept away until the cause of the sinkhole can be determined and the problem corrected. Sinkholes are formed when large void spaces within the buried debris become exposed at the surface of the ground. The debris within the debris pit is sometimes visible within the sinkhole. Sinkholes can also be formed by improperly channeled storm water or by abandoned septic tanks that have degenerated.

Here’s What You Can Do

Here is a summary of your options for addressing a debris pit on your property.

As long as you or your contractor complete the work according to state program specifications, and the work has been monitored by Division of Watershed Stewardship program staff, you may be eligible to receive up to $10,000 in reimbursement payments. Documentation of costs is required.

The New Castle Conservation District will remediate debris pits whose owners are willing to contribute twenty-five percent of the cost of remediation, including disposal costs, for projects up to $40,000. For remediation projects over $40,000, the landowner must provide $10,000 plus 10% of the cost in excess of $40,000, including disposal costs. Work will begin almost immediately.

The State will remediate debris pits free of charge. However, there is a waiting list of projects that has been up to several years in the past.