The project to dredge Massey’s Ditch, an important navigation channel in the Inland Bays, was completed on February 27, 2020. The demobilization and removal of equipment such as pipeline concluded in mid-March 2020.

The channel runs between Rehoboth Bay and Indian River Bay. The dredging project improved navigation for commercial and recreational boaters that use the channel to navigate in the Inland Bays. Additionally, the dredged material helped to re-nourish eroding ocean shoreline on the north side of Indian River Inlet.

Massey’s Ditch was dredged to a width of 100 feet and a depth of 7.5 feet below Mean Lower Low Water (MLLW). A contractor removed approximately 140,000 cubic yards of material from the channel and adjacent areas. These included the entrance to Baker’s Channel, on the north side of Lynch Thicket Island, and a large shoal between the south end of Lynch Thicket Island and Middle Island.

Dredging took place from the beginning of January 2020 to the end of February 2020.

The material that was dredged was primarily beach-quality sand. Using it to re-nourish the beach north of the inlet provided erosion and storm damage protection to the Route 1 highway and bridge approach. This material also helped to restore a popular public recreational beach area.

The dredged sand was pumped onto the beach where waves and currents helped spread it to the north and south. This cost-saving strategy reduced the need to use heavy equipment on the beach. Even though the project was done during the winter when there aren’t many people in the water, the DNREC Recreational Waters Program tested the water quality during the project and observed that the project did not negatively affect the water quality at the beach.

The Division of Watershed Stewardship tries to use dredged sediment in a beneficial way whenever possible. This project, which cleared sand from a shoaled channel and placed it on an eroding beach area, is an example of efficient and beneficial use of dredged material.

Along with the dredging, a monitoring project began in partnership between DNREC and the University of Delaware that will study how the beach changes as a result of the project. The project will help shoreline managers understand if the methods used during this project could be improved in the future. 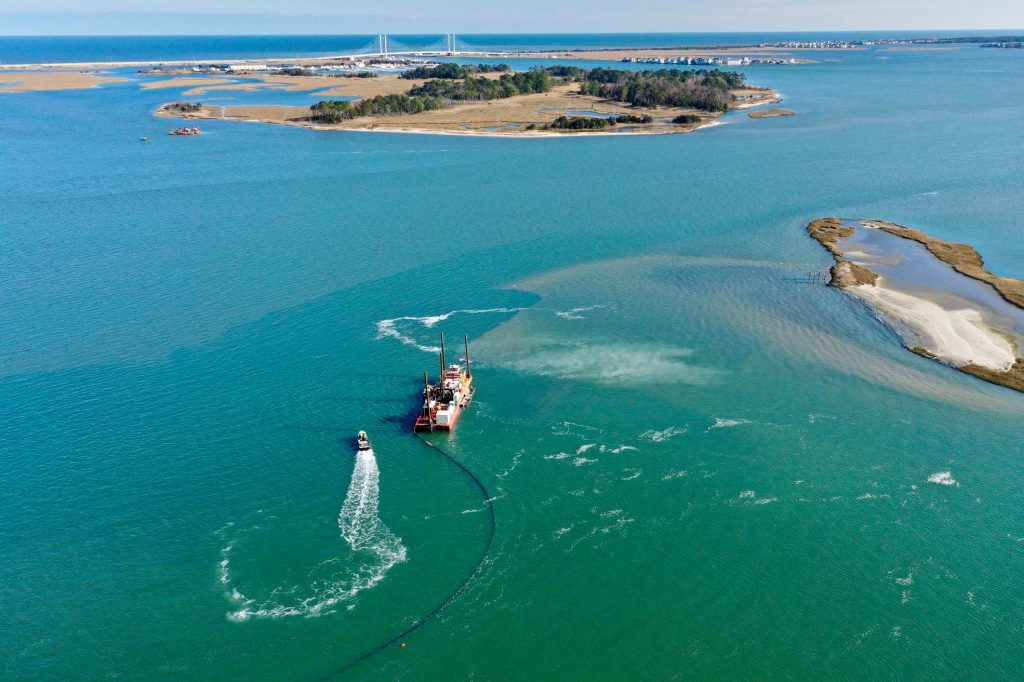 J. F. Brennan Company of La Crosse, Wisconsin was the contractor for the project. The base bid to remove 100,000 cubic yards of sand from the channel was $3.6 million.

Upon starting the project, the contractor discovered that about 45,000 cubic yards of additional sand was available. DNREC made the decision to dredge as much as possible because of the dual benefits to navigation and the beach.

The total cost of the project after adjusting for the additional material is approximately $4.6 million. The project funding came from the state’s Waterway Management Fund, Beach Preservation fund, and annual appropriations from the General Assembly.

The Massey’s Landing channel is one of about a dozen federally-authorized channels in Delaware. It is the responsibility of the U. S. Army Corps of Engineers to operate and maintain the navigability of these waterways. This includes maintenance dredging where necessary and channel condition surveys.

However, federal funding has not kept pace with dredging and infrastructure repair costs for these channels. Limited federal resources are often focused on channels that support commercial tonnage and are considered to be economically high-performing. The Massey’s Ditch project does not compete well in the Corps’ process for determining dredging needs. It has not received federal funding since the 1970s.

In the absence of federal funding, the State has paid for dredging of Massey’s Ditch five times since the 1980s.