Wetlands protect us against flooding and erosion of our shores.

Wetlands act like sponges during floods, capturing rain and flood waters. Later, they slowly release the water downstream. A one-acre wetland can store 330,000 gallons of water to a depth of one foot.

According to a recent EPA review, “The existing wetlands surrounding Boston have been attributed with avoiding $42,111 (adjusted to 2012 dollars) per acre per year based on the role they play in preventing flood damage alone…” and “Wetlands in Massachusetts have been estimated to prevent over $40 million in flood damage state-wide annually.”

Construction of flood control facilities to replace the flood storage capacity lost by filling wetlands would, in most cases, be cost prohibitive.

When runoff enters a wetland, the flow of the water is slowed by vegetation. Wetlands along the edge of streams, bays, ponds, and other water bodies help to stabilize shorelines and prevent erosion from occurring, fortifying the shore while also preventing sediment from reaching downstream. 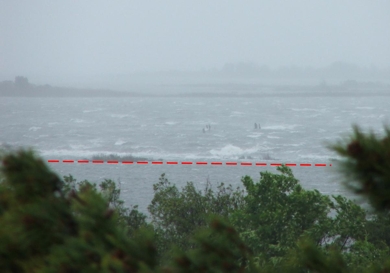 The red line here marks the salt marsh shoreline of Rehoboth Bay during a 2008 Nor’easter. Note the way wave energy is reduced at the shoreline.

Erosion can lead to the need for costly and potentially environmentally damaging dredging to clear channels and waterways that are choked with sediment generated by runoff that is not buffered by wetland vegetation.

Reduce Storm Impacts and Act as Barriers to Waves and Erosion