Since 1974, the Division of Fish and Wildlife has conducted annual waterfowl surveys to measure long-term trends in duck and goose populations. The survey results help increase biologists’ knowledge about the state’s waterfowl populations and habitat and help the state make informed decisions about habitat management and hunting.

Although imperfect, surveys are a useful tool for waterfowl managers. Regular counts and long-term data help managers make informed policy decisions. In most cases no single survey count is especially important in itself, but cumulative counts have revealed important changes to waterfowl use of Delaware’s wetland habitats over the years.

For example, the state’s waterfowl surveys, along with similar surveys conducted in other Atlantic Flyway states, detected declining migrant populations of Canada geese in the 1990s, reduced use of Christiana marshes by ducks after Interstate 95 was built, and increases in duck abundance at Prime Hook National Wildlife Refuge after successful phragmites and water control.

Winter counts are used as a measure of Tundra Swan annual production. These data are also used in setting season frameworks for Atlantic Brant and other species.

Surveys are carried out via a small plane with a pilot and biologist aboard, taking similar routes and using the same techniques each time.

Each survey is flown using the same east-west transects to minimize data bias and allow for across year comparisons.

Traditionally, flights were conducted in October, November, December and January. The January flight coincided with the nation-wide Mid-winter Waterfowl Inventory conducted by the U.S. Fish and Wildlife Service.

The state surveys cover most of the primary waterfowl habitat in Delaware, as identified by previous studies. The survey area approximately covers the eastern half of the state, and is divided into 11 zones. From 2010 to 2019, aerial surveys were flown twice monthly, but only in the zones that coincide with greatest waterfowl abundances as identified from analyzing 40 years of survey data.

With any survey method, not every duck and goose can be seen equally well from a plane. The surveys give fairly accurate information about geese, due to their large body size. Some duck species such as wood ducks and sea ducks, are difficult to count due to the wetlands they inhabit or similar plumage characteristics.

Waterfowl counts are conducted within the following zones:

C&D Canal to line from Liston Point to Kenton (statewide).

East of Route 1 from Broadkill River to Lewis-Rehoboth Canal, south of Gordon’s Pond.

South of Gordon’s Pond and all of Rehoboth Bay.

All Indian River Bay west to Millsboro and south to Salt Pond. 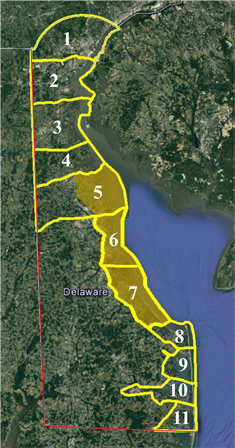