The Operation Game Theft Fund was established by the Delaware General Assembly to assist in the apprehension and conviction of game law violators. Rewards of up to $1,000 are available for information leading to the arrest and conviction of violators. 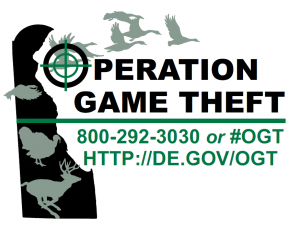 The Operation Game Theft Fund consists of all game law violation fines paid in Delaware and donations from various sources. The Division of Fish and Wildlife was given authority to designate offenses for which rewards will be paid, and the amount of those rewards.

You will be given an Operation Game Theft Case Number. You do not need to give your name at this time. From this phone call, a Fish and Wildlife Natural Resources Police Officer will be dispatched or can return your call.

Or report a wildlife violation online.

Wildlife offenses need to be investigated immediately by a Natural Resources Police Officer if there is to be a chance of making an arrest. The longer the delay in getting information to the Officer, the smaller the chances of obtaining an arrest and conviction.

Your identity will be kept strictly confidential.

You will be paid in cash for information you provide which leads to the arrest and conviction of a violator.

Note: An additional $100 reward will be paid by the Delaware Chapter of the National Wild Turkey Federation for information leading to the arrest and conviction of anyone illegally killing a wild turkey in Delaware.