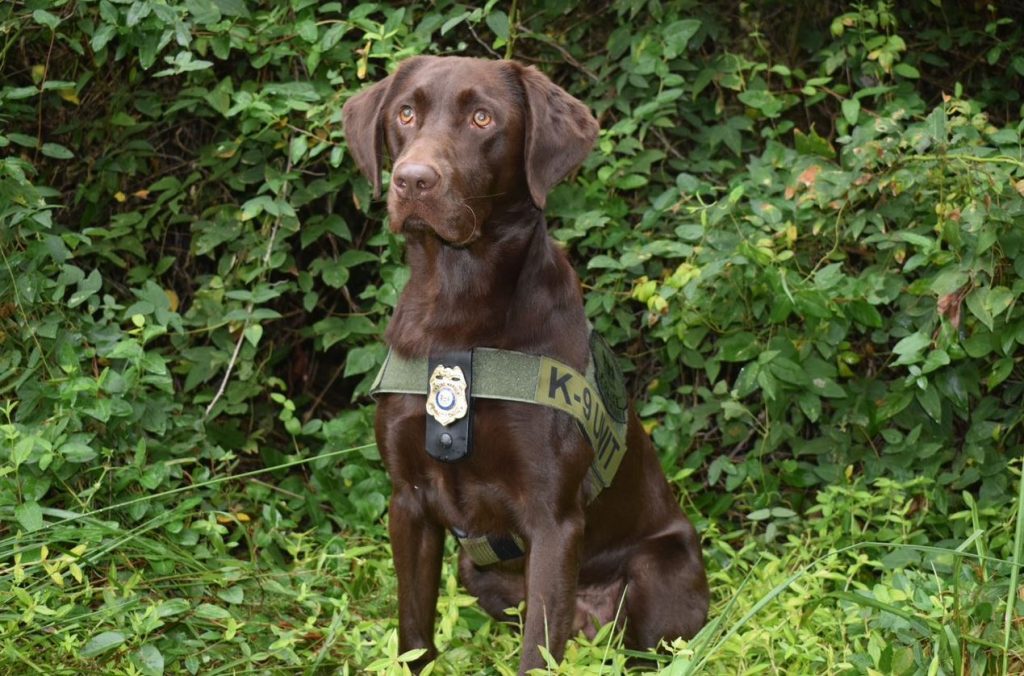 They’re officers with our Natural Resources Police. But instead of two legs they have four. They’re German Shepherds, Belgian Malinois and Labrador Retrievers. They wear police-identified vests and badges, and sometimes even body armor when a situation calls for it.

Make no mistake, they are crucial to our overall law enforcement efforts at the Delaware Department of Natural Resources and Environmental Control across three divisions: Community Affairs’ Environmental Crimes Unit, Fish and Wildlife, and Parks and Recreation.

Our Natural Resources Police officers are charged with enforcing a wide variety of Delaware’s laws and regulations, investigating environmental crimes, improving our quality of life, and protecting the public. And our Natural Resources Police depend on the work their canine officers do. They provide immediate backup if their human partners get into trouble, help with everyday activities and make their partners’ jobs easier when protecting the public.

K-9 Ofc. Leo is a four-year-old German Shepard who serves in the DNREC Division of Parks and Recreation. He trained for six months with the Delaware State Police Canine Unit. Like our other law enforcement divisions, Leo helps the parks division carry out its mission and is considered essential. 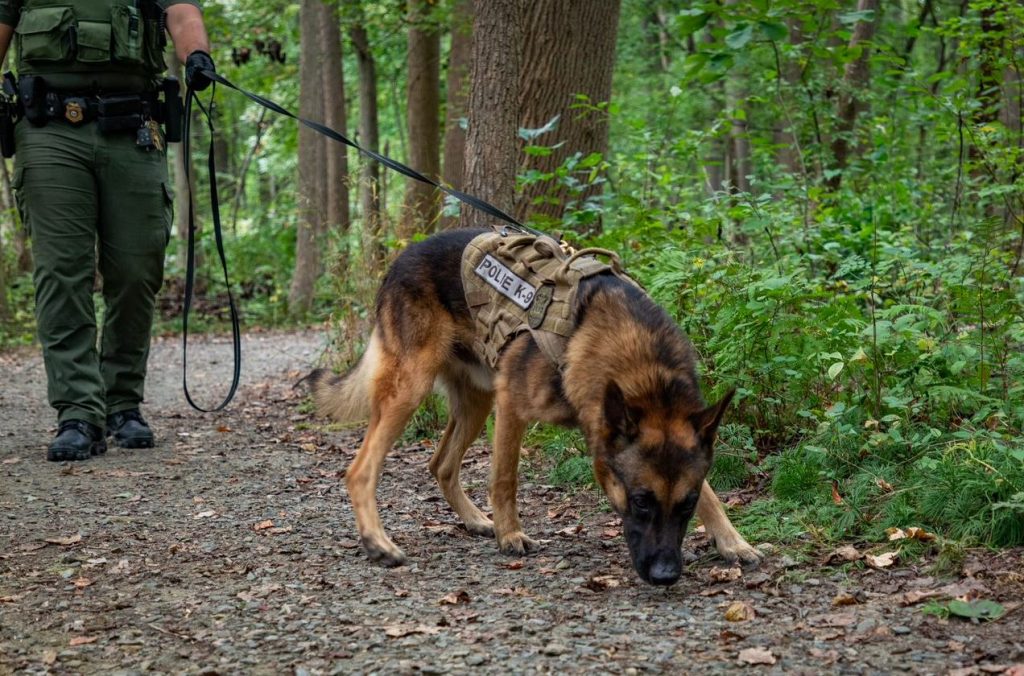 Rosco is a 60-pound Chocolate Lab K-9 officer with DNREC’s Division of Fish and Wildlife. Along with K-9 Ofc. River, they always go above and beyond the call of their duties.

Rosco and River are both certified in human tracking, whether they are looking for a bad guy or a missing child. They help find evidence that could be crucial in criminal cases. And Rosco and River can find and alert their human partners of certain types of wildlife that lawbreakers may be hiding. Vos, a five-year-old Belgian Malinois, has served with the Environmental Crimes Unit since 2018.

110-pound Diesel is a German Shepherd/Belgian Malinois mix with DNREC’s Environmental Crimes Unit. Among other jobs, he is trained in explosives detection.

All of the K-9 Units have experienced situations that have been dicey at times. For example, Diesel has been involved in countless explosives searches all over the state. When he and his partner find themselves in dangerous situations, it’s not uncommon to hear after the fact that his handler was glad his K-9 partner showed up to help. 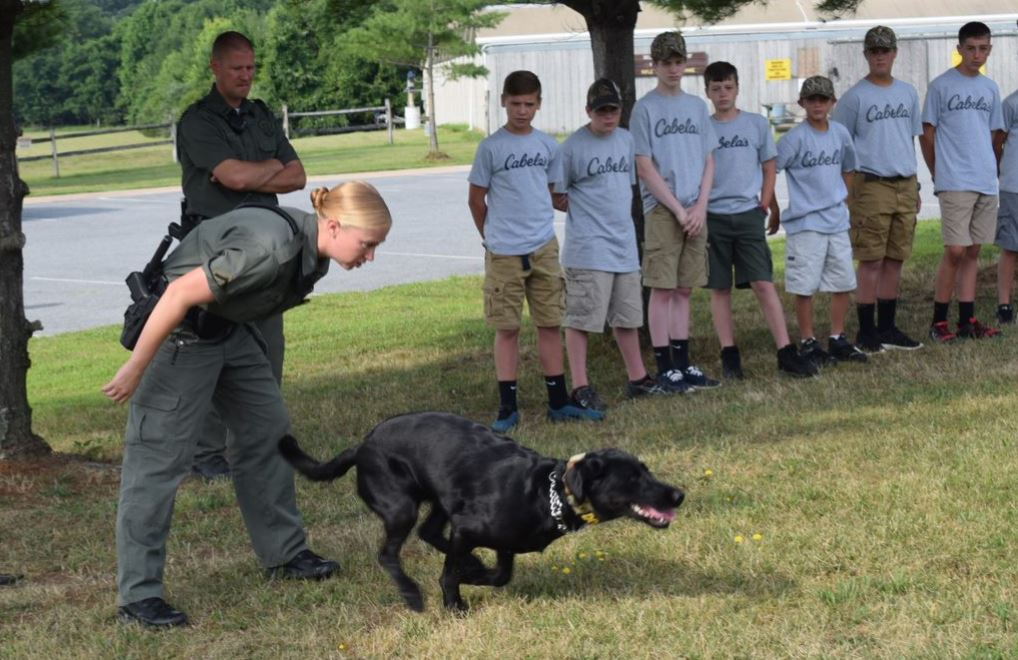 Some of DNREC’s Natural Police K-9 officers had training from the time they were puppies. But like all of DNREC’s Natural Resources Police officers, Leo and his handler trained for six months together with the Delaware State Police Canine Unit.

But when Vos began training, he was considered a green, or untrained, dog. He and his partner went through the Delaware State Police training program where a master instructor would instruct his handler how to command Vos. This method of training led to a better bond and working relationship between the two and provided his human partner much more knowledge about how Vos works.

Their initial patrol training took three months, during which they were instructed in building and area searches, human trafficking and apprehending suspects. Following that, they returned for another three months for Vos to learn specialty narcotics scent training.

Since then, Vos has assisted in suspect tracking and been involved in numerous search warrants. Vos has located the presence of illegal narcotics several times, leading to multiple arrests.

Are there complications working with K-9s? All units agree there can be challenges when working with dogs, but continued training and time together allows them to perfect any discrepancies and work together as a team. 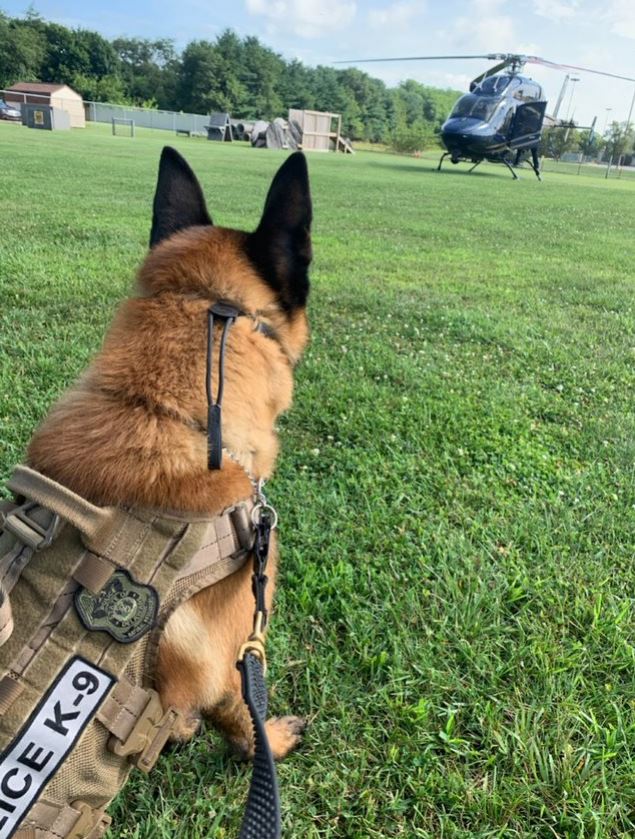 The greatest challenge at the beginning is learning each other’s personalities. It’s kind of like working with a new co-worker and just trying to figure out how you both work best together.

But the K-9 Units’ handlers gladly accept these tests. Most handlers have always been “dog people” and some have other dogs at home. Others even say the K-9 program is a calling. Their handlers say the best part of working together is having a partner every day in the back seat who is ready to go anytime he is needed. They get to go to work with their best friends.

Off vs. On Duty

The bond between K-9 officers and their human partners is strong whether they’re working or not. When they’re off duty, K-9 partners turn into “regular” and happy dogs.

Leo, for example, is just like any other dog when he is at home. He has a pretty good understanding that when the vest comes off, he is home and can relax. He can be like every other dog who loves to get outside and play fetch – and could do so for hours.

On the other hand, when they are on duty, you should never try to pet the K-9 officers unless given permission. They’re on the job whether they are near their human partners or not. You’ll easily see their clearly marked vests and badges. When you see a K-9 officer, you can be assured they’re there to protect you.