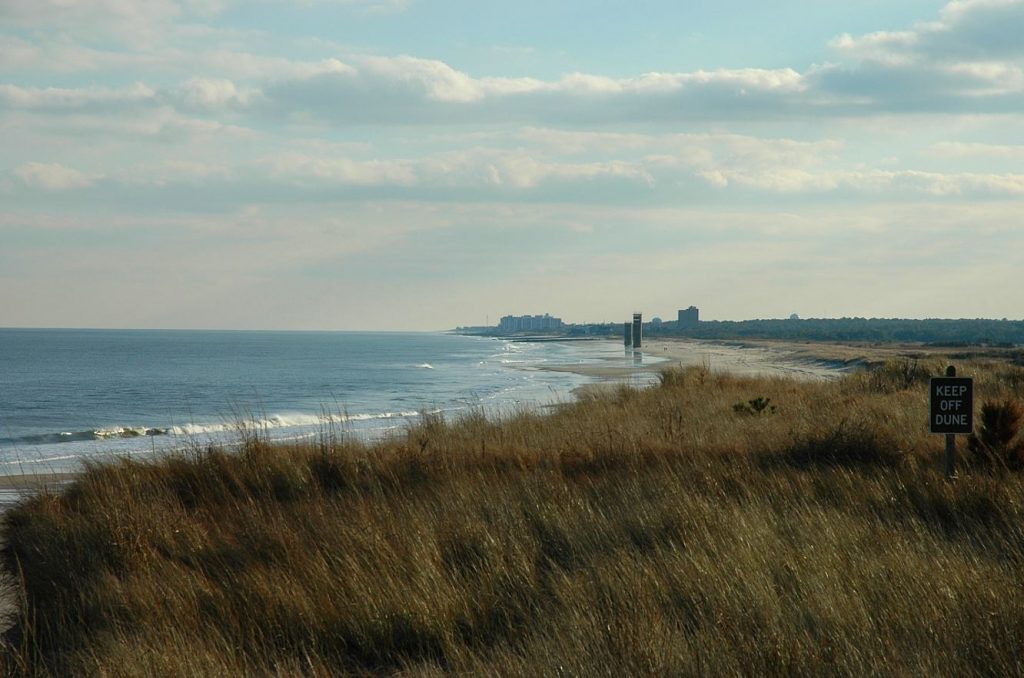 Fall and winter are tough times for Delaware’s beaches, as late-season hurricanes, nor’easters and other storms batter our 62-mile-long coastline taking precious sand from our beaches and dunes with them as they barrel through.

Our beaches and dunes protect inland public and private infrastructure, including houses and roads. The Atlantic Ocean and Delaware Bay beaches and dunes also provide recreational opportunities to residents and visitors and habitat to an array of plants and animals. They also protect against rising sea levels brought not just by storms, but also climate change. Delaware is the lowest lying state in the nation, with the lowest mean elevation, at 60 feet.

Dunes and beaches serve as our frontline defense against wave action that causes erosion during coastal storms. Erosion occurs in places where nature moves sand off of our beaches. Beach nourishment projects do not change the forces of nature that cause erosion, but they restore the sand that erosion moves away from the beach. By restoring that eroded sand, we can maintain a beach and dune system that is wide and tall enough to protect communities, infrastructure and wildlife habitat from coastal storms.

To get ahead of erosion, the Delaware Delaware Department of Natural Resources and Environmental Control works on numerous projects every year to nourish our dunes and beaches. These projects, led by the Shoreline and Waterway Management Section, introduce sand into the shoreline system, offset the effects of erosion and replace the sand that is lost to storms and wave action.

Beaches are geologic features that are constantly shaped and reshaped by wind and waves. If beach nourishment were not performed, nature would move sand on, off and along the beaches. Over time, the result at most of Delaware’s beaches would be a gradually narrower and smaller beach. One notable exception is Cape Henlopen which has naturally grown over time thanks to the arrival of sand from beaches all along Delaware’s Atlantic Ocean coastline.

Narrow beaches provide less space for people and animals to use them, reducing their value for tourism and habitat. Also, because the beach is a natural buffer between community infrastructure and the ocean or the bay, a smaller beach provides less protection against coastal storms.

Over longer time periods, continued erosion would move the shoreline farther inland until community infrastructure would face risks of flooding and damage from daily tides and waves. 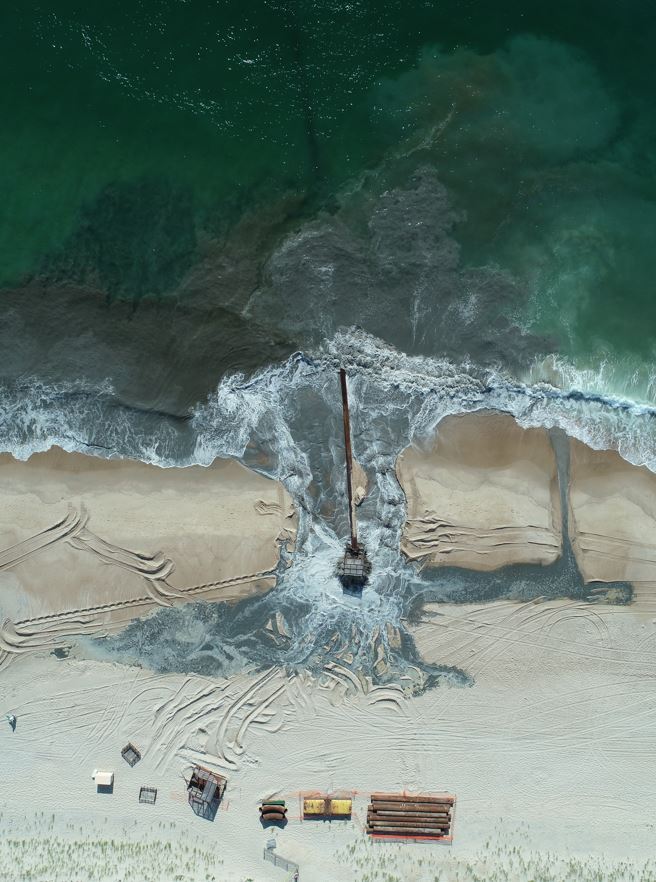 Over the years since then, with periodic nourishment following on from the initial construction, and because of the natural along-shore movement of sand, the entire 26-mile Atlantic Ocean coastline experienced a reversal of erosion trends. That includes public beaches, private beaches and state parks.

Communities benefit from coastal storm protection; healthy beaches attract more than $3 billion in tourism to the state each year and habitat in the more natural areas of our state parks is growing as well.

This winter, the Shoreline and Waterway Management Section is working in the Slaughter Beach, Pickering Beach, Kitts Hummock, Bowers and South Bowers communities.

The beaches and dunes in sections of these communities ranked high in DNREC’s 2020 assessment of beach vulnerability, and planning has been underway for a small-scale nourishment project since mid-2021.

Recent beach surveys and monitoring by DNREC, together with resident and community feedback, show these communities were among the most impacted by coastal storms that produced widespread damages throughout the Delaware Bay shoreline in the fall of 2021.

How Storms Damage the Coast

Coastal storms bring high water levels and big waves that combine to move sand off the beach. Sometimes sand is pulled offshore during a storm, and sometimes it is pushed inland if the beach and dune are over-washed. During calm weather, waves can return that offshore sand to the beach naturally. But sand also moves along the shore, so we typically don’t ever get a complete natural recovery. In Delaware, sand moving along the shore from south to north leaves communities and ends up in Cape Henlopen State Park. 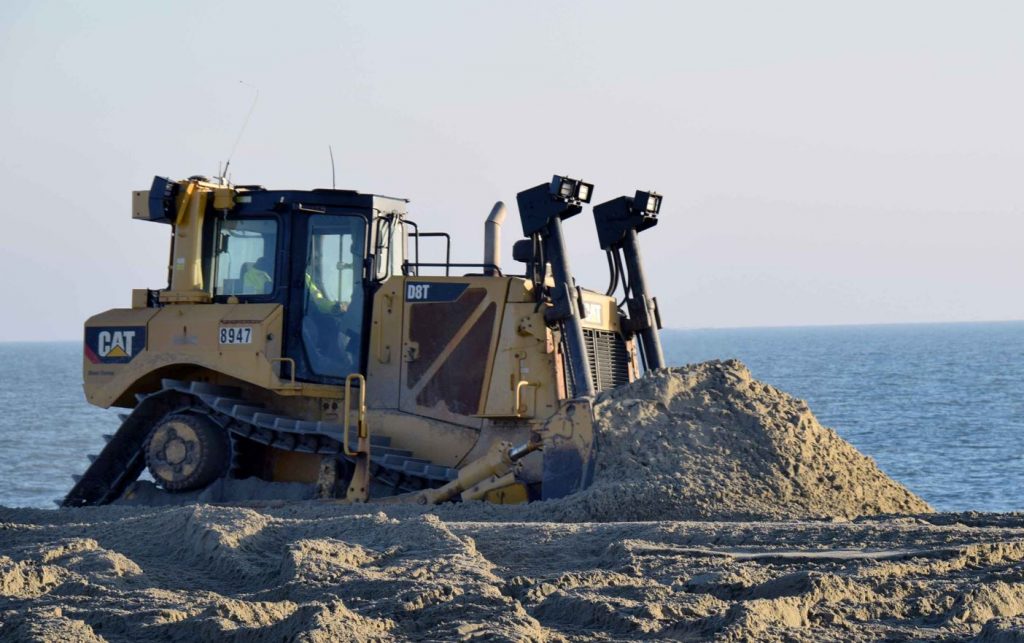 Although wind might blow some sand around, generally sand that washes over a beach does not have a natural way to get back to the beach. The Delaware Department of Transportation and DNREC coordinate to clear public roads of sand that has washed over the beach and dune and return as much as possible to the beach.

Because there is usually a net loss of sand from community beaches after an extreme storm, DNREC monitors the condition of beaches during and after these punishing storms. Sometimes the DNREC Shoreline and Waterway Management Section mobilizes its survey team to assess the conditions and collects survey profiles of the beach and dune. This helps the section plan for future nourishment projects and management of the beaches.

If a storm is extreme enough to warrant the declaration of a federal disaster, then additional federal money may be available through the Federal Emergency Management Agency or USACE to repair beach erosion caused by the disaster.

Which Beaches Get Nourishment? 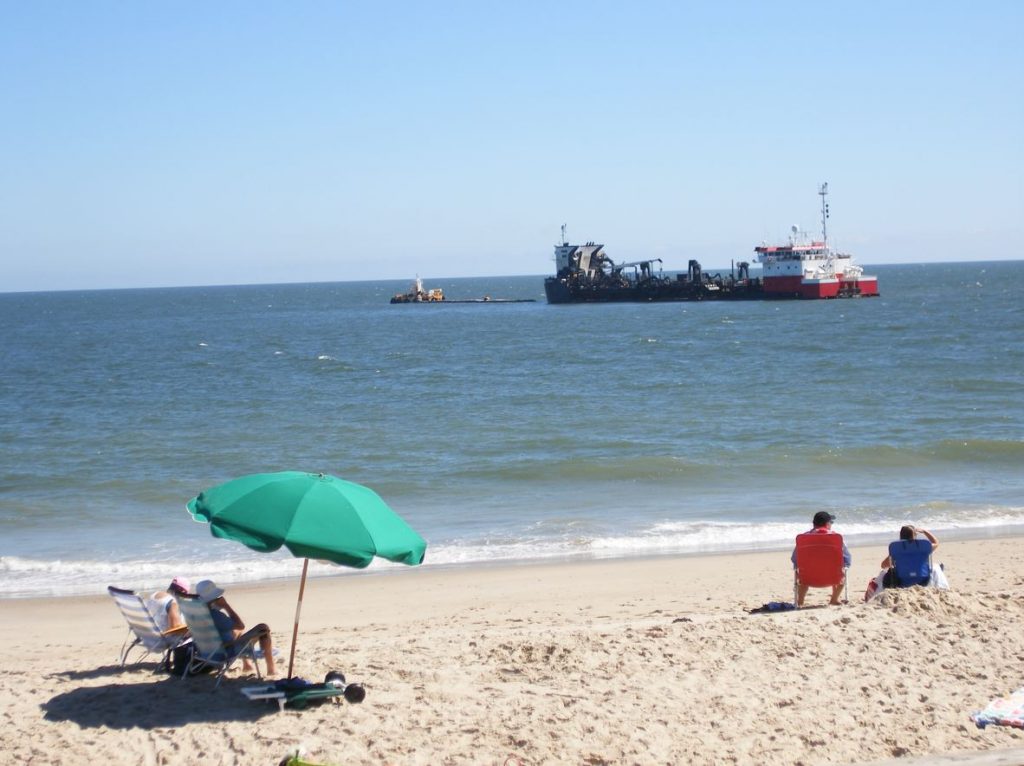 The state only performs beach nourishment on public beaches. In order to be part of a project in which the USACE is involved, the beach must also meet certain public accessibility requirements.

For those projects in Lewes, Rehoboth Beach, Dewey Beach, Bethany Beach, South Bethany and Fenwick Island that are cost-shared between DNREC and USACE, the USACE has developed a design that includes periodic nourishment at a particular interval usually between three and six years. Those projects are dependent on funding being available at both the federal and state levels.

For projects outside those areas, including most of the Delaware Bay beach communities, the state uses a data-driven prioritization system to determine where to spend beach nourishment funds. The prioritization is updated approximately every year, and considers things like how big the beaches and dunes are, how quickly erosion moves the shoreline inland and how much infrastructure is at risk if nourishment were not performed.

There are two ways to get sand onto the beach during a nourishment project and one or the other will be used depending on where the nourishment sand is coming from to begin with. If sand is coming from an inland source, like a quarry or a borrow pit (a pit from which sand or gravel is taken for use as fill at another location) – or even from another section of beach – then it will be hauled using dump trucks and traditional earth moving heavy equipment.

If sand is coming from an offshore source, then it is removed from the ocean or bay floor using a dredge and then moved onto the beach using a series of pipes and pumps.

After the sand arrives on the beach, bulldozers spread it into a shape that has been designed to perform a particular role – like protecting communities from coastal storms or providing areas for recreation or habitat.

Small-scale projects might use one or two bulldozers, an excavator and off-road dump trucks to move sand from a central receiving location to its final destination on the beach. Large scale projects use large hopper dredges capable of carrying thousands of cubic yards of sand at a time. For reference, a tri-axle dump truck holds about 15 cubic yards. 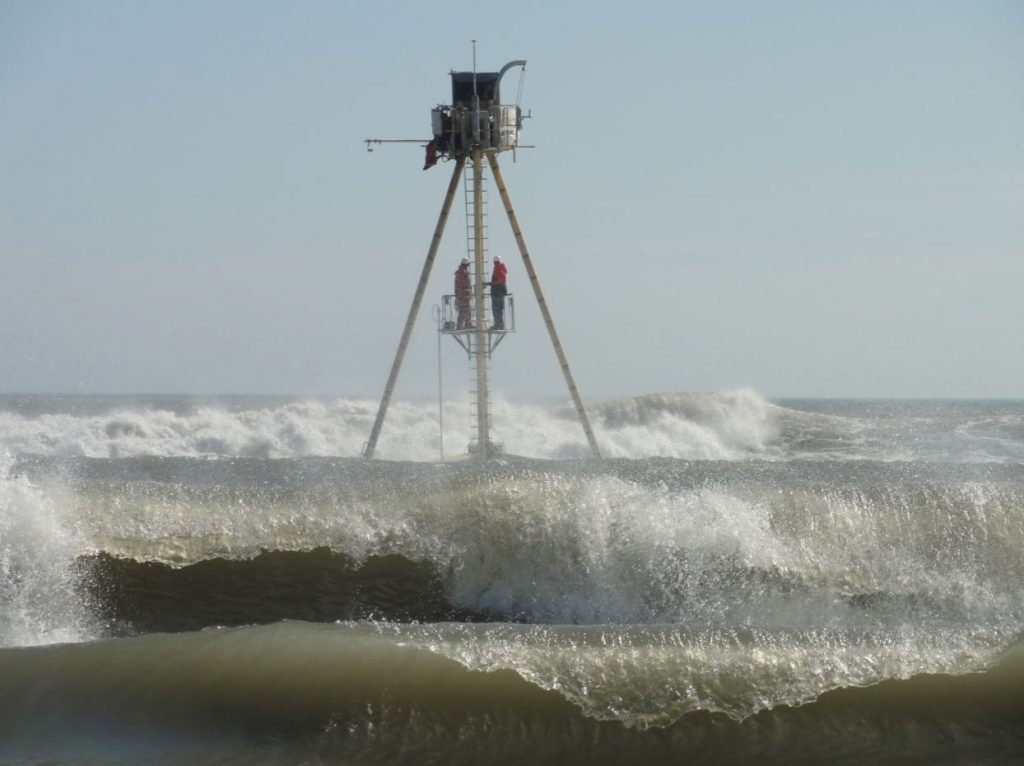 The large projects also use pipes to pump sand along the beach, bulldozers to shape it into the final design, excavators to move pieces of pipe, screening baskets to catch large rocks and debris so they don’t end up on the beach, and an array of special support equipment.

One of the most popular pieces of special equipment that people enjoy watching is the “CRAB” (Coastal Research Amphibious Buggy) which is a 30+ foot-tall tripod on wheels that drives into the ocean to survey the beach nourishment project as it’s being built.

Because of all of the heavy equipment, beach nourishment projects can be dangerous and crews take special care to ensure safely. The immediate work areas are usually fenced off but people can still get a good view of the action from a short distance away.

DNREC pays for beach nourishment using funds generated by the state accommodations tax – DNREC receives one-eighth of the 8% tax specifically for shoreline management – and funds appropriated for Shoreline and Waterway Management by the General Assembly.

We Can All Help Our Beaches and Dunes

The beach is a dynamic place, changing year to year and day to day depending on the wind, water and waves. No two nourishment projects are the same. If Delaware experiences a stretch of calm weather, then sand will remain in place for longer than if we experience a series of storms. An increase in storminess usually means more sand will need to be replaced to offset the losses.

The DNREC Shoreline and Waterway Management Section manages beaches as a natural resource according to the mandate of the Beach Preservation Act and the vision, mission, and values of the DNREC. A robust beach and dune is beneficial to all users, including people, plants and animals.

Property owners and visitors can preserve and protect beaches and dunes in several ways, through their day-to-day actions, by taking part in volunteer efforts such as beach grass planting or by adopting a beach.

Jesse Hayden is the environmental program administrator in the Shoreline and Waterway Management Section of the DNREC Division of Watershed Stewardship.