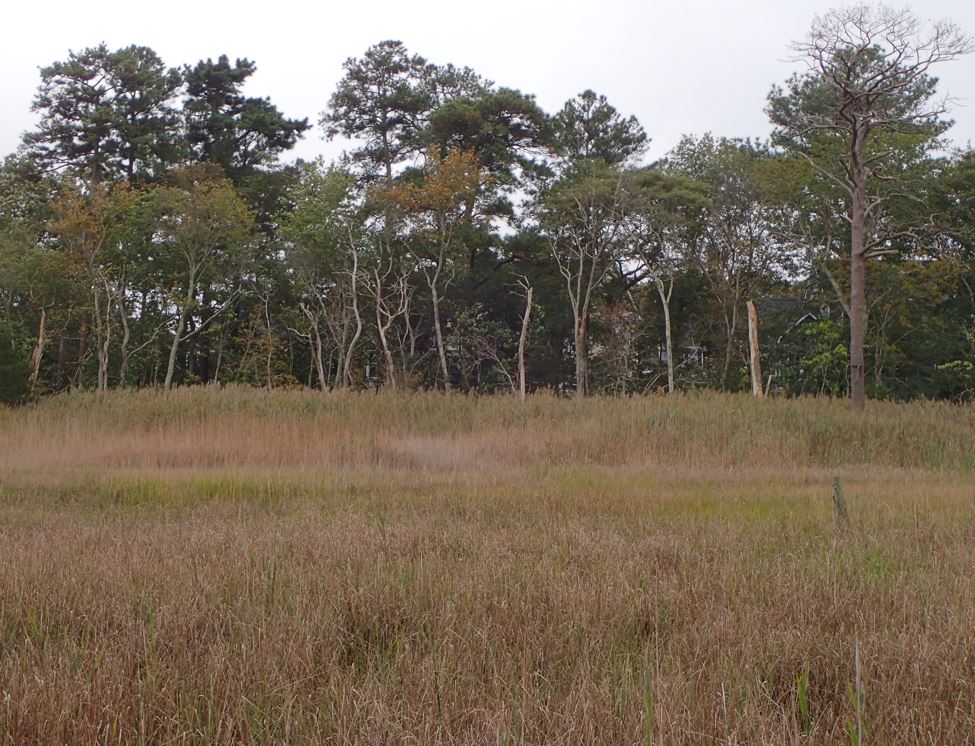 It happens more frequently when it hasn’t rained for a while, usually in the summer. People will call the Delaware Department of Natural Resources and Environmental Control to report a salty taste in their water. Or, maybe you’ve noticed dead trees along tidal rivers. Or perhaps you’ve seen the increasing number of “ghost forests” as you cross the bridges on Route 1 – where trees stand alone, stark and bare of greenery.

These are examples of the effects of saltwater intrusion and saltwater inundation, a growing problem in Delaware – one that is being monitored by DNREC’s Divisions of Water, Watershed Stewardship and Climate, Coastal and Energy.

Saltwater intrusion is the process of saltwater moving underground into areas of freshwater in an aquifer where water is present. It’s caused mainly by overuse of the aquifer by large capacity wells such as industrial, agricultural and public providers.  Other long-term causes may include extended drought and sea level rise.

Both are affecting Delaware and DNREC is studying where and by how much it may affect us in the future.

You may think sea level rise only affects the coast, but saltwater intrusion and inundation extend into all of our tidal rivers, too. The salt line, or highest upstream place that saltwater reaches, is moving farther upstream and affecting habitats as far inland as Route 1. But the problem is most prevalent along or close to the coast, near areas of the Atlantic Ocean, the Delaware Bay and River and the Inland Bays. 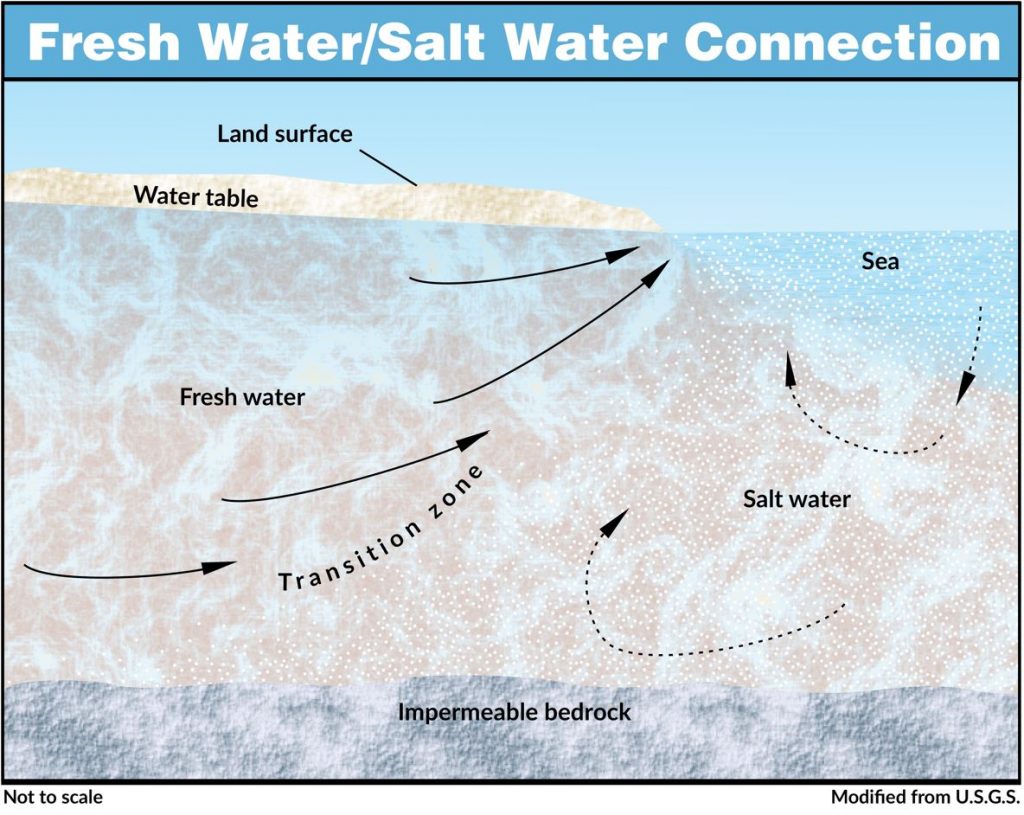 The mid-Atlantic is a sea level rise hotspot – meaning that sea levels are rising here more rapidly than in other parts of the country. As sea level rise accelerates, so does saltwater intrusion and inundation, as salty waters rise and push further inland both above and below ground. In the future, more wetlands and forests will be affected, and more farmers will have to contend with saltwater in their water supplies or on their fields. Coastal landowners will see changes in their yards. Not to mention more salty-tasting drinking water.

Saltwater intrusion does not occur in one precise location, but rather over an area known as the transition zone, where fresh and salt water are separated. This zone is dynamic and always moving and can be affected by over-pumping of an aquifer by a community of domestic wells, large capacity irrigation, public wells, seasonal changes, flooding from inundation and tidal influences.

Areas battered by storms can be affected by saltwater inundation like the Prime Hook National Wildlife Refuge in Sussex County, one of the worst cases of inundation ever in the state, where coastal dune breaches flooded freshwater impoundments and adjacent forests and croplands. The first major breach of the dunes occurred in 2011 during Hurricane Irene. But Superstorm Sandy in 2012 caused major damage to the beach barriers. The sudden influx of salt water killed off freshwater wetland plants, trees and crops, leaving behind mudflats, dead forests and damaged agricultural fields.

A major restoration project was launched soon after by the U.S. Fish and Wildlife Service to rebuild the coastal dunes and to also allow tidal access and improved water flow inside the impoundments. DNREC provided monitoring information to characterize the damage, as well as information to calibrate the models used for design and post-restoration recovery. Prime Hook is improved today, but it is not back to its original condition – the new design is a more natural and sustainable tidal system.

What DNREC Is Doing

Understanding the impacts of saltwater intrusion and inundation requires extensive monitoring, which DNREC has been conducting for decades. Most recently, DNREC’s Wetland Monitoring and Assessment program (WMAP) performed a study at 15 sites along the coast to examine wetland habitat impacts from inundation and sea level rise. Wetland maps and aerial imagery suggest that many coastal wetland habitats are changing from freshwater wetlands to brackish or saltwater wetlands over time, and WMAP’s study documented how plant communities responded to wetter and saltier conditions. 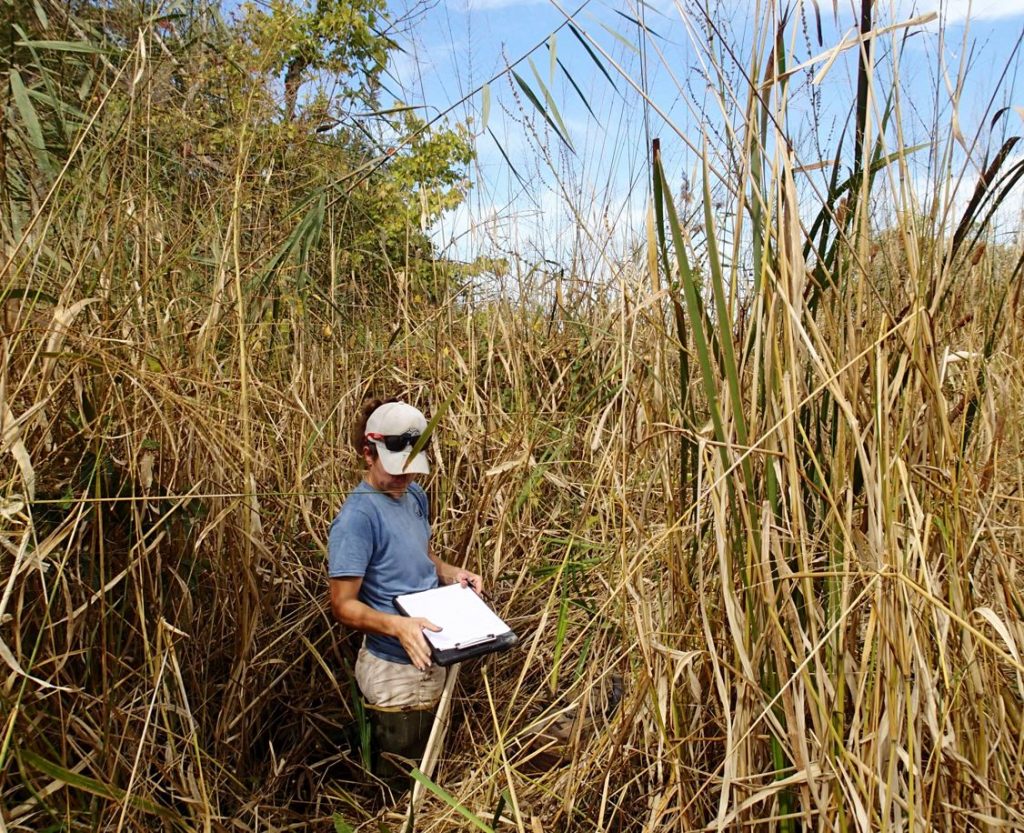 WMAP scientists observed that as salt water slowly moves inland, it kills freshwater wetlands plants and paves the way for plants that are more salt-tolerant. One troubling trend is that native salt marsh plants are not replacing freshwater forested wetland plants as they die off and retreat. Instead, the invasive reed phragmites is moving in before native species can take hold leading to poor quality habitat. In some places, rising water levels have drowned out all plants, reducing the amount of useful habitat.

As sea level rise continues and coastal habitats are stressed and flooded, it is vitally important that these habitats have natural space where they can move upland. Commonly known as marsh migration, this process is often prevented in developed areas by sea walls, bulkheads, berms or elevated roads. Without the space to migrate, many coastal habitats will shrink and disappear.

DNREC’s Delaware Coastal Programs (DCP) is also supporting studies of saltwater intrusion and inundation to understand the severity of the issue and where it is happening, when it is expected to occur and by how much. DCP has been supporting local research by providing infrastructure like monitoring wells, marsh access and data on water levels. Specifically, DCP has funded a study with the Delaware Geological Survey to model saltwater intrusion. DCP is also supporting other studies underway, including with the University of Delaware and other partners to monitor water in the changing coastal environment in Delaware.

DNREC’s Division of Water began monitoring saltwater intrusion in several high-capacity industrial and public wells in the Potomac aquifer near the Delaware River in New Castle County in the 1970s in response to concerns about increased water demand drawing in saltwater. DNREC water quality results show that saltwater intrusion is not a major issue there right now. 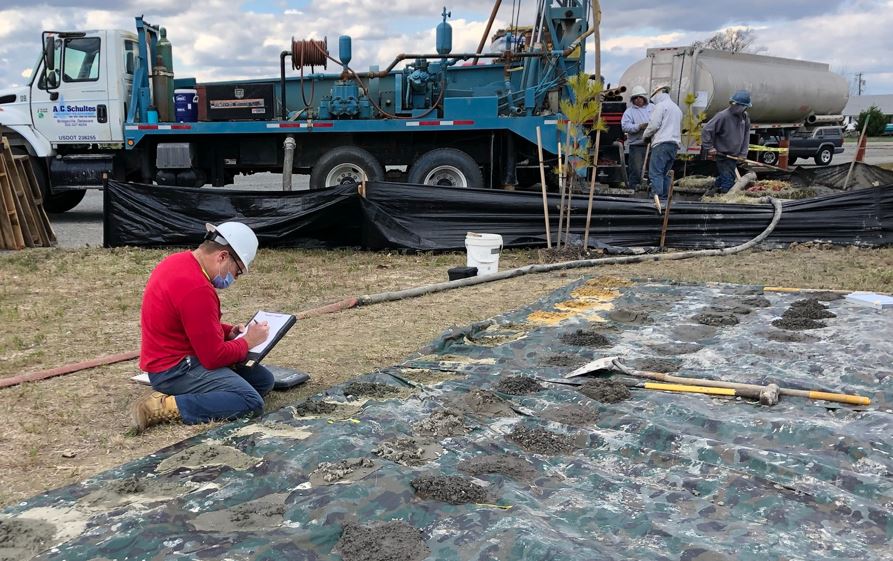 However, Division of Water scientists have found high salt concentrations in freshwater aquifers in the Town of Bowers.

In 2020, DNREC installed a network of monitor wells in five different aquifers in the town, some of them used for water supplies. The wells will be monitored long term as part of a statewide groundwater monitoring network.

Right now, all wells being installed in the Town of Bowers are reviewed before they are issued to ensure proper well construction within aquifers free of salt water. In addition, a statewide saltwater buffer has been created around every tidal water body. Both actions allow the Division of Water to help safeguard the well construction from potential saltwater impacts.

In addition, the Division of Water is supporting the Delaware Geological Survey in the installation of a monitor well network throughout Kent County to study of the effects of irrigation pumping on salt levels in well water in the East Dover area.

Samples are taken four times a year to monitor the salt concentration in the aquifer the well is drawing from. Currently, the data shows the overall salt levels are stable in the aquifers being monitored.

The Division of Water is working with coastal communities like Bethany Beach and Rehoboth Beach to monitor their groundwater supplies more closely for early detection of saltwater to prevent long-term problems before they occur.

DNREC is expanding saltwater intrusion monitoring across the state. Wells are being installed and real-time instruments are being used to evaluate water levels and quality. In addition, many coastal communities are now required to establish saltwater monitoring networks as part of their well permits. These networks place monitoring wells between a pumping well and a saltwater body to see if the pumping of a well is influencing salt concentrations in the monitoring well before it reaches the pumping well. 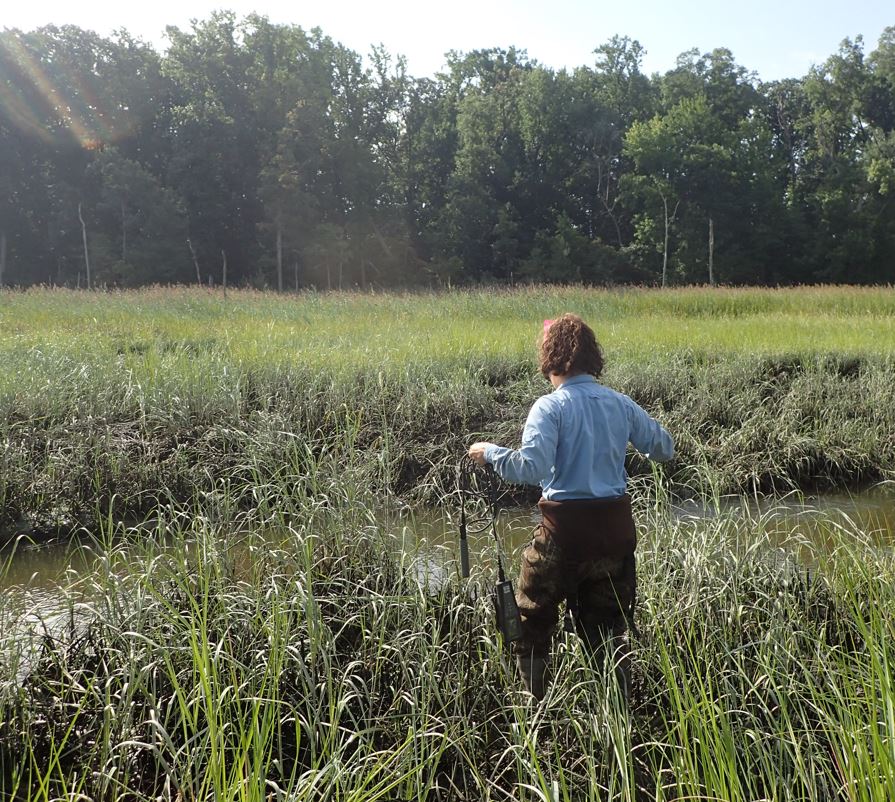 What Can We Do

Saltwater intrusion and inundation cannot be stopped. There are numerous day-to-day changes we can all adopt to slow saltwater intrusion, like using less water by running your dishwasher only when it’s full or not watering your lawn during a drought. We can also adapt to saltwater inundation by changing what we grow in areas receiving more salt water – whether you are farmer growing crops or a landowner planting more salt-tolerant trees and shrubs. The U.S. Fish and Wildlife Service is exploring an option to help salt marshes migrate into former forested areas to prevent phragmites and loss of habitat.

The rapid rate of development and building in Delaware, especially closer to the coast, puts an added strain on freshwater aquifers by decreasing freshwater replenishment and threatening the equilibrium that holds saltwater back.

DNREC is still collecting data to quantify the extent saltwater intrusion and inundation is occurring or might continue to worsen in the future.

However, climate scientists agree that sea level rise will continue to increase in the future and thus saltwater intrusion and inundation will become worse in the years ahead. But several other factors, like more extreme weather events and coastal flooding farther inland, drought, the continued increase in water demand as coastal communities grow and increased crop irrigation near saltwater bodies will also increase the severity of saltwater intrusion and inundation.

Learn more about how to protect and test your well, and what to do if your well does become contaminated with salt water.

Amber Bataille is a hydrologist with the DNREC Division of Water.

Alison Rogerson is an environmental scientist in the Wetland Monitoring and Assessment Program within the DNREC Division of Watershed Stewardship.

Dr. Robert Scarborough is an environmental program manager with the Delaware Coastal Management Program within the DNREC Division of Climate, Coastal and Energy

Scott Strohmeier is a hydrologist with the DNREC Division of Water.

Dr. Kari St. Laurent is the research coordinator with the Delaware National Estuarine Research Reserve within the DNREC Division of Climate, Coastal and Energy.