Shortly after I started at the Division of Parks and Recreation in late 2014, my supervisor told me I would need to reestablish the Time Traveler program. While I initially panicked, I soon saw the potential to develop an archaeology program not only for the division but also for the public.

Today, the Time Traveler program offers a hands-on experience for volunteers to get involved in cultural heritage work at our state parks. And you can literally get your hands dirty. One of our ongoing projects is excavations at the historic John Bell House in Dover.

Before we delve into the dig, let me explain some history about the John Bell House. In 1727, a mariner from Philadelphia named John Bell bought a lot on The Green at the center of town. Dover was founded as the “court town” for Kent County in 1683. It grew into a market town, and the provincial capital was moved there in 1777 from New Castle to be safe from British warships. Dover became the permanent state capital in 1781.

Today, the John Bell House is a small clapboard-covered cottage that served as an outbuilding on the tavern property. It appears to have been built in the middle of the 18th century and was used for many purposes over time. By 1824, the building housed Dover’s post office and possibly a print shop. From about 1866, through the 20th century, various lawyers and realtors occupied the building. The state purchased the building in 2005, and it was restored to its historic appearance in 2009 to 2010. It’s now used as the interpretive programming hub for the First State Heritage Park. 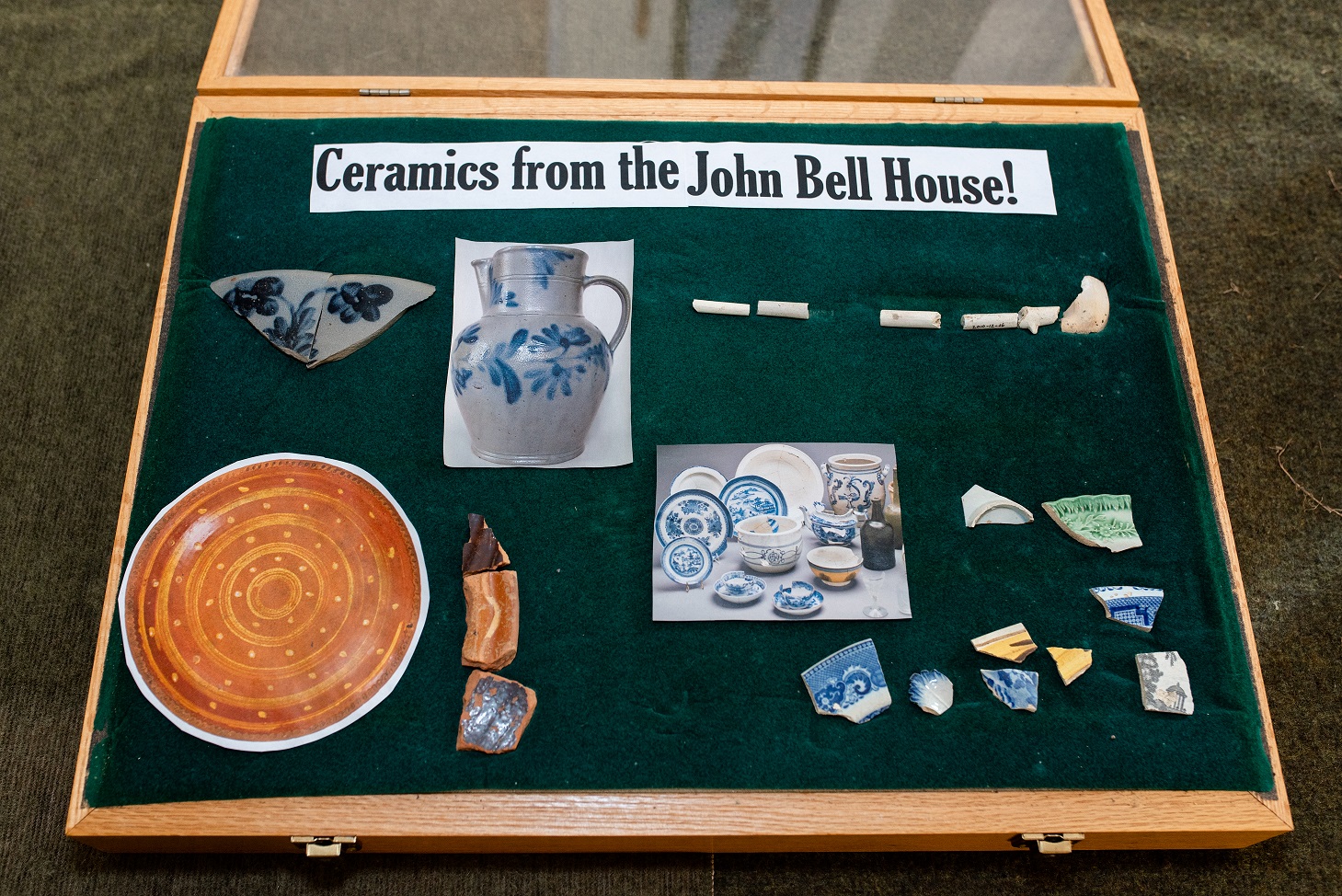 The goal of the ongoing archaeological dig at the John Bell House is to learn about the details of everyday life in colonial Dover and at the Bell Tavern in particular.

Archaeological excavations in 2010 recovered artifacts hinting that there was material from the colonial era well-preserved.

It’s important to note that before modern standards of sanitation, it was typical for household debris to be swept out the backdoor and into the yard. Archaeologists call the resulting artifacts at historic residences a “sheet midden.” To better understand this history of the Bell House and the operation of the Bell Tavern, we wanted to recover more artifacts from the midden. One unfortunate aspect of this practice is that the artifacts recovered are generally very small fragments, most only as big as your fingernail.

The current dig started in 2017, with excavation of three, three-foot square test areas across the rear of the property. Archaeologists excavate in square units on a grid to help keep track of the location of finds across a site. The distribution of different artifact types can indicate the activities across a space.

Surprisingly, our finds include many fragments of fine tea and tableware, among them fashionable English and Chinese varieties. This is not really what might be expected at a tavern where the primary activity was likely drinking beer. Or was it? Taverns were often important centers of community interaction and socializing may have included fashionable tea parties.

Another group of finds supports the reported use of the Bell House as a print shop. Several pieces of movable printer’s type have been recovered, including a capital S.

Research on the finds we have made is continuing, and we hope to continue the excavation to further document the uses of the Bell House and tavern yard, and the details of tavern operation and family life at the site. Our results are already enriching the stories we tell about colonial Dover at First State Heritage Park.

The ongoing dig at the Bell House is just one of many Time Traveler projects. The Division of Parks and Recreation investigates sites all over Delaware at state parks and wildlife areas, and there are opportunities for you to help with artifact processing, historical collections, document research and more.

Time Traveler is open to all ages, with students as young as 10 welcome with an accompanying adult. No experience or special training is necessary.

However, due to the pandemic, opportunities are currently limited. To find out more, join our mailing list to get the latest information and other news. It’s easy to unsubscribe, and your email address will never be shared with others. Just send an email to Thomas.Summers@delaware.gov.

John P. McCarthy is the former cultural preservation specialist with DNREC’s Division of Parks and Recreation, as well as a registered professional archaeologist and architectural historian.

A version of this article appeared in the winter 2019 issue of Outdoor Delaware and has been updated.