Over the past century, Delaware has experienced a sea level rise of more than one foot. According to the Intergovernmental Panel on Climate Change (IPCC), the rate of sea level rise will increase over the next century. This will lead to the loss of coastal wetlands in Delaware.

For Delaware, sea level rise is especially concerning because the coastline is no longer able to adapt to the rising waters as naturally as it has been able to in the past. In some areas, human development and alterations to the landscape will prevent wetlands from migrating inland which could contribute to shoreline erosion rates.

With the rising sea and the inability of the land to adapt, Delaware can expect:

Why is Sea Level Rising in Delaware? 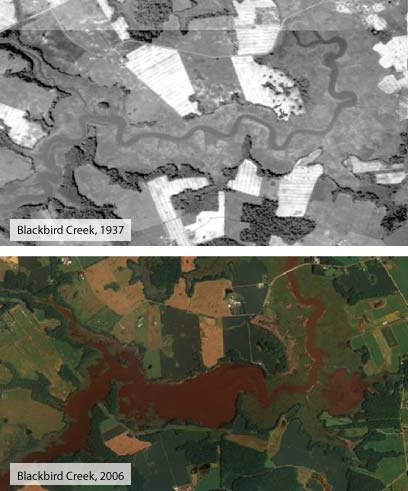 With the increase in the average global temperature in recent years, polar regions of the globe that have historically been covered in ice are now melting rapidly. When these regions of glacial ice melt, the resulting water enters our oceans, thus raising the sea level directly.

Additionally, as the water heats with the increase in average global temperature, it expands and also contributes to sea level rise.

Meanwhile, Delaware (and the east coast of North America) is experiencing a naturally driven sinking of the land. In other words, the tectonic plate Delaware sits on is naturally sinking compared to the land level of the surrounding tectonic plates.

This puts Delaware at increased risk for the impacts of rising sea levels; as the sea is rising, Delaware is sinking, thus the rate of sea level rise in Delaware is faster than in other parts of the world.

How Much Will Sea Level Rise?

The Delaware Department of Natural Resources and Environmental Control (DNREC) has agreed upon three scenarios for local sea level rise in the next century:

Scientists at DNREC Coastal Programs and the University of Delaware have developed an easy to use Sea Level Rise map showing the possible inundation of Delaware land based on these three scenarios.

What Does This Mean for Delaware Wetlands?

As the sea level rises in Delaware, coastal wetlands will be lost due to submergence under the rising sea as well as erosion of the soil by frequent severe storm events.

However, due to development, roads and infrastructure, wetlands are now unable to migrate inland and thus are gradually eroding away and sinking beneath the rising sea. This leaves coastal residents and businesses less protected from flooding and storms.

For wetlands further inland, rising sea levels mean increased salinity levels. With the saltwater coming in with the high tide further inland, these freshwater wetlands could be changed to more saline systems thus altering the plant and wildlife communities.

Freshwater wetlands provide many benefits to Delaware including serving as crucial habitat for important commercial species, rare wildlife, and many recreational opportunities for Delaware residents.