Delaware is among six Chesapeake Bay Watershed states – along with Maryland, Virginia, West Virginia, Pennsylvania, and New York – and the District of Columbia committed to a federal-state initiative to develop a pollution “diet” that will help restore the water quality of the Bay and its tidal waters by 2025.

The Bay and many streams that drain to the Bay from each state suffer from excess pollution and must be cleaned up. 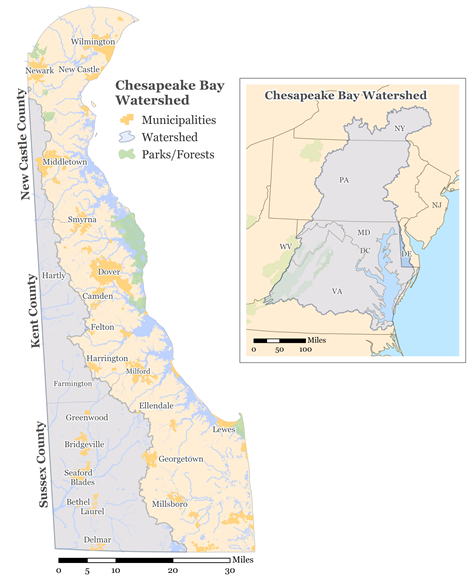 The Environmental Protection Agency is leading the effort by developing a Total Maximum Daily Load (TMDL) for nutrients and sediment for the Chesapeake Bay and its tidal branches. A TMDL is the maximum amount of a pollutant that a body of water can receive and still meet water quality standards that protect humans and aquatic life.

Delaware has already established State TMDLs for impaired waters in the Chesapeake, but the EPA TMDL will call for additional reductions.

As part of the TMDL, each jurisdiction is required to develop a Watershed Implementation Plan (WIP) that details how load goals will be achieved and maintained into the future.

This work is being done in three phases. With each successive WIP, the detail of load goals and actions to achieve those goals will become increasingly more specific.

Drafts and final Phase III WIPs were due to the EPA in Feb. 2019 and June 2019 respectively.

You Can Help Protect Delaware’s Waterways

Delaware’s Phase I WIP was finalized Nov. 2010 and was used to develop the EPA TMDL that was released Dec. 2010.

Phase II work occurred in 2011 and early 2012. The Phase II WIP provides additional details about the partner organizations who will implement portions of the WIP, specifies when actions will occur, and identifies the resources necessary for success. Additionally, some of the implementation goals identified in the Phase I WIP have been parsed down to a smaller scale, such as at the County level. Finally, the Phase II plan established implementation goals for 2017, which was when 60 percent of the necessary nitrogen, phosphorus, and sediment goals were to be achieved.

The Chesapeake Bay TMDL document called for an assessment in 2017 to review progress toward meeting the nutrient and sediment pollutant load reductions necessary for Bay restoration. This midpoint assessment measured the Bay jurisdictions’ progress toward meeting the 2017 goal of having practices in place to achieve 60 percent of the necessary reductions compared to 2009 levels.

The Phase III WIP will provide information on what actions the jurisdictions intend to implement between 2018 and 2025 to continue to meet the Bay TMDL restoration goals.