The DNREC Division of Fish and Wildlife sponsors the annual Sport Fishing Tournament to promote recreational fishing in Delaware. The Tournament recognizes both young and adult anglers for outstanding catches.

The tournament is free and open to the public. It runs from January 1 through December 31 each year.

Anglers who submit an application for their trophy catch receive an award, as well as a citation showing the species of fish caught. The citations are suitable for framing. They feature color reproductions of original paintings by artist Duane Raver, Jr.

Anglers may apply for and receive multiple citations within a year, even for the same species. But only one saltwater award and one freshwater award will be issued to any one individual during the tournament year. For more information, please review the Delaware Sport Fishing Tournament Rules.

After weighing the fish at an official Tournament Weigh Station, each angler is responsible for mailing his own official entry form to the Tournament Director’s Office. Entries must be received by January 31 of the year following the year which the fish was caught.

All potential state record fish must be examined intact by a qualified person from the Division of Fish and Wildlife.

To promote conservation ethics, the Tournament includes awards for catching and releasing eligible species. Live Release Awards are open to both adult and youth anglers. The fish must be released immediately. An angler must make the catch in Delaware waters or off Delaware’s Atlantic coastline. 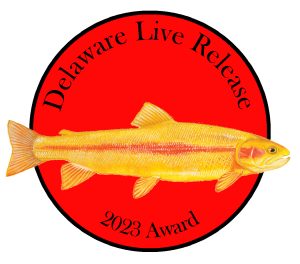 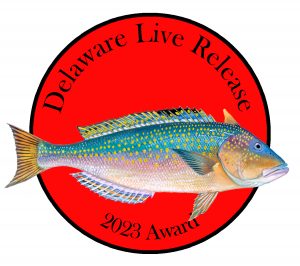 Live release entry forms are available online or from any Tournament Weigh Station. They must be mailed to the Division of Fish and Wildlife within 30 days of the catch. The entry forms must include information about both the angler and a witness to the actual measurement and live release of the fish.

Anglers who receive citations for five different species within one calendar year will be recognized as Delaware Elite Anglers. They are given a beautiful plaque commemorating this once-in-a-lifetime accomplishment.

Any combination of saltwater and freshwater citations qualifies an angler for Elite status. No more than two of the citations can be Live Release Awards.

Elite anglers may continue to participate in the Sport Fishing Tournament, but will not be eligible for future “Elite Angler” plaques.

Each year, the Division of Fish and Wildlife recognizes those anglers who bring in the largest fish for each species recognized in the Tournament. The “Big Fish Award” plaques are engraved with the angler’s name, the year, the species caught, and the fish’s weight. 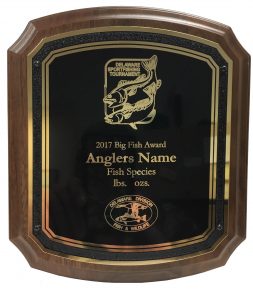